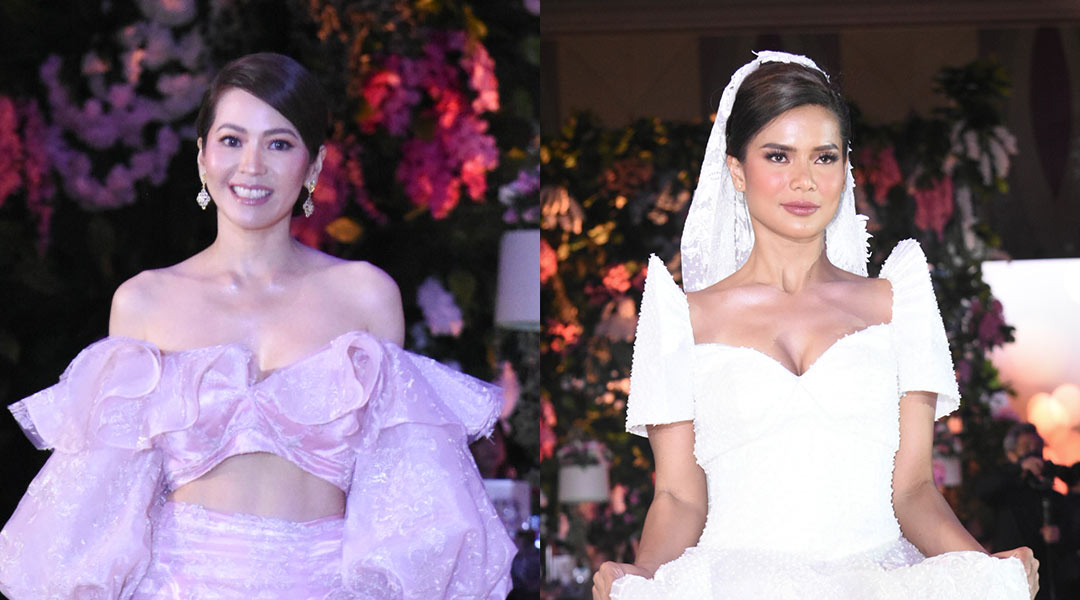 “To Love and To Cherish” also celebrated the designer’s 75th birthday.

Called “To Love and To Cherish,” the fashion show featured the designs of Renee Salud. The fashion legend mixed themes that highlighted his creative flair, from colorful garden blooms to ternos and lovely Filipiniana wear.

Les Fleurs, spearheaded by Jeremy Cristobal, matched this by filling the venue with flowers, providing a magnificent backdrop for the show. He and his team went for a garden wedding concept.

“The venue was adorned with vibrant floral designs accentuated with greenery, transforming Okada Manila’s Grand Ballroom into an enchanting garden,” he says. “To complete the look, the Les Fleurs team incorporated a golden gazebo as the focal centerpiece, providing the perfect setting for a wedding fashion show for Renee Salud’s collection.”

Cristobal is a veteran floral designer who has worked in various hotels in Macau, including the Four Season’s Hotel and St. Regis Conrad. He was also floral designer for major fashion and jewelry labels in Hong Kong such as Cartier, Van Cleef, Franck Mueller, Chanel, and Ralph Lauren.

“At Okada Manila, we always observe strict adherence to safety protocols. In close coordination with fashion producer Patty Chiong’s team, we worked together to ensure that all participants, including the models and Renee’s clients are fully-vaccinated before being allowed to participate,” says Cielo Reboredo, Okada Manila’s vice president for Sales and Marketing.

She says that they are honored to celebrate this milestone with Salud, as it also coincides with the commemoration of his 75th birthday.

Salud is known for being a perfectionist with an impeccable taste and eye for detail. He was the former president of the Fashion Institute of the Philippines; and well recognized as one of the premier designers to Filipino celebrities. He has mounted shows globally including in New York, Paris, Tokyo, and Milan, as well as Sydney. Spanning a fashion career of 60 years and counting, his foray into fashion began when he was about 15 or 16 years old.

“One thing I have observed about him is his penchant for artistry and nobility,” says fashion director Cata Figueroa, who has collaborated with Salud in more than 30 shows. They have worked together since 2012 for Philippine Fashion Week.

The fashion show’s proceeds will be donated to help the Typhoon Odette victims.