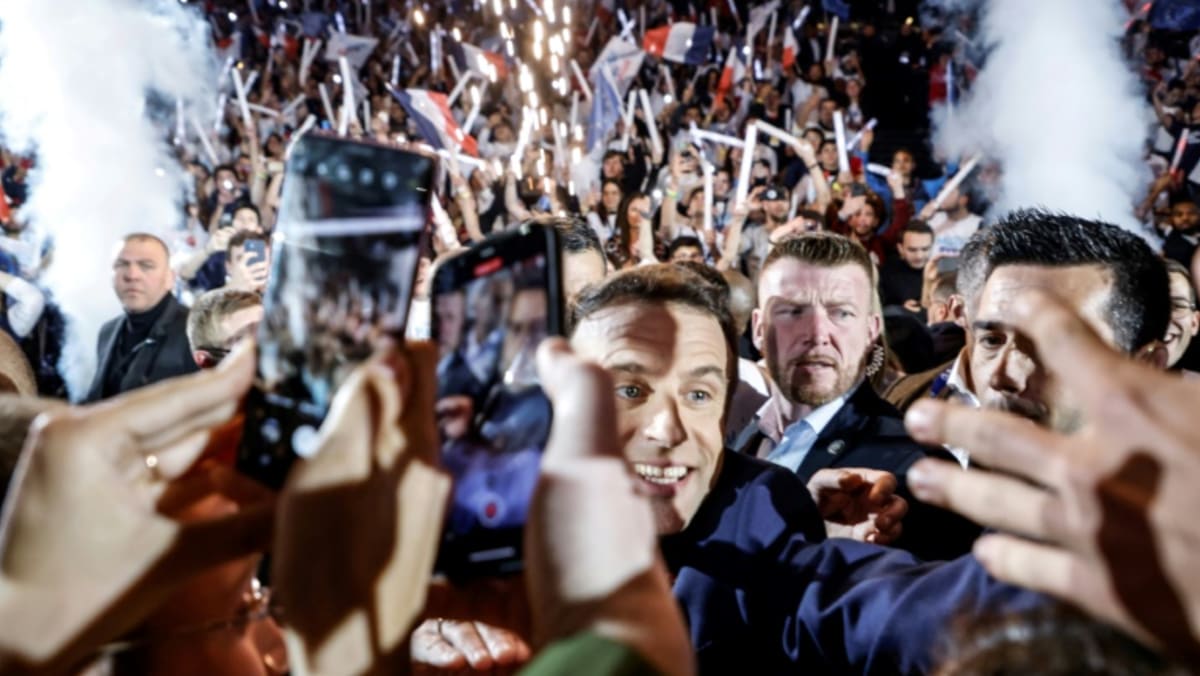 Two and half hours’ drive south of the capital, Donzy has found fame as a national bellwether that has correctly picked the winner of every presidential election since 1981.

“It makes us feel like we’re a part of France and not at the end of it,” says Coudray-Ozbolt of the brief celebrity he and his neighbours enjoy.

Their powers of prediction faltered slightly in the first round of voting in 2017, but were restored in the second when Donzy voted like the rest of the country for Emmanuel Macron, a then 39-year-old newcomer who destroyed the stranglehold of France’s traditional parties of government.

“There’s too much PR,” said the 54-year-old, who makes the controversial French delicacy foie gras. “Every day they announce something. How much of it will materialise?”

As polls show far-right leader Marine Le Pen closing in on Macron, still the narrow favourite, the hesitation of people like Coudray-Ozbolt could prove crucial.

After a highly unusual campaign overshadowed by outside events, the words on many people’s lips in Donzy – like elsewhere in France – are “the crises”.

“There was COVID-19, now the war in Ukraine,” sighed Jacques Martin, a 66-year-old retired policeman who is president of the rugby club.

Local mayor Marie-France Lurier says “people are anxious and they’re finding it difficult to think about the future”.

Three lockdowns since 2020 have brought life repeatedly to a standstill, and now galloping inflation linked to COVID-19 and the Ukraine conflict, is eating into household budgets.

“The biggest, fundamental concern is spending power, the need for salary rises, and worries over the increase in fuel and energy prices,” said Lurier, a left-leaning independent.

All across the village, people are quick to mention sudden price hikes that belie the official inflation rate of just 4.5 per cent.

A local builder said he’d just been notified of a 12 per cent price increase for plaster. The nearest winemaker faces a 53-percent rise in the cost of glass bottles.

Diesel prices at the local supermarket hover near €2 (US$2.18) a litre, up around 20 per cent since the start of the year.

“We’re going out less and we’re not sure what we’re going to do for the holidays,” said 37-year-old Sarah Lesage, a nurse and mother-of-four.

Conversations with the voters of Donzy suggested Sunday’s first-round and the second-round run-off on Apr 24 will be won or lost by the candidate seen as most trusted to find solutions.

Although there was little fervour for Macron in Donzy, there was clear respect by some, admiration even, for his role as the country’s crisis-manager-in-chief.

“With everything that’s going on, at least we have a president that seems to have his head firmly on his shoulders,” said Jacqueline Vincent, 69, clutching baguettes outside a bakery.

Many are grateful for the €100 billion rescue plan announced in September 2020 that has sent the national debt rocketing but has trickled down to places like Donzy.

Four local bars, where people gather over a glass of wine at the end of the day, were kept afloat by government aid through the lockdowns.

“I say ‘Thank you Mr Macron’ for everything I got,” 67-year-old waitress Martine said, adding that her employer had been repeatedly shut during the lockdowns. “I had seven months of salary paid by the state.”

But Macron, a former investment banker, has also earned a reputation for arrogance and high-handedness that is particularly resented in small towns and villages.

A 2018 revolt against him by so-called “Yellow Vest” protesters was sparked as much by his abrasive personality as his pro-business policies and tax cuts for the wealthy.

Distracted by his diplomatic efforts with Russia and Ukraine, he only started campaigning two weeks ago.

Her decision not to play up fears over Muslim immigration to France, her traditional rallying cry, has helped soften her image.

And she has hammered Macron in recent weeks on the record two billion euros spent on management consultancies during his term, an issue that appeared to be cutting through in Donzy.

Le Pen, 53, has also been helped by Zemmour in her quest to detoxify her image.

Having spent a decade trying to erase her party’s reputation for racism and its association with its violent neo-Nazi fringe, Le Pen found an ideal foil in Zemmour.

The best-selling author of books such as “French Suicide” has several convictions for racist hate speech and wants to deport a million foreigners.

A picture of him giving the finger to a protester in Marseille last November reinforced his image as a cranky political maverick.

“Compared to him, everyone looks like a moderate,” said Arnaud Mercier, an expert on political communication at Paris Pantheon-Assas University.

Polls suggest Zemmour will score around 10 percent in Sunday’s vote, but he has opened up new political space for Le Pen.

He has also normalised the idea of the “Great Replacement”, a white supremacist conspiracy theory suggesting indigenous Europeans are being deliberately replaced by immigrants.

Mayor Lurier, a retired social housing administrator, is frustrated that the left-wing Socialists have failed to reinvent themselves since Hollande lost power in 2017.

She regrets the decline of France’s two traditional political parties, which have been peripheral in this campaign, and is unconvinced by hard-left populist Jean-Luc Melenchon.

The former Trotskyist is the leading left-winger in a race that could still spring a surprise on Sunday.

“Political parties, whether of the left or the right, provided a framework and the fact that we don’t have that any more means that things are breaking down,” said Lurier.

Socialist candidate Anne Hidalgo, the mayor of Paris, is polling around two percent.

The nominee for the once mighty right-wing Republicans party, Valerie Pecresse, is trending downwards on around 10 percent in fourth or fifth position.

Worried by the biggest war in Europe since 1945 and the largest inflation crisis since the 1970s, France’s election is now seen as highly unpredictable.

Polls show around a quarter of voters are unsure of who to vote for on Sunday, and the same proportion might abstain in what would be a record.

The country appears to be heading for another run-off between Macron and Le Pen, who faced each other in 2017 not long after Britain had voted for Brexit and the United States had elected Donald Trump.

With Le Pen breathing down his neck, Macron has been trying to rally voters by sounding the alarm that his promise of continuity and steady leadership might not be enough.

“Look at what happened with Brexit, and so many other elections: what looked improbable actually happened,” he warned at his first rally last weekend.

“Nothing is impossible,” he added.