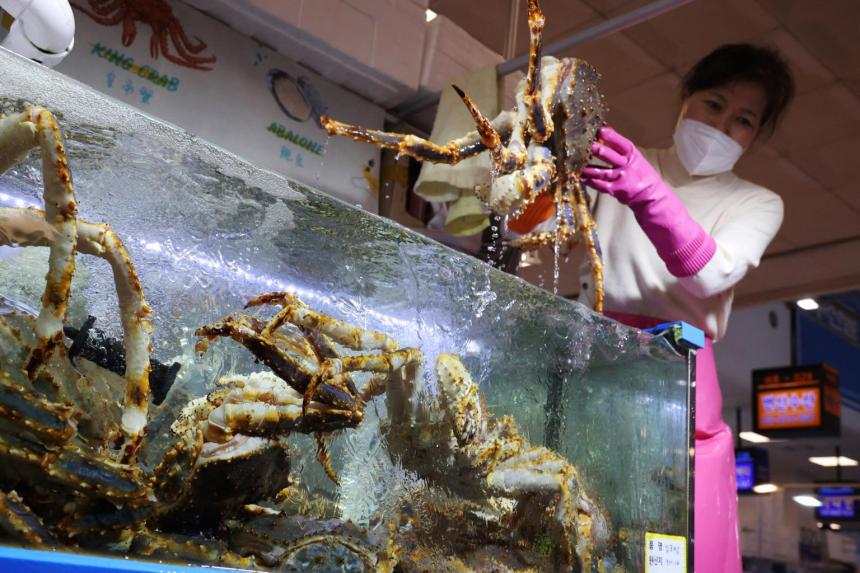 SEOUL (REUTERS) – Plunging prices for Russian crab have South Koreans flocking to seafood markets and restaurants but some consumers are questioning whether to boycott the imports on concerns the purchases indirectly support Russia’s invasion of Ukraine.

The dinner-plate sized king crabs from Russia, along with slightly smaller snow crabs and lobsters, were once a pricey delicacy in South Korea, though they have become more popular at supermarkets and online retailers in recent years.

But prices have nearly halved since late February as the United States, European Union and other nations banned Russian seafood imports over the Ukraine invasion, which Russia calls a “special operation”, and China’s lockdown on major cities over coronavirus outbreaks has further boosted shipments to South Korea.

Data from the Noryangjin Fisheries Wholesale Market, one of South Korea’s largest seafood markets, showed live Russian snow crabs prices fell to 23,000 won (S$25.60) per kg at the end of March from 50,000 won in mid-February, before rising slightly this week. The supply more than doubled during that period.

The market does not track king crab prices, but Kim Mi-kyeong, who has been running a fish store at Noryangjin for 10 years, said she sold them at 85,000 won per kg, down from 110,000 won two months ago.

“We didn’t have enough supplies back then, but a lot more volume has come in from Russia for the last two months. Prices are lower now, so twice as many people are coming,” she said.

Choi Myung-sook, 54, said she could not miss out on getting her favourite king crabs cheaply.

“I hope more Russian seafood will be brought in so that prices will go down even further,” she said.

But others say the government should join global efforts to ban Russian seafood, and that consumers should refrain from buying it.

Ukrainian President Volodymyr Zelensky, who is set to give a virtual speech to the South Korean parliament on Monday, has urged the international community to ditch Russian exports.

South Korea has curbed Russian coal imports and joined other economic and financial sanctions, but did not restrict food.

“We should not buy those crabs,” said Jung Mi-jung, 40, who said she was visiting the market for other items.

“That’s not even a necessity, and Russia waged an unjustifiable war against Ukraine. We should join the boycott.”