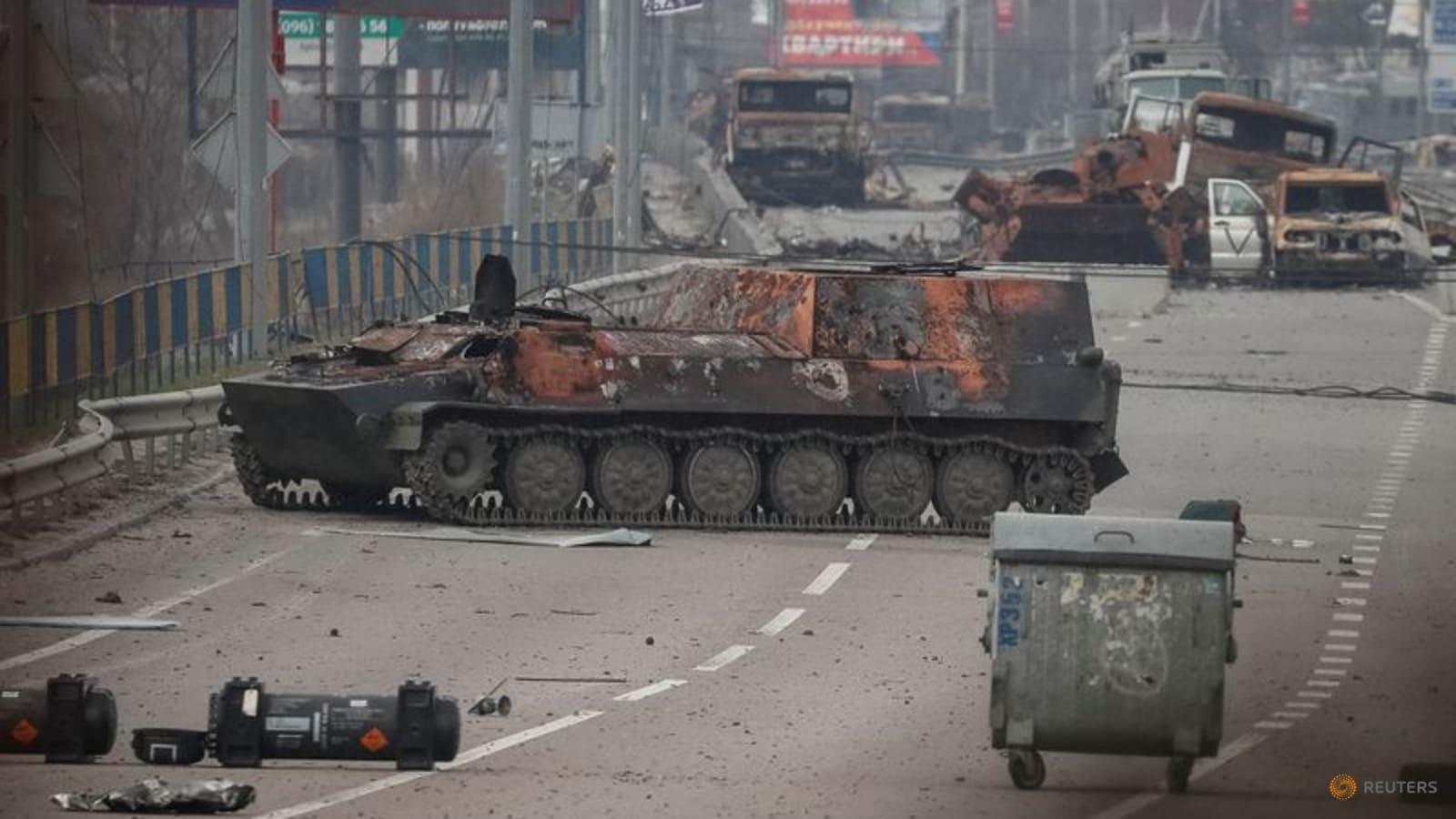 MALA ROHAN, Ukraine: Russian forces bombarded the outskirts of Kyiv and a besieged city in northern Ukraine on Wednesday (Mar 30), a day after promising to scale down operations there in what the West dismissed as a ploy to regroup by invaders suffering heavy losses.

Nearly five weeks into an invasion in which it has failed to capture any major cities, Russia had said on Tuesday it would curtail operations near Kyiv and the northern city of Chernihiv “to increase mutual trust” for peace talks.

“It’s not true,” Kyiv mayor Vitali Klitschko said in a video address to EU regional officials. “The whole night we listened to sirens, to rocket attacks and we listened to huge explosions east of Kyiv and north of Kyiv. There are immense battles there, people died, still die.”

Intensified bombardment could be heard in Kyiv on Wednesday morning from suburbs where Ukrainian forces have regained territory in recent days. The capital itself was not hit, but windows rattled from the relentless artillery on its outskirts.

Reuters journalists southeast of Irpin, a Kyiv suburb which has seen intense fighting for weeks, heard frequent shelling and ordnance exploding on the ground and in the air. Ukrainians evacuating spoke of heavy shelling north of Irpin, shells landing in Irpin itself and dead bodies in the streets.

Ukraine and Western leaders had cautioned that Moscow’s apparent peace gesture at Tuesday’s talks in Istanbul was a cover for reorganising forces that had failed to take Kyiv.

Russia’s defence ministry said on Wednesday its forces were regrouping near Kyiv and Chernihiv to focus on the “liberation” of the breakaway eastern Donbas region.

Chernihiv’s Mayor Vladyslav Astroshenko said Russian bombardment of that city had intensified over the past 24 hours, with more than 100,000 people trapped inside with just enough food and medical supplies to last about another week.

“This is yet another confirmation that Russia always lies,” he told CNN, adding that 25 civilians had been injured in a “colossal mortar attack” in the city centre.

Reuters could not verify the situation in Chernihiv. Russia’s defence ministry did not immediately reply to a request for comment.

Irpin itself was recaptured by Ukrainian forces this week. Reuters journalists who entered on Tuesday saw Ukrainian troops patrolling an abandoned ghost town of ruined buildings, with the body of an old man and a woman lying on the streets.

“Ukrainians are not naive people,” he said in an overnight address. “The only thing they can trust is a concrete result.”

Ukrainian Defence Ministry spokesman Oleksandr Motuzyanyk said Ukraine’s armed forces had observed some movements of Russian forces away from the Kyiv and Chernihiv regions but did not consider this to be a mass withdrawal by Moscow.

“It is preparing to resume offensive operations,” he said.

Around a quarter of Ukrainians have been driven from their homes by the biggest attack on a European country since World War II. The United Nations said on Wednesday that the number who have fled the country had risen above 4 million. More than half of those refugees are children and the rest mostly women.

Over the past week, Ukrainian forces have recaptured towns and villages on the outskirts of Kyiv, broken the siege of the eastern city of Sumy and pushed back Russian forces in the southwest.

In the village of Mala Rohan in the eastern Kharkiv region, two burned-out tanks with their turrets ripped off stood near damaged houses. Maksym, a Ukrainian soldier, said the Russians were being pushed back “slowly but steadily”.

“I think their morale dropped. Most of them already understood that they made a huge mistake when they came here. Therefore, I think they have no chance here, we will win.”

Russia says it is carrying out a “special operation” to disarm and “denazify” its neighbour. Western countries say Moscow’s invasion was entirely unprovoked.

The Donbas region, where Russia says it will now focus its efforts, includes Mariupol, where heavy fighting was again reported on Wednesday. The port city, which had a pre-war population of 400,000 people, has been laid waste after a month of Russian siege and the United Nations says thousands of people may have died.

Russian forces were shelling nearly all cities along the region’s frontline on Wednesday, said the governor of Donetsk, which is part of the Donbas.

Britain’s defence ministry said Moscow’s announcement about focusing on the Donbas was likely “a tacit admission that it is struggling to sustain more than one significant axis of advance”.

At Tuesday’s talks in Istanbul, Ukraine signalled it would accept neutral status, along with international guarantees to protect it from future attack. Its proposal also called for a ceasefire and would postpone discussion of Russia’s territorial demands.

Kremlin spokesman Dmitry Peskov said on Wednesday it was good to have the Ukrainian proposal in writing but there was no indication of a breakthrough.

Western sanctions have largely isolated Russia from world trade but Moscow is still the biggest supplier of oil and gas to Europe. Facing a sharp decline in its currency, Moscow has told Western buyers they will have to pay with roubles, something Western countries say breaks their contracts.

Germany, Russia’s biggest gas customer, declared an “early warning” on Wednesday of a possible emergency if Russia were to cut off supplies.