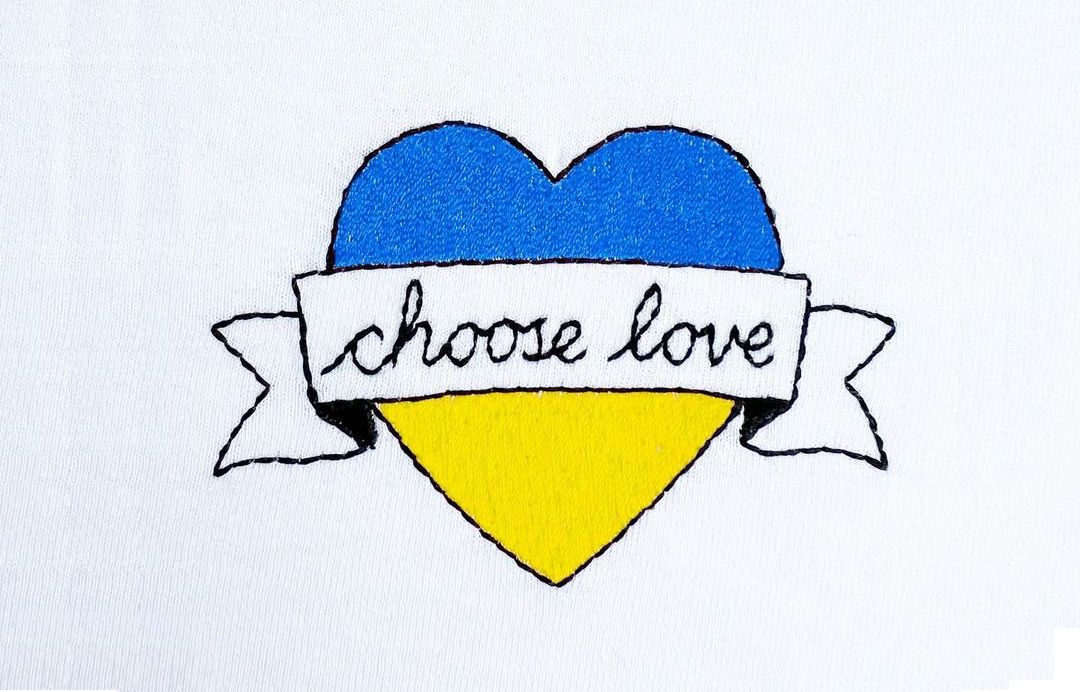 The crisis in Ukraine has made some of the world’s most famous fashion brands do their bit to support the innocent people of the eastern European country, who have been pushed into a war by a belligerent neighbour.

Russian President Vladimir Putin invaded Ukraine on 24 February 2022, single-handedly unleashing a catastrophe on Europe that has not been seen since World War II.

As each day passes in a war that could have been averted, the resilience of the Ukrainian people, while facing a ruthless enemy that is much larger in size, is indeed inspiring.

At the same time, it is heartbreaking to see innocent Ukrainians fleeing their homes and simply trying to stay alive as Russian forces continue bombarding Ukrainian cities and towns. The long queues of refugees at the western border of Ukraine with countries such as Poland and Romania, is a testimony to the devastation created by Putin.

Support for the people of Ukraine from global fashion brands

Most of the world has come together to support the people of Ukraine led by the country’s heroic leader, President Volodymyr Zelensky.

On an geopolitical level, a wave of sanctions on Russia, diplomatic support against Russia from European nations renowned for their historic neutrality and military aid from pacifist countries are just some of the many ways nations have banded together behind Ukraine.

Several prominent humanitarian organisations are raising funds to help the refugees, most especially children, women and the elderly — those who are the worst affected in any conflict. These include the International Committee of the Red Cross, the International Medical Corps and the UNHCR, the UN Refugee Agency who are helping the people of Ukraine on ground.

Global luxury fashion brands have also volunteered.to help. Realising their  undeniable responsibility to support the rights of the people of Ukraine, several major brands and independent labels have announced their intent to donate towards the Ukrainian cause.

Kering, the French luxury group which owns brands such as Alexander McQueen, Balenciaga, and Gucci among others, announced on 2 March that it is making a ‘significant donation’ to support the displaced refugees of Ukraine.

“In order to contribute to humanitarian efforts to bring aid and support to Ukrainian refugees, Kering will make a significant donation to the UNHCR, the United Nations Refugees Agency. We hope for a peaceful resolution of this conflict,” the company announced on Instagram in a post with an image spelling the word ‘Peace’ in the colours of the Ukrainian flag.

Kering’s brands are themselves making significant contributions to the humanitarian effort.

While Gucci donated US$500,000 to the UNHCR through its Chime for Change initiative, Balenciaga contributed to the The World Food Programme (WFP). The Spanish-origin, Paris-based luxury label removed all its posts on its official Instagram handle and put up just one — the Ukrainian flag .

“We stand for peace and donated to WFP to support first humanitarian help for Ukrainian refugees. We will open our platforms in the next few days to report and relay the information around the situation in Ukraine,” reads the only post  by Balenciaga.

The brand is also encouraging its over 12 million followers to donate to WFP via the link in their bio.

Like Kering, Only The Brave Foundation, the non-profit arm of fashion conglomerate OTB group, is also helping the people of Ukraine.

The non-profit organisation announced on its official Instagram page that it will donate “first direct economic support to families on the run to help them cope with the most urgent needs.”

The group is extending its support to the UNHCR to help over  600,000 Ukrainians who have crossed the borders into the safety of neighbouring countries and others who have been displaced.

A post shared by Only The Brave Foundation (@otbfoundation)

Several independent fashion brands from across Europe and beyond have also extended their help to the people of Ukraine.

Among them is German footwear brand Aeydē. Based in Berlin, the company announced that it will donate 30 percent of its net proceeds from the previous weekend to Aktion Deutschland Hilft — a network of 20 organisations helping the people of Ukraine.

On 2 March, New York-based clothing brand Collina Strada said that it will donate all of its sales over the week to the charity United Help Ukraine, which helps the people with essential medical supplies.

London-based designer Cressida Jamieson is selling T-shirts specially created with a ‘Choose Love’ heart in Ukrainian colours to support the people of Ukraine. Jamieson has said that all profits will go to charity.

“With your donations, @chooselove will be supporting projects (that meet their criteria) who are providing vital aid and services to those still in and fleeing the country, including: emergency medical care, food, shelter, clothes, legal support, support for the LGBTQIA+ community and mental health support,” reads the announcement on Instagram.

UK-based Cawley Studio is raising money for Ukraine by raffling Ella vest. In a post on 2 March, the brand said that it has raised £4,500 (US$6,300) for the British Red Cross – Ukraine Crisis Appeal. The brand says that each entry is £10 and entries can be made multiple times.

Heliot Emil, the Danish menswear label, is donating 100 percent of its pre-order profits from its AW22 collection to humanitarian aid for Ukraine via UNICEF. Its AW22 collection will be showcased at the Paris Fashion Week on 3 March, 2022.

Fred Rigby Studio, the furniture maker from London, will be donating 10 percent of all of its Raindrop sale profits of the month to the British Red Cross for its Ukraine fundraiser. Raindrop is the collection of coffee tables and side tables made by Rigby Studio.

Chylak is a bag maker from Warsaw, Poland. As we know, Poland shares a border with Ukraine and has been actively taking in large numbers of refugees fleeing the devastation.

Chylak has donated all of its profits over the weekend to various Polish charities supporting the refugees including Polish Humanitarian Action, Polish Center For International Aid, Rescue Foundation and UNICEF. The brand was able to donate €10,000 (US$11,100).

“The money will be used to bring humanitarian aid to Ukraine and support refugees looking for shelter in Poland,” Chylak said in an Instagram post on 1 March.

Paris-based brand Elleme has set aside some of its products to raise funds for the Ukrainian cause. The brand says that 100 percent of the proceeds from the sales of the products will go to humanitarian relief for Ukraine through UNICEF.

“Let’s unite together to help those affected by this war. We can relate to everyone feeling helpless watching this tragedy unfold. However, we can join force and make a contribution together for those that can, or just pass the message to create more awareness in hope to stop this war. Any amount can make a difference!” reads the message on their Instagram post, which carries a picture of a young girl standing inside a destroyed building.

In a post on its Instagram, Les Fleurs Studio, an upcycling brand based in Madrid, Spain, announced that it is donating proceeds of its sales during a week to the non-profit Razom for Ukraine, which supports democracy and progress for the country. The social media pages of Razom for Ukraine have been relentlessly demanding a no fly zone over Ukraine, urging people around the world to back the Ukrainians and sharing stories of both the brutal Russian attacks on the Ukrainian soil and the people’s courageous resistance to the same.

Numerous independent brands have come together for an online auction to be held from 5 March to 6 March by tableware maker By Alice to help people in the Ukrainian crisis. The brands include Matilda Goad, Straw, Polkra, and Hesper Fox. Up to 100 lots will be available for auction and all of the funds will go to ‘Choose Love’ for their Ukraine Crisis Fundraiser.

Albie & Pearl is a vintage homeware brand which announced on 2 March that it will donate 15 percent of the sales from the upcoming weekend to ‘Choose Love’ to bolster their work in the Ukraine crisis.

The post Fashion brands are helping with the crisis in Ukraine. Here’s how appeared first on Lifestyle Asia Singapore.