The world is still fascinated with Squid Game. But come mid-November, audiences could have a new K-drama series to fuss about. Directed by Yeon Sang-ho, Hellbound offers a supernatural take where angels and demons roam.

Hellbound is the newest Korean series from the world’s leading streaming entertainment service. It explores a world swept by a supernatural phenomenon where executors from Hell appear condemning people to Hell.  Following this, a new religious group called the New Truth emerges amidst this chaos, while others try to uncover the truth behind the series of events. 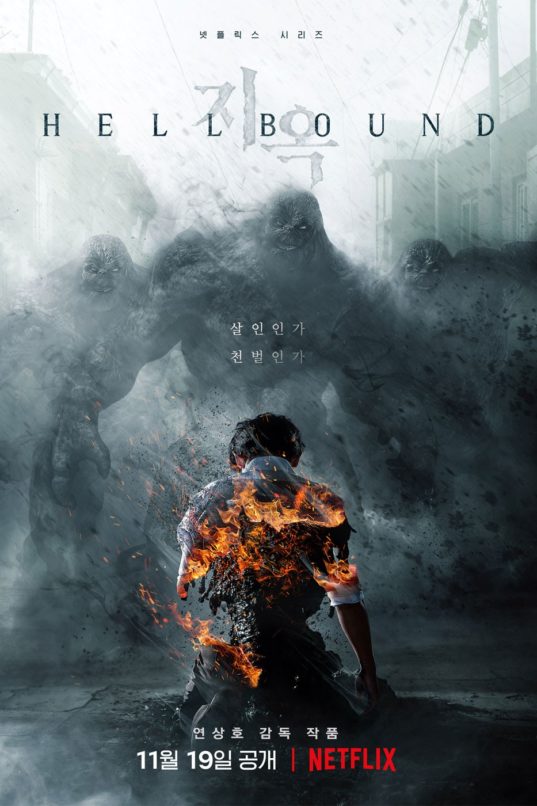 This new dystopian world is being created by Director Yeon. It is based on the webtoon titled ‘The Hellbound’, critically acclaimed as ‘the most shocking piece of work in the history of webtoons.’

“From the time when I was working on the webtoon, bringing the story onto the screen was always at the back of my mind,” says Yeon Sang-ho. The director who created the original webtoon with Choi Gyu-seok, author and illustrator of Songgot, teamed up with Choi again to flesh out the world of Hellbound. Through the supernatural phenomenon where “executors” from Hell land in the middle of Seoul to demonstrate condemnation to Hell, the filmmaker reveals human weaknesses and fears and provides a sharp portrayal of a variety of people in the midst of the chaos.

From Seoul Station to Train to Busan, Peninsula, and The Cursed: Dead Man’s Prey, Sang-ho has made social commentary through his portrayal of imperfections and diverse aspects of people who are faced with insurmountable disasters or supernatural phenomena. With Hellbound, he once again poses the sharp question of “What kind of world do we live in? And how should we, as humanity, live?”

Ramping up anticipation is this gripping teaser below. Hellbound premieres exclusively on Netflix on 19 November 2021. Watch the trailer below: