Where Myanmar Sends Its Political Prisoners

The prison was already packed, its population more than double its 5,000-person capacity. Recent prisoners include two American journalists and an Australian economic adviser. Hundreds of pro-democracy protesters have also been crammed in, some with fresh gunshot wounds.

For 134 years, Insein Prison has stood as a monument to brutality and authoritarian rule in Myanmar. Built by British colonizers to help subjugate the population, the pizza-shaped penitentiary became infamous for its harsh conditions and the torture of prisoners during a half-century of military dictatorship.

Now, with the Myanmar military back in control after a Feb. 1 coup, the aging prison has become a central part of the continuing crackdown against the pro-democracy movement in the Southeast Asian nation. The junta has detained more than 4,300 people since February, according to a rights group. The primary destination has been Insein, the most prominent of 56 penitentiaries.

In interviews with The New York Times, a retired Insein prison guard and 10 former prisoners painted a portrait of appalling conditions and human misery at the notorious institution. Many say they fear that a new generation of political prisoners will be forced to endure the same horrific treatment if the military is allowed to remain in charge.

“There are more political prisoners now than decades ago,” said U Bo Kyi, who co-founded the Assistance Association for Political Prisoners, an advocacy group, and who served two stints at Insein the 1990s. “If we cannot remove the military and restore democracy, these political prisoners will suffer like I did.”

During the first period of military rule, from 1962 to 2011, the penal system often held thousands of political prisoners at a time. At Insein, they were usually kept in cells with primitive sewage disposal and only thin blankets and a hard surface to sleep on. They received meager, barely edible rations, with tendon and bone as a substitute for meat, and rice adulterated with sand and small stones.

Former political prisoners from that era say they were frequently beaten and sometimes burned, given electric shocks, forced to crawl across jagged rocks and locked in kennels intended for dogs. Interrogators would put salt in a prisoner’s wound or hold a plastic bag over his head until he passed out.

The powerful military intelligence branch once kept an interrogation center at Insein, summoning prisoners day or night for torture sessions. The prisoners would be placed in leg irons and beaten, “sometimes to the point of unconsciousness,” Amnesty International reported in 1995.

Daw Aung San Suu Kyi, Myanmar’s de facto civilian leader who was detained in the coup, spent time at Insein in 2003 and 2009. U Win Tin, a journalist and the co-founder of Ms. Aung San Suu Kyi’s National League Democracy party, was there for 19 years before he was released in 2008. (He died in 2014.) Both were imprisoned for their opposition to military rule.

But even during the five years when Ms. Aung San Suu Kyi headed Myanmar’s civilian government in a power-sharing agreement with the generals, hundreds of political prisoners were locked up at Insein for offending the military or the government. Two Reuters reporters who uncovered a massacre of Rohingya Muslims in Rakhine State were held there for more than 16 months.

Today, more journalists are finding themselves behind those same prison walls.

In March, the authorities arrested Nathan Maung, an American citizen, and Hanthar Nyein, co-founders of the online news site Kamayut Media. Before arriving at Insein, they were held for weeks at a nearby interrogation center and severely beaten, burned and forced to kneel on ice with their hands cuffed behind them, The Committee to Protect Journalists said. They are accused of undermining the military. 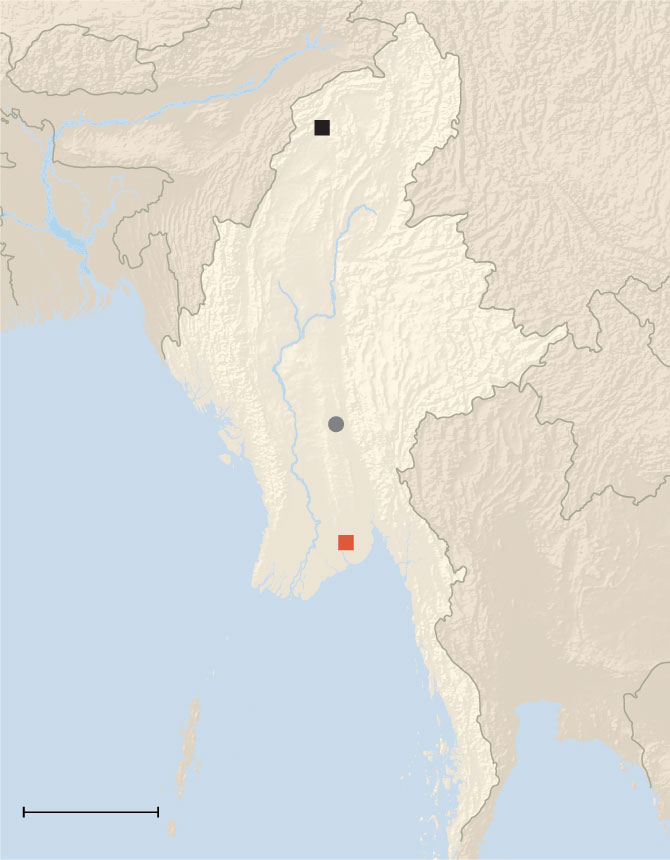 Another American journalist, Danny Fenster, the managing editor of Frontier Myanmar, was arrested on Monday at the Yangon airport as he prepared to leave the country and was taken to the prison, the publication said. His wife said Friday that she was awaiting permission to see him.

On Friday, the State Department said it was “deeply concerned” by the detention of the two American journalists and called on the regime to free them. Consular officials have not been allowed to see Mr. Fenster.

“The detention of Daniel and Nathan, as well as arrest and use of violence by the Burmese military against other journalists, constitutes an unacceptable attack on freedom of expression in Burma,” the State Department said, using Myanmar’s former name.

Yuki Kitazumi, a Japanese journalist who was accused of spreading false news, was held there before being deported in May. Others now at the prison include Thura Aung Ko, the ousted minister of religious affairs and culture, and Sean Turnell, an Australian who was Ms. Aung San Suu Kyi’s economic adviser.

When Ms. Aung San Suu Kyi headed the civilian government, conditions at the prison gradually improved. Inmates were allowed to watch television and have books. The International Committee of the Red Cross built a new family visit facility. But the situation has rapidly deteriorated.

After the coup, prisoners were barred from going outdoors or watching television, except for channels controlled by the regime. Visits by family members have been cut back and communication with the outside world restricted. Often, family members searching for arrested relatives learn whether they are being held at the facility by taking food for them and seeing if the prison accepts it.

Military courts are once again convening inside the prison and handing down harsh sentences.

“The conditions now are similar to the conditions before 2010,” said U Swe Win, co-founder and editor of the news outlet Myanmar NOW. Mr. Swe Win served seven years at Insein and other prisons for distributing pamphlets and participating in a protest as a student.

For many recent prisoners, sometimes the first stop is the infirmary to be treated for wounds. The satirical slam poet U Paing Ye Thu was sent to Insein in 2019 for mocking the generals. He was serving a six-year sentence when the military staged its February coup. Conditions worsened overnight, he said.

High-profile detainees soon arrived, including ousted government officials. He saw about three dozen injured protesters, including some who had been shot, waiting for medical treatment.

“I was shocked,” Mr. Paing Ye Thu, a leader of the Peacock Generation Thangyat troupe, said after his release under a general amnesty in April. “I didn’t expect that so many people with gunshot wounds would be arrested and sent directly to prison.”

The prison was built on the outskirts of Yangon, Myanmar’s largest city, and currently holds about 13,000 inmates, most of them convicted criminals. Female prisoners are held in a separate building.

A former guard, U Khin Maung Myint, who worked for 25 years at various prisons, including Insein in 1986 and 1987, said political prisoners were often tortured for minor infractions.

“If a piece of newspaper was found inside the cell, they tortured the prisoner and they fired the prison staff,” he recalled.

One goal of the penal system is to break the spirit of the inmates, said Mr. Bo Kyi, the co-founder of the rights group for political prisoners. Some ex-prisoners have suffered lifelong trauma as a result, he said. Helping them is one aim of the organization, which has painstakingly tracked killings and arrests since the coup.

“When you are a political prisoner, you do not have basic human rights, even basic prison rights,” he said.

Those are circumstances U Gambira would rather forget. A leader of the 2007 monk-led protests movement sometimes called the Saffron Revolution, Mr. Gambira spent more than six years behind bars, including time at Insein, where he said he was forced to watch as his friends and brother were kicked and beaten by guards.

“They punched and kicked them with military boots in front of me,” said the former monk, who now lives in Australia. “My brother lost two front teeth.”

While Insein’s grisly history has made it Myanmar’s prominent penitentiary, Mr. Gambira said the country’s entire penal system is overrun with horror stories.

For four straight months at remote Khamti Prison, he said, a metal bar was chained to his legs and his hands were cuffed behind his back, causing constant pain and making it difficult even to relieve himself. When he asked for his rights as a prisoner, he was injected with a liquid that caused excruciating pain and made his body shake uncontrollably until he was given an antidote, he said.

After his release, he was diagnosed with post-traumatic stress disorder.

“All the prisons in Myanmar,” he said, “are a man-made hell on earth.”