Undoubtedly one of Africa’s most spectacular wildlife experiences, the Great Wildebeest Migration in East Africa sees over 1.3 million wildebeest, zebra and antelope driven by instinct to follow the rains across the plains of the Serengeti in Tanzania and the Maasai Mara in Kenya. This Greater Mara-Serengeti Ecosystem has been classified among the “Seven Wonders of the World” precisely due to this extraordinary annual migration, which is one of them most famous and well-documented animal migrations in the world, let alone Africa.

While particular wildlife sightings can never be guaranteed on safari, the sheer scale of this migration makes it almost impossible to miss out completely. The game animals preoccupy themselves with grazing on the plains and drinking from watering holes. They travel some 2600 square kilometers across the two countries, facing often fatal challenges in the form of predators, both on land and in the rivers, as well as exhaustion, thirst and starvation.

As you will find out in this loose monthly guideline, depending on the time of year you travel, you may witness the joy of calving season, the majesty of a mile-long column of wildebeest on their long march, or the cut-throat drama of a river crossing.

As parts of the Serengeti plains begin to dry out, the herds begin moving out in search of fresh grazing and water further north. A vast sea of brown wildebeest extends as far as the eye can see and is broken up only by groups of monochromatic zebra and small, lithe antelope. At this point, the moving columns snake around the areas of Moru Kopjes and west of Seronera. Upon reaching the south side of the Grumeti River, which runs along the western corridor of the Serengeti National Park, the wildebeest are often forced to stop, being held up here (generally around June) due to a network of water channels slowing their migration north. 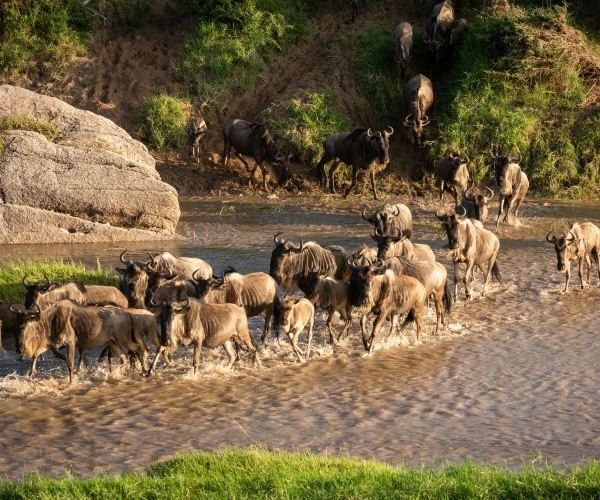 This congregation in the Western Corridor grows larger as more and more wildebeest arrive and it is one of the river crossings where a huge density of animals are forced to make the brave dash across to the other side of the river bank. While the Grumeti crocodiles do enjoy quite a feast at this point of the migration, because it is a series of pools and channels rather than a continuous running river, this crossing isn’t quite as big a feast as those further north at the Mara River.

Over July and August, the wildebeest and their fellow travellers continue moving northwards, often taking different courses, such as across the Grumeti Reserve and Ikorongo or through the heart of the Serengeti National Park. Many safari enthusiasts consider this the best time to encounter the Great Wildebeest Migration because the potential for excellent predator action increases over this time. The herds move into Kenya, where predators lurk in the shallows of the Mara River and on the grassy plains of the Masai Mara Triangle, waiting to catch their next meal. 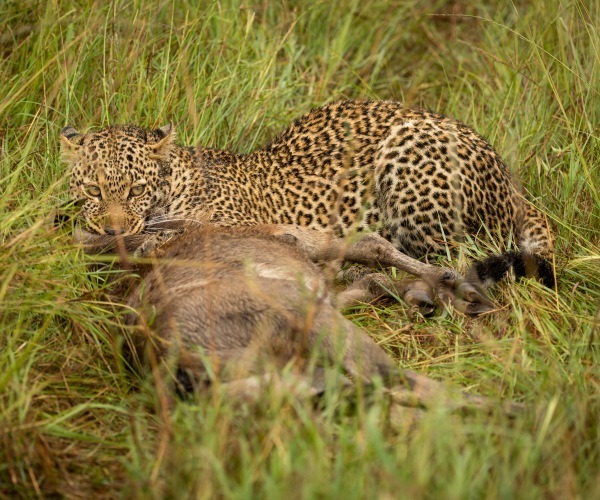 Perhaps the single greatest challenge that the wildebeest face every year is the Mara River, which they generally arrive at in September. The river rushes into the northern Serengeti from Kenya’s neighbouring Maasai Mara Game Reserve and creates a life-threatening obstacle for the animals, with great panic and confusion from the herds as they take the plunge.

As the wildebeest bound down the banks of the river, the weak can be crushed in the stampede and those crossing the river slowly may get caught and drowned by crocodiles. This mass movement of game attracts big cats like lion and leopard, who stalk them through the long grasses before chasing down those on the fringes of the group that are most vulnerable.

The wildebeest herds all begin migrating towards southern Serengeti. Over this period, they generally move together along the same route – through western Loliondo and the Lobo area of the Serengeti National Park. As the warmer summer months approach, the seasonal short rains begin in November, which means the herds of wildebeest and zebra will arrive to a playground of luscious short-grass thriving on the Serengeti plains in late November and December.

Having followed the rains back down into the southern parts of Serengeti, the plains game animals are ready to begin the year’s calving season. About half a million calves are born during a four to six-week period in February, and the youngsters need to be up and walking 10 minutes after being born if they are to survive. Endurance is not only needed to make the journey but also to outrun the land predators that target the weaker and more vulnerable young.

The wildebeest prefer to remain for as long as possible on the southern plains of the Serengeti, but the inevitable shortage of grass and water from May to October drives them north. Over March and April, they slowly spread west across the plains before the start the trek up north again in May. This is also the time at when the ‘Serengeti Rut’ occurs, which sees 250 000 wildebeest bulls mating with 750 000 cows. 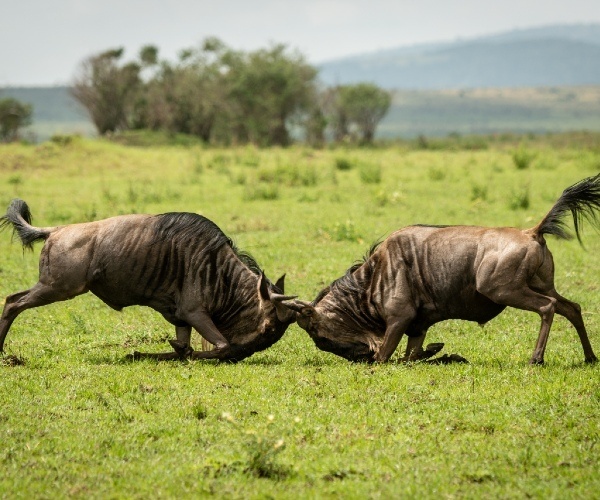 A migration safari should be planned at least a year or more ahead so that you are in the right camp at the right time for what part of this incredible wildlife spectacle you want to witness! It is always good to remember that on any safari, patience is a most certainly a virtue. And if you don’t get to see exactly what you had hoped to, this magical part of Africa always has something to offer the discerning visitor.

Calvin Cottar is Director and Owner at Cottar’s 1920s Safaris. Cottar’s 1920s Safaris is an award-winning luxury 1920s safari camp and private bush villa located in the famous ‘seventh’ natural wonder of the world, the Maasai Mara in Kenya, and owned and managed by the oldest established and continuing safari family in Africa.