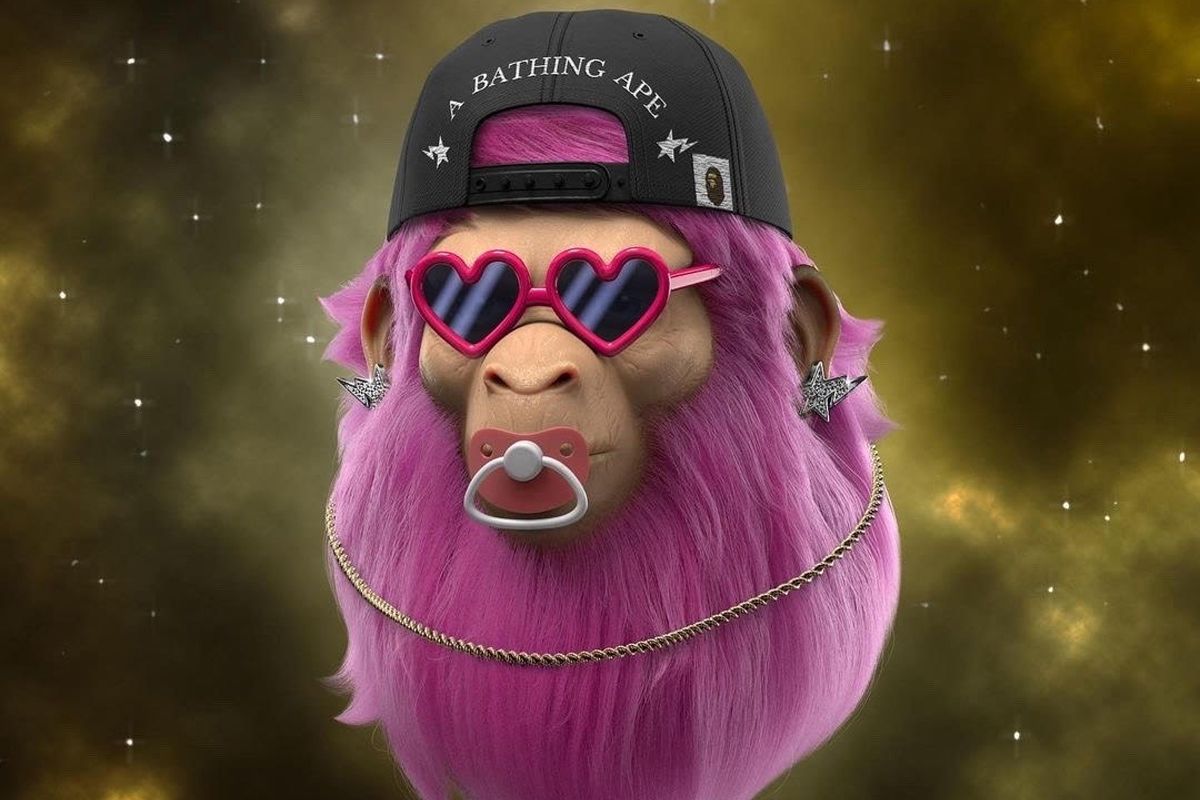 After announcing the (B)APETAVERSE launch in January, BAPE proved that it wasn’t monkeying around by debuting its first NFT — fans are going bananas.

The dedicated (B)APETAVERSE Instagram page uploaded a sneak peek from its upcoming 10,000-stacked NFT series on February 18, saying, “THIS ONE IS ESPECIALLY FOR BAPE LOVERS.”

I don’t know about this one, BAPE. The floating ape head sports pink fur with A BATHING APE snapback, Lolita-style heart-shaped sunglasses, STA stud earrings, and a ready-to-slip-away chain necklace (what kind of sorcery is keeping the necklace up?).

The hyperrealistic pink ape’s pink pacifier is perhaps a nod to grown-up Baby Milo preparing for the new age (where pacifiers are cool on matured apes, I guess) but it also gives off a weird vibe as a complete design.

One of the (B)APETAVERSE’s many hashtags is #WorldGoneMad, a reference to a classic BAPE slogan. I think the “world” aspect ought to be replaced with “BAPE” after viewing this binky-toting NFT and fans seem to agree.

“Make it stop” and “really cringe move for BAPE tbh” sum up a majority of reactions toward the Japanese streetwear brand’s first digital collectible. Even the most loyal BAPE lovers apparently can’t take this creation seriously.

The mood is pretty much the same on another image of a very detailed ape face, though there are a host of enthusiastic fire emojis and people clamoring for a chance to pay up.

“This not it,” one helpful fan said. “I think you guys should go more anime cartoony instead of realism. Love your brand tho.”

It’s a good point: BAPE’s famous logo is a clever 2D ape head design, instantly recognizable and still pretty appealing to this day. Seems odd that the brand instead opted for strikingly realistic monkey faces instead.

Commenters on a curatorial page’s early look at other NFT designs were similarly bemused.

With semi-successful NFT projects like HAPEBEAST already on the market, one has to wonder if there’s any room for BAPE’s digital dabbling.

Still, given the amount of positive comments, it seems like the (B)APETAVERSE is basically free money for BAPE, regardless of the reception outside of the NFT realm. So it goes for most of these projects, really.