What to eat on on the Umbria-Tuscany border: Cheese, salami, prosciutto, fish, truffles and more 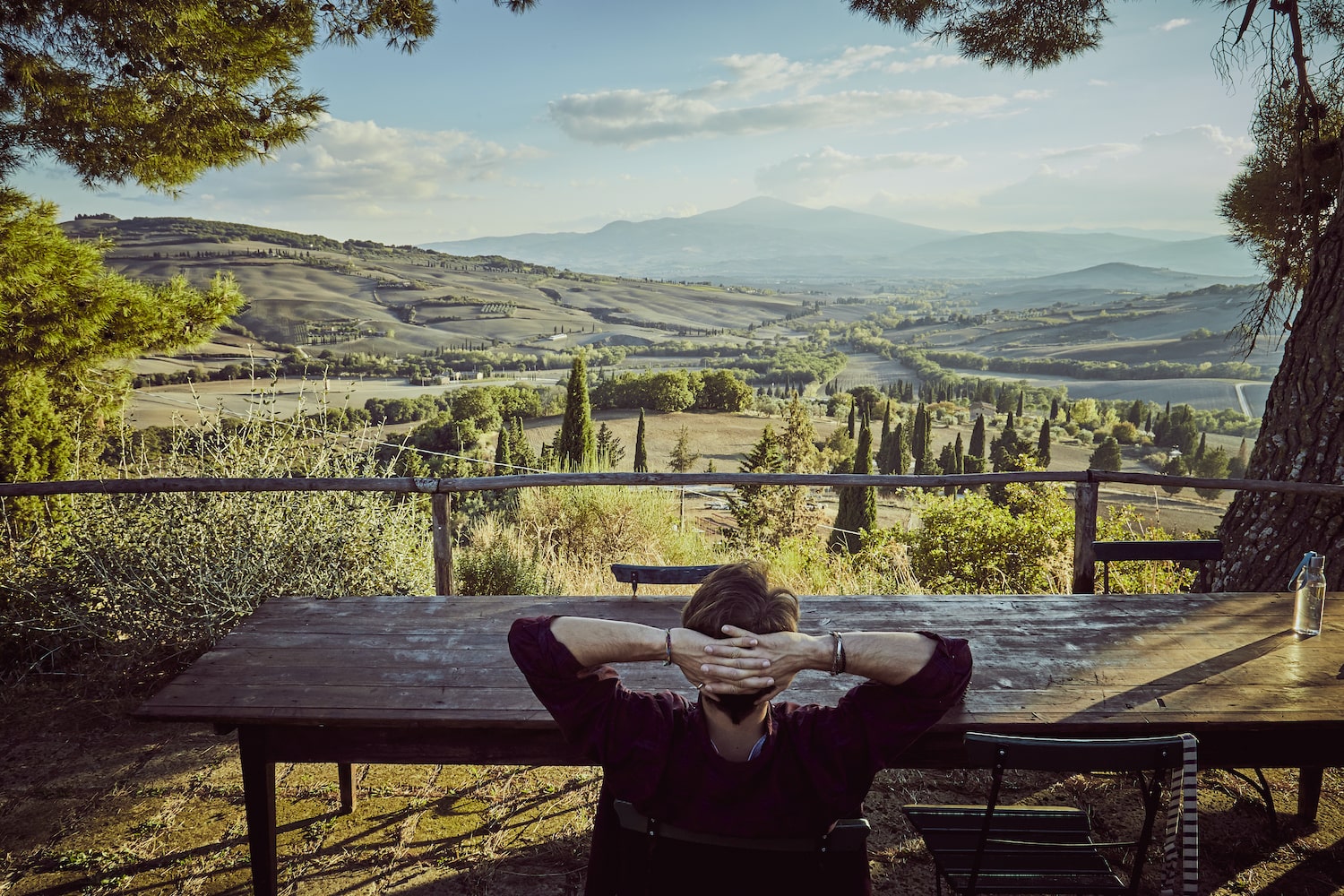 Along the border of Umbria and Tuscany, a slow road of gourmet delights winds languidly back and forth. Debbie Oakes travels this fertile landscape to meet the makers, growers and kitchen maestros who best represent the culinary bounty of this region.

In the part of Italy where southern Tuscany ambles into Umbria, its rolling-green neighbour, the road leads one through glimmering olive groves to shimmering lakes that teem with fish. Up and down it goes, over verdant hills dotted with flocks of sheep, past medieval villages to ancient ruins bathing like grapes in the sun. Eight thousand years ago, the mysterious Etruscans first groomed and farmed these fertile lands, and foodies across the millennia have been rewarded with an abundance of seasonal flavours ever since.

Pienza, in the Tuscan heartlands, is a town rebuilt in the glory days of the Renaissance by Pope Pius II. His far-sighted urban planning left behind a Unesco-protected time capsule of palaces, churches and piazzas that has, more recently, become Italy’s capital of pecorino cheese.

Podere il Casale, near Pienza, is an organic farm with one of Tuscany’s best-kept secrets: a farm-to-table restaurant where the eye-stretching views compete for attention with the food. Below us lies a landscape pasted straight from Botticelli’s dripping brush, while in front of us sits a delicious selection of pecorino (sheep’s milk) cheeses and homemade chutneys.

“Depending on how long the cheese has been aged, and even the area of the room it has been aged in, the flavour and texture change,” explains Ulisse Brändli, owner and self-proclaimed shepherd. “Matured cheese, called stagionato, is harder, crumbly and has a nutty flavour. Meanwhile, semi-stagionato is softer and milder. But even fresco, the mildest pecorino of all, is stronger in flavour than cow’s-milk cheese.”

For a city slicker (like me) it is a soulful (and stomach-full) experience to be eating food lovingly raised, grown and made where I sit. After a lunch bathed in sunlight and the smell of summer lavender, Ulisse leads me to the caseificio, or dairy, where cheeses line up like well-fed soldiers to be carefully aged: fat ones, tall ones, white ones, small ones, some coated in ash, others wrapped in walnut leaves, cheeses with blue mould and, my own personal favourite, the “drunken pecorino”, coated in grape skin left over from winemaking.

Until we can travel again – and you can visit this magical part of the world yourself – you can travel here via their recently released cookbook, available at cookbook-podereilcasale.com.

Pork, in all its culinary incarnations, has long been a staple of Umbria and Tuscany. It is said that here, no part of the pig is wasted.

I am with local travel designer Lucia Noritto, who has brought me to an organic farm in Chianciano, Tuscany. Here we meet a sounder of friendly Cinta Senese, an indigenous breed of swine – first raised by the Etruscans – that teetered on the brink of extinction for many years, as farmers focused on more profitable UK pigs. In 2012, however, they were finally recognised as a “niche product of exceptional quality”. The breed was saved and designated a Protected Designation of Origin (PDO) status.

“Cinta Senese meat tastes of the woods because they eat only acorns, hazelnuts and chestnuts,” Lucia tells me. “The meat is not overly fatty, but tender and juicy, because they use their muscles and don’t just stand in a stall and develop fat. The Spanish have Pata Negra jamon and we have Cinta Senese prosciutto.”

The meat is traditionally cured – according to the cut – to become finocchiona, a Tuscan salami made with wild fennel, black pepper, garlic and red wine. The cheeks, meanwhile, become prized guanciale, capocollo and rigatino, while the belly is spit-roasted for eight hours for porchetta, the region’s most famous succulent sandwich ingredient.

Heading northeast we arrive at Italy’s third largest lake. In the middle of land-locked Umbria, Trasimeno boasts clear waters, sandy beaches and fresh fish. On the shores, bronzing Italians do la dolce vita under sun umbrellas, while sipping Aperol between rounds of volleyball and a swim. In the waters, perch, pike, carp, tench and eel thrive. Over steaming plates of fresh fish, renowned local chef Francesco Falciani tells me: “When the produce is fresh, the flavours speak their own language. And the simplicity of our dishes is the best way to highlight the natural taste of quality ingredients.”

A community of fishermen known as “the Co-op” use sustainable net-fishing techniques to catch the lake’s bounty. They can also arrange sunrise excursions along the coast to find hidden spots to swim, fish and enjoy gorgeous views. Cooking classes can also be arranged to learn the traditional recipes of Lake Trasimeno, such as “peasant bouillabaisse” stews like tegamaccio, a delicious combination of freshwater fish, tomato sauce, garlic, celery and local white wine.

In the small village of Pettino, located in Umbria’s wild Apennine mountains, visitors are transported about 200 years back in time. Old stone buildings and small piazzas nestle into the mountainside as if for protection, and locals tend the land in the ways of their ancestors; growing farro and lentils, raising sheep, cattle and goats, and gathering porcini mushrooms and truffles in the centuries-old beechwood forests that are rich with diverse ecosystems and wildlife.

It’s a typical endless-blue-sky September morning when I meet Mac, of Wild Foods Italy. His Lagotto Romagnolo truffle dogs – Picchio, Vespa and Macchia – jump and bark excitedly as we head into the forest to find the treasured tubers. What follows is not only an experience of the frisky flavour of freshly dug truffle (once banned by the Catholic church for their sexy aphrodisiac qualities), but also a deep healing bath in Europe’s oldest woods. Dark green forest air, thick in oxygen, fills my lungs, while views over the mountains stretch out endlessly.

“My wife Francesca Chiacchiarini’s family have owned these lands since 1486,” Mac tells me, “and they have been hunting truffles since then.” Soon enough Picchio barks and Macchia yelps, as Vespa has unearthed a truffle! In the distance, Dan Lithgow, the Kiwi shepherd, looks up from his sheep, smiles knowingly and waves. Later, it’s back to the homestead where Francesca and her nonna champion the fresh pasta and homemade cheese as we all sit down for a fresh “everyday gourmet” lunch with lashings of Umbrian wine. It all has to be experienced to be believed.

The ingredient that brings all of these gourmet delights together is Extra Virgin Olive Oil (EVOO), internationally renowned for low acidity, richness, and a variety of fragrances and flavour. For Amanda Forman Simonelli, who stands with me in her olive grove, the dappled sunlight dancing in her blond Oklahoman hair, Umbria was a case of love at first sight.

“I love the landscape,” she says. “It’s one of the most forested regions of Italy, full of rolling hills and mountains. The air is clean and groomed cylindrical olive trees dot the landscape. The sunsets feel like a living painting.”

Amanda, who co-founded Olivando EVOO with husband Marco, explains that Umbria’s mountainous landscape and soil of rocky clay have made it difficult, historically, for extensive agriculture to develop. But it’s exactly this unforgiving terrain, coupled with Umbria’s extreme changes in weather conditions from summer to autumn, that accounts for the aroma, intensity and complexity of the olive oil.

“During the fruiting phase the olive trees go into stress mode. The plants build up phenols that protect the fruit’s oil from degradation. Other Italian EVOOs are often described as ‘delicate, with notes of almond or ripe tomato’, but Umbrian EVOO is characterised by sensations of bitterness and spice. Can we call it the best? I’d love to hear that conversation play out at a mixed region dinner table!” she adds with a laugh.

Viticulture on the Umbria-Tuscany border traces its historical roots back to the Etruscans and the Romans. To the west are the big Tuscan Vino Nobiles of Montepulciano, while to the east you’ll find Umbria’s most celebrated red, Montefalco Sagrantino. In the middle, the wine road of Trasimeno boasts delicious wines you will not know unless you know. Vineyards on these hills are on prime vine-growing land, and the lake creates a mild-winter-long-hot-summer microclimate that the plants just love.

Surrounded by grapes ripening greedily in the sun, I find myself near Città Della Pieve chatting with Paolo Bolla, scion of the famous Bolla family, whose long heritage of winemaking in Verona includes the first Amarone in 1953. Paolo fell in love with “the light and the landscape” of Umbria, which is why, in 2001, he moved with his family to set up Fontesecca, an organic vineyard.

“We started with one hectare, planted in 1973 by the previous owner, Giovanni Parbuono, and expanded on that,” he explains. “For us it was important to be organic. We are doing our best to safeguard and respect our little piece of the world. It is challenging, but inspiring.

“The grapes I use have adapted over hundreds of years to this region. They express themselves here better than other grapes. The terroir is hilly with sandy and clay soils. The soil has shell fossils, the remains of a long-ago sea. This gives the wines a good minerality, while exposure to the sun gives them strength and depth.”

Paolo goes on to say that agricultural techniques in Umbria and Tuscany differ from the New World because most of the farms are small and artisanal. “The work is the opposite of industrial agriculture. There is a lot of manual labour and a focus on natural techniques. We are close to Montepulciano, but at the same time, quite different. Apart from the Sangiovese we have vines that they do not often use, such as Ciliegiolo, Canaiolo, Trebbiano Toscano and Grechetto. And they are perfect with all combinations of local cuisine. The reds go especially well with meat, cheese and salami. The whites and rosés with the fish, pasta dishes and appetisers.”

Meanwhile, just down the strada del vino, Nicola Chiucchiurlotto is tending his vines near a quaint hamlet called Gioiella (meaning “little treasure”). Madrevite, his vineyard, has been in the family for three generations, and he too speaks of a deep connection to the land.

“I make pure wines that reveal the intrinsic qualities of the grape, in order to allow you to taste the complexity of the terroir,” he says, adding that environmental sustainability, and eliminating the use of chemical herbicides and pesticides, are some of Madrevite’s primary principles. Nicola’s grape varietals include Gamay del Trasimeno (known as Grenache in France), Trebbiano Spoletino, Grechetto, Sangiovese and Syrah. “My wines respect the land and the traditions of the place,” he adds, smiling. “My wines are sincere. They tell of the love and dedication of everyday work.”

In Italy, “slow” is the way people eat, and “gourmet” is a state of mind. On my journey, the “slow road” I travelled led me to real food, grown by real people in small artisan farms, often family-owned. It’s food that is prepared and eaten at the time nature intended, and with great passion. The Umbria-Tuscany border is an edible landscape, as well as a feast for the eyes and the soul. In this region, when nature speaks, farmers listen. And that is something hungry gourmands everywhere can celebrate.

Experience local life in a real village or town with a villa rental. Accommodation ranges from humble homes to super luxury abodes, with in-house chefs and service staff. Have a look on umbriatuscanyvilla.com to get an idea of what’s available. Meanwhile, gourmet food tours can be organised via Tuscany Slow Travel (tuscanyslowtravel.com/en), a locally owned travel company focused on the traditions, culture and environment of Umbria and Tuscany.

This story first appeared in the May 2021 issue of Prestige Singapore.

The post What to eat on on the Umbria-Tuscany border: Cheese, salami, prosciutto, fish, truffles and more appeared first on Prestige Online – Singapore.

Royal rides: These are the cars of royals around the world