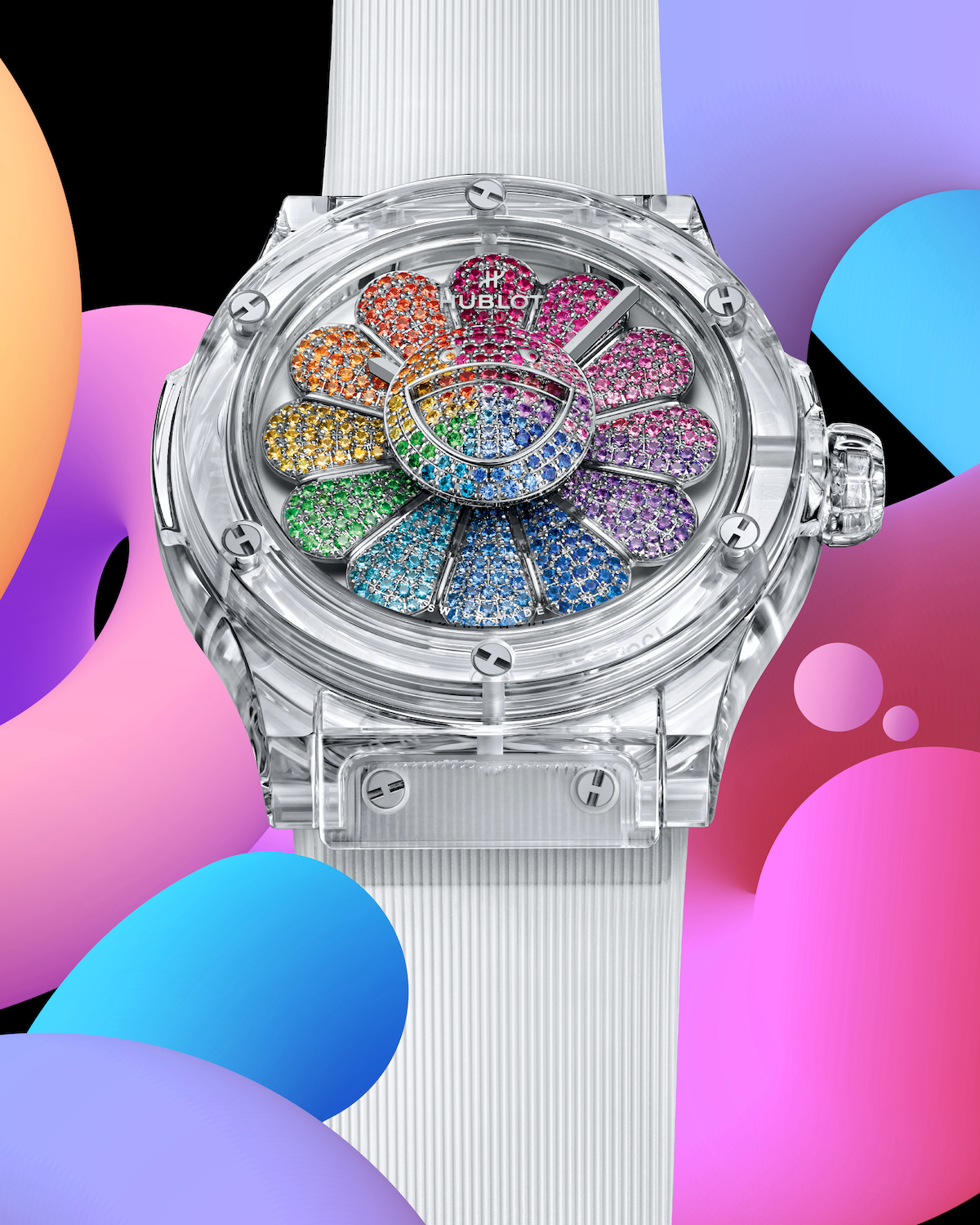 We single out eight of the latest eye-catching timekeepers in a spectrum of shades you can strap to your wrist. From the maison’s Sous les Étoiles collection is this high jewellery version of the Lady Arpels Planétarium model. The Sun, Mercury, Venus, Earth and Moon come to life, thanks to an exclusive watch module developed in partnership with astronomical watch specialist, Christiaan van der Klaauw. The celestial spectacle continues around the wrist in addition to the circular trajectory of a shooting star that indicates time with poetic grace. A gradation of blue sapphires and black spinels evokes the heaven’s many mysteries, while astral bodies reimagined in diamonds, spessartite garnets and coloured sapphires punctuate the bracelet’s three-dimensional volume. Glittering lines seem to whirl towards the dial, depicted in relief to create an effect of movement. Requiring 1,370 hours of work, the astounding piece is equipped with a Swiss-made automatic movement.

The second collaborative timepiece by Hublot and Takashi Murakami transforms the smiling flower, an icon of the Japanese artist, into a creation combining transparency and colour. Cut from sapphire crystal, the 45mm case of the Classic Fusion Takashi Murakami Sapphire Rainbow watch is perfect foil for the joyful three-dimensional bloom with 12 petals, whose polychromatic effect is achieved by 487 gemstones representing the colours of the rainbow: rubies, pink sapphires, amethysts, blue sapphires, tsavorites, yellow and orange sapphires. An ingenious Hublot developed ball-bearing system allows the petals to spin as the wearer moves. Driving the 100-piece limited edition is the HUB1214 movement with a 72-hour power reserve. It was the fascinating sight of fish twisting and turning in a graceful aquatic ballet that inspired the decoration on a trio of limited editions – named School of Fish – featuring Grand Feu cloisonné enamel dials. Creating the contours of the composition for each piece required 50cm of 24k yellow gold wire measuring a mere 0.05mm by 0.4mm in cross-section. The play of colours and glinting surfaces called for a palette of 15 to 21 shades of transparent, opaque and opalescent enamel. The dials were then put through 12 to 15 firings at a temperature of about 800 deg C. For the final touch, this Calatrava Ref. 5077/100R-049 in rose gold boasts a bezel and lugs set with 113 brilliant-cut Top Wesselton Pure diamonds that frame the vibrant aquatic-themed artwork perfectly. 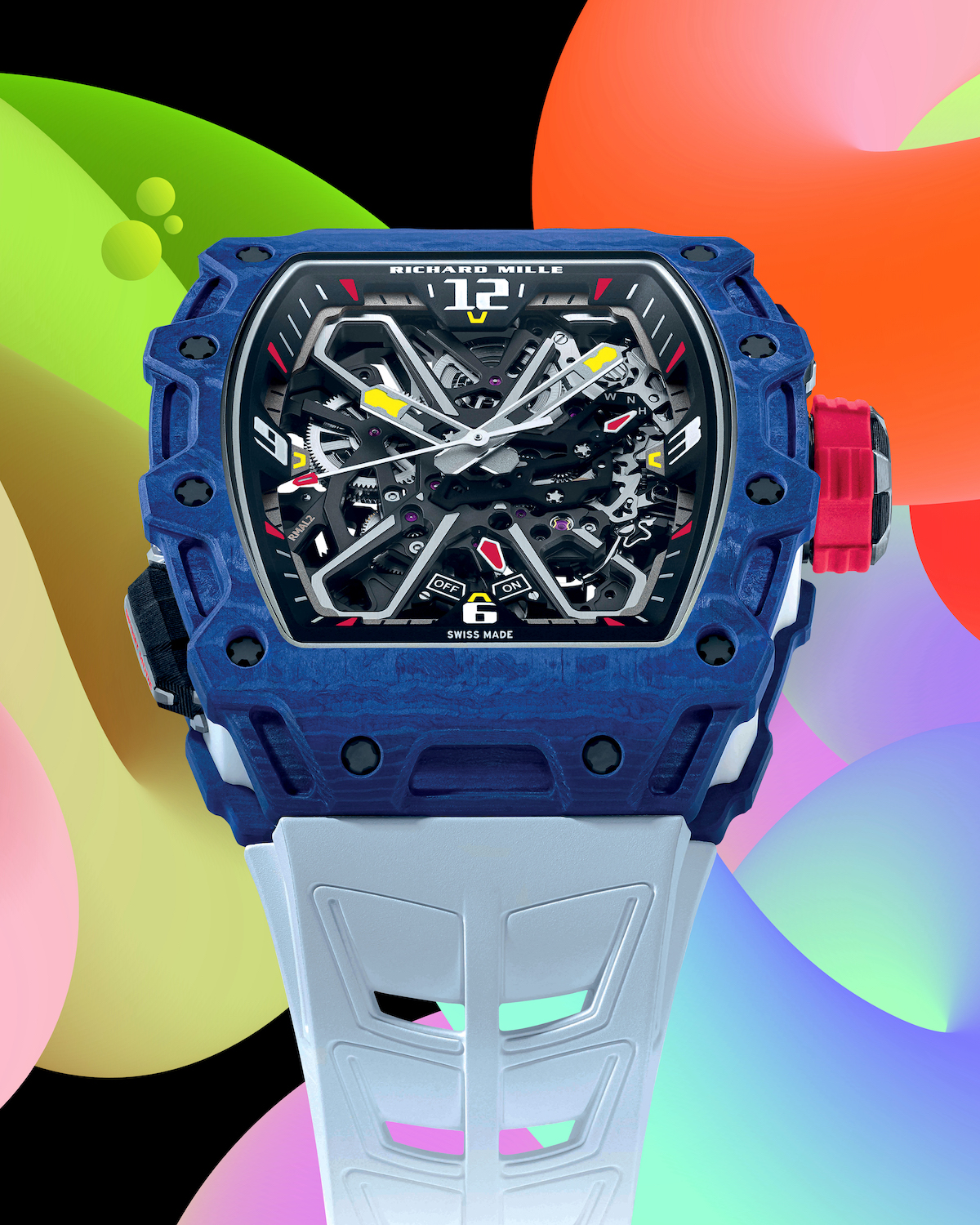 The RM 35-03 Automatic Rafael Nadal presents a new patented innovation that took three years to develop – the butterfly rotor. While the Calibre RMAL1 of the RM 35-02 already possesses a variable geometry rotor, the titanium butterfly rotor of this upgraded edition allows the wearer to directly interact with the rotor’s geometry. Like a driver who’s able to adjust the transmission style from city use to racetrack by activating a car’s sports mode, the wearer of the watch can control the movement’s winding speed based on his activity levels. A switchable Sports Mode suspends the movement’s automatic winding to protect the mechanism from excess wear during sports. Two variants are offered: blue Quartz TPT case with a white Quartz TPT caseband (pictured), and white Quartz TPT case and Carbon TPT with a Carbon TPT caseband. The titanium baseplate and bridges with a grey electroplasma and PVD treatment lend to the watch’s bold look, while the fully skeletonised movement can be admired from both sides. The maison’s signature sporty-chic collection welcomes six new iterations of the Alpine Eagle Frozen timepiece. Crafted in ethical white or rose gold, the latest editions are available in small (36mm) or large (41mm) sizes, and feature dials, cases, bezels and integrated bracelets that are fully embellished with precious stones and diamonds. Highlighting the gem-setting savoir faire of the house’s artisans, who spend no fewer than 20 hours working on each watch, the scintillating gems evoke tiny frost flakes on glaciers glimmering in the sun. This 41mm rose gold model with a bezel adorned with multicoloured sapphires in a rainbowhued gradient is equipped with the mechanical self-winding movement Chopard 01.03-C. Created with a matching necklace, the Baroque Spiral high jewellery watch from the Magnifica collection celebrates the audacity and sensuality of the Baroque movement. The extraordinary rose gold timepiece with a quartz movement flaunts hypnotic spirals, which symbolise life and evolution. The swirling Baroque motifs entwine in a magnificent setting of eight cabochon-cut emeralds, 10 cabochon-cut rubies, eight cabochon-cut sapphires and pavé diamonds totalling 21.38 carats. The flamboyance of the timepiece is exalted by a transparent faceted rock crystal set over the dial, which creates enchanting reflections when light hits it. A series of six new Royal Oak Concept Flying Tourbillon timepieces in pink or white gold add an unexpected playful twist to the maison’s iconic collection. The dial of each 38.5mm watch shimmers with faceted pyramids paved with blue sapphires, diamonds or rainbow-coloured gemstones. Finding the right stones, colours and contrasts was a crucial step in the design. This rainbow model with a diamond-set case features 12 types of multicoloured baguette-cut gemstones, including rubies, tsavorites, emeralds, topaz, tanzanites, amethysts and coloured sapphires. The stones have been meticulously chosen for their vivid hues and smooth gradation when set together. The openworked barrel of the hand-wound Calibre 2951, at 11 o’clock, offers a rare glimpse of the coiled mainspring – the watch’s power source. Winner of the Ladies’ Watch Prize at the 20th Grand Prix d’Horlogerie de Genève (GPHG), the Limelight Gala Precious Rainbow flaunts a kaleidoscopic array of green tsavorites and coloured sapphires ranging from red, orange, yellow, blue, indigo to violet around the bezel and on the lugs. Sourcing for progressively sized coloured gemstones of this calibre was extremely challenging for Piaget’s gemologists. Additionally, the setting of this rose gold piece also demanded particular patience and expertise from the maison’s gem-setters, who needed to create the perfect colour and size transition from one gem to the next using an intricate technique of serti descendu, which amplifies each stone’s brilliance. The maison’s hallmark Palace Décor bracelet and dial add to the remarkable visual spectacle of this 32mm creation.

This story first appeared in the February 2022 issue of Prestige Singapore.

The post Wear the rainbow on your wrist with these colourful watches appeared first on Prestige Online – Singapore.