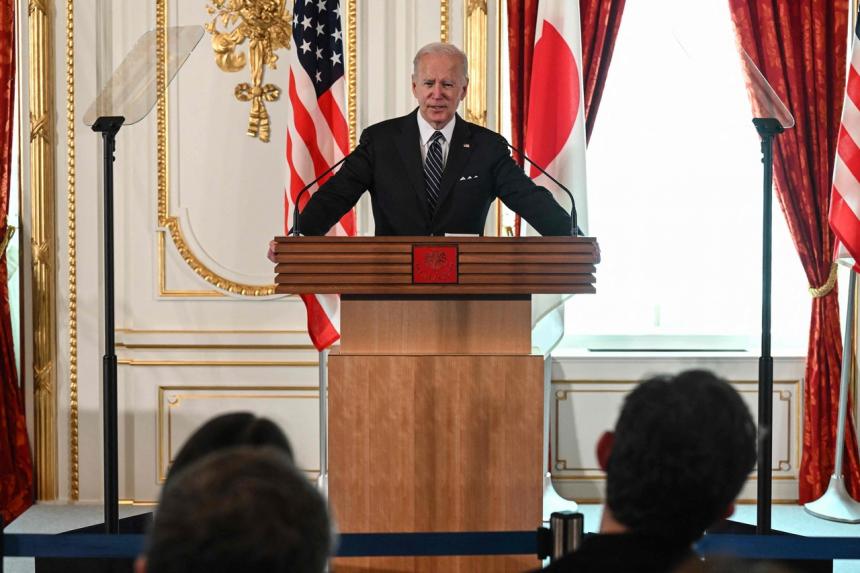 TOKYO (AFP) – President Joe Biden launched a new Asia-Pacific trade initiative on Monday (May 23) in Tokyo, with 13 countries including India and Japan signing up, although questions about the pact’s effectiveness remain.

Biden formally unveiled the Indo-Pacific Economic Framework for Prosperity, or IPEF, on his second day in Japan, where he is also holding talks with Prime Minister Fumio Kishida before joining a regional Quad summit on Tuesday.

“This framework is a commitment to working with our close friends and partners in the region on challenges that matter most to ensuring economic competitiveness in the 21st century,” he said.

Unlike traditional trade blocs, there is no plan for IPEF members to negotiate tariffs and ease market access – a tool that has become increasingly unpalatable to US voters fearful of seeing homegrown manufacturing undermined.

The countries touted IPEF as a framework for what will ultimately become a tight-knit group of trading nations.

“We share a commitment to a free, open, fair, inclusive, interconnected, resilient, secure, and prosperous Indo-Pacific region,” they said in a joint statement.

“Deepening economic engagement among partners is crucial for continued growth, peace, and prosperity.”

Together, the participants account for about 40 per cent of global GDP and “there are other countries that could conceivably join us,” Biden’s national security adviser, Jake Sullivan, told reporters.

Biden has pushed to rapidly rebuild strategic military and trade alliances weakened under his predecessor Donald Trump since taking office in 2021.

IPEF is intended to offer US allies an alternative to China’s growing commercial presence across the Asia-Pacific.

However, there is no political will in Washington for returning to a tariffs-based Asia trade deal following Trump’s 2017 withdrawal from the Trans-Pacific Partnership – a huge trading bloc that was revived under a new name in 2018, without US membership.

While the TPP reduces trade barriers for members, US Secretary of Commerce Gina Raimondo emphasised to reporters that IPEF was not designed to go down the same route.

The “framework is intentionally designed not to be a same old, same old traditional trade agreement,” she said.

Even so, Japan’s Kishida said there is still an appetite for US involvement in the larger pact abandoned by Trump.

The country welcomes the new framework and will “participate and cooperate”, he said, but “from a strategic standpoint, Japan hopes that the United States will return to the TPP”.

China has criticised IPEF as an attempt to create a closed club. Sullivan rejected this, saying “it is by design and definition an open platform”.

Taiwan, the self-governing island that China claims sovereignty over, has pointedly not been brought into the initial line-up – despite being an important link in supply chains for microchips.

Sullivan said nevertheless that the United States is “looking to deepen our economic partnership with Taiwan, including on high-technology issues, including on semiconductors and supply chains”.

This will happen, however, only “on a bilateral basis”.

The United States faces scepticism, given the lack of incentives to go along with IPEF’s plan for smoother integration.

Without offering increased access to the huge US market, it is unclear what enforcement mechanisms could be applied.

But Raimondo said that if IPEF had been in place before the Covid-19 pandemic triggered mass economic shutdowns, the United States would have “experienced much less disruption”.

And more broadly, the US trade-boosting initiative is welcomed by businesses that “increasingly look for alternatives to China”, she said.