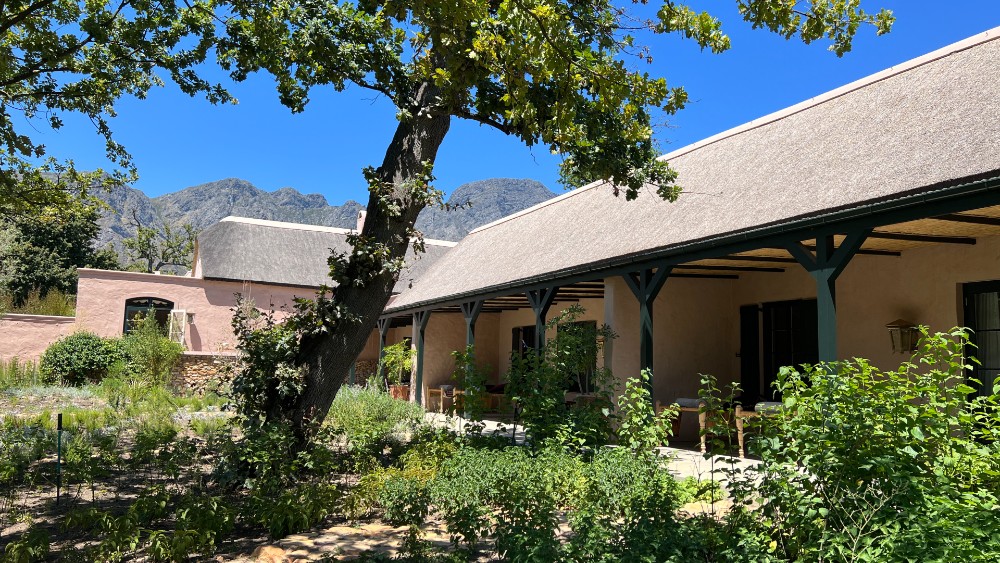 Longtime lovers of South Africa’s most stylish hideaway, Babylonstoren, grumble that its luster has somewhat tarnished. It opened as a chic, exclusive farm stay in late 2010, a passion project for onetime design magazine editor Karen Roos and her billionaire businessman husband Koos Bekker.  Back then, this reboot of a farm first established in the late 17th century was an insiderish secret, anchored by a clutch of minimalist rooms set around a formally planted, 8-acre kitchen garden. Indeed, Roos always said they simply bought it as a weekend getaway, a nod to Becker’s own childhood on a farm.

Babylonstoren has changed markedly in the decade or so since—and not for the better. “We get bigger every year,” says one of its affable guides, as she strolls around the site which now stretches across thousands of acres. Indeed, in the decade or so since it opened, Bekker and Roos have slowly acquired what seems like whatever land is in view, and folded it into their farm. Today, coachfuls of curious visitors pour into its parking lot each weekend, lured by a complex of shops and tasting rooms—keen to try the tinctures made from the herbs grown onsite, or some its wine.  It’s clearly thriving, but it’s lost much of its luxury cachet. Thankfully, though, there’s a new alternative just twenty-five minutes’ drive away in Franschhoek, that offers all that Babylonstoren once did, and more: Sterrekopje.

Robb Report got a sneak peak of this soon-to-be landmark not long after it opened earlier this year. It’s easy to overlook: The entrance is a non-descript gate by the roadside, and there’s no snaking line of coaches to give it away. The main building is set far from the entrance, deep into the 120-acre or so site. It’s a working regenerative farm complete with just 11 rooms, but the goal of this hotel isn’t anchored solely in stylish hospitality; rather it’s intended as a place for re-centering, a luxury wellbeing retreat. “It’s about stepping out of something: work, family, life,” says 35-year-old Fleur Huijskens, sitting on one of the sofas in the sumptuously reconfigured main house, “Taking a break, getting away for a bit.”

A Bedroom at Sterrekopje  Mark Ellwood

The Dutch entrepreneur and her wife, Nicole Boekhoorn, intend for Sterrekopje to offer a ritualized way to recharge: They’re structuring visits as four- or seven-day stints, incorporating different treatments each day as a guest goes through the journey of their stay—think reflexology, breath work or a private yoga class. “It’s all a gentle invitation, and no-one’s obliged to do anything,” Huijskens adds, reassuringly, noting that check-in is centered around a ritual foot-washing rather than perfunctory paperwork, “It’s not created to make money. This is a heart project.”

Nicole, who had logged time working in an HIV clinic in South Africa, long wanted to find a hospitality project in the country and was almost instantly smitten when she saw this farm site. It had remained in the same family for five generations before it was first sold, to a couple; after he died, his widow decided to sell, and Nicole and Fleur snapped up the property as both home and a working retreat. Since then, they’ve worked with designer Gregory Mellor on a sensitive renovation that’s resulted in 11 rooms (there are three other cottages as-yet unrehabbed).

The palate throughout is heavy on deep reds and ochres, and the walls are covered with artwork and site-specific murals, which took several months for a team of artists to complete. The raised four-poster beds in most rooms were custom-made in Lamu, Kenya; one suite has an enormous beaten copper plunge tub while another’s bath is made from an old wine barrel. On the writing desk in each room, look for paper. Fleur explains that she encourages guests to write out their hopes and dreams on it, while in residence. Mail that letter back to yourself as a memento, she adds, and then plant it in the garden. The seeds embedded within the paper will soon germinate.

One of the many soaking tubs at Sterrekopje  Mark Ellwood

Fleur says that the treatments here will include conventional offerings, like yoga, but that she’d also like to invite temporary practitioners to spend time onsite to offer hypnotherapy or reiki, for example.  The standalone spa features one huge tiled hammam-like room, where immersive, purifying massages can take place, as well as another where bunches of dried grass hang from the ceiling, like a forest of chandeliers.

There’s an arts-and-crafts studio onsite, too, with its own kiln, and an extensive garden including a mansion-sized chicken coop. She says that the couple plans to produce small batch olive oil and wines here, all using regenerative methods, as well as much of the food that will be served to guests. Walking around the property, Fleur has a keen eye—she stops to pick up litter in the garden, a cigarette butt probably discarded by one of the workmen finessing the property.

Barely open for three months, Sterrekopje has already gained major attention among luxury Africa experts, like Deborah Calmeyer, from luxury specialist Roar Africa, was an early guest and is now recommending it to clients, the perfect bookend for a high-end trip to the bush. She even plans to become a regular herself. “It’s a magical, therapeutic place where time seems to stand still,” she says. “It’s the quiet that struck me most when I arrived—the birdsong, the sway of the trees in the breeze, the soft crush of gravel underfoot. I can’t wait to go back.”