Veganism is on the rise.

Even so, the misconception that meat-free, dairy-free or plant-based dishes taste like rabbit food prevails. Yet a quick look into the world’s greatest culinary traditions would reveal that there’s plenty of vegan dishes that have existed long before the word “vegan” even entered mainstream parlance.

Here, we look at some of the best vegan cookbooks offering up mouth-watering recipes that are as good for the body as it is for the soul. Gill, who is originally from Singapore, became vegan when she moved to the UK to study medicine at Oxford University. She then started turning the marvellous Asian cuisine into delicious plant-based dishes. This book is the testimony of her success.

The culinary delights featured are from Thailand, Malaysia, India, Japan and China. So, you’ll find how to make pineapple fried rice, tandoori cauliflower “wings”, jackfruit biryani, red bean pancakes and shiitake ramen among the 90 recipes that are easy to make and affordable. Be it pad Thai without the fish sauce and curry without ghee (a type of clarified Indian butter) — even substitutes remain true to the original. There are ideas to create your own fusion Asian dish from leftovers. The book has over 100 photographs of the dishes that complement Gill’s interesting narrative style Terry has been the chef-in-residence at the Museum of the African Diaspora (MoAD) in San Francisco since 2015. He is known for his activism for food justice and his love for all things plant. The book brings together over 100 delicious plant-based dishes from Africa, the Caribbean and Southern America taking you along a healthy food journey marked by Terry’s memories and thoughts about community building.

Recipes include a dish inspired by the Kenyan irio, which is made from mashed potatoes, peas and corn. There is another inspired by Moroccan tagine — cinnamon-soaked wheat berry salad with dried apricots, carrots, and almonds. You can learn the art of making Caribbean-inspired cocoa spice cake with crystallised ginger and coconut-chocolate ganache or try your hand at making a dish in which Ethiopian grain teff is combined with stone-ground corn grits from the Deep South, and North African zalook dip. If you have a sweet tooth, you’d find the refreshing roselle-rooibos drink perfectly tuned to your taste bud. Not just vegans, even vegetarians and omnivores are guaranteed to be delighted by the dishes this book highlights.

It also contains international music and other book recommendations for a wholesome cooking experience.

Isa Does It — Isa Chandra Moskowitz Moskowitz is the owner of the popular American vegan restaurant Modern Love. Her expertise in vegan cooking shines through in the recipes featured in Isa Does It. Keeping in mind busy schedules, Moskowitz ensures that the dishes are quick to make but do not compromise on taste. This is why the recipes have been described as “supermarket-friendly”.

Starting with a quick introduction on how she does cooking to how to complete your kitchen and pantry, the book presents 150 recipes divided into sections such as soups, salads, Sunday night suppers and desserts. Among the delectable delicacies are bistro beet burgers, sweet potato red curry with rice and purple kale, and summer seitan saute with cilantro and lime. Check out the everyday pad thai, which is meant for four and can be cooked in just 30 minutes. Moskowitz has her “super top-secret ingredient” going into the dish, which she says she’d eat for every meal if vitamin deficiency was not an issue.

The fresh ideas in the book are not just for those getting introduced to vegan cooking but also for skilled chefs. 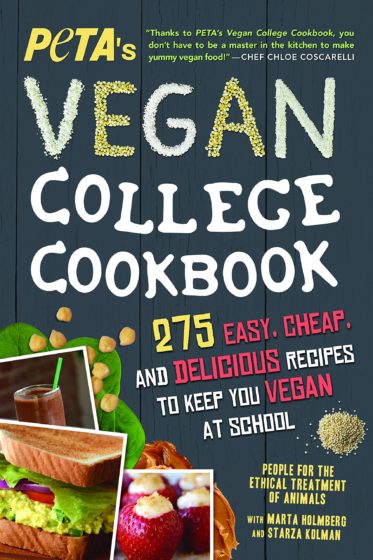 With 275 recipes, you’ll be spoilt for choices. The idea, as the book’s title goes, is to give students a chance to whip up tasty and healthy dishes rapidly. One of the best things about this cookbook is that none of the recipes requires you to have even intermediate-level skills in cooking. The dishes are so easy to make that perhaps the most advanced kitchen equipment would be the microwave. And preparation won’t burn a hole in your pocket.

The book has everything to serve at any time — from breakfast to dinner. Each is guaranteed to boost energy and deliver satisfaction. The cookbook is ideal for beginners who are entering the domain of plant-based foods. Besides a foreword by PETA President Ingrid E. Newkirk and tips on what a vegan kitchen should have without breaking the bank, there is a very helpful cheat sheet that lists all the “cheat” meats, egg and dairy alternatives.

The book was originally released in 2009 and has since been updated with new recipes. Expect to find dishes such as walking taco, chocolate chip hug in a mug, butt ugly sticky buns, frozen frat balls or pancake in a mug. With his Japanese-influenced dishes, Anderson was the youngest winner of the Masterchef in 2011 and is the owner of Japanese restaurant Nanban.

This book is the vegan spin-off of his successful 2017 non-vegan cookbook titled JapanEasy. Containing more than 80 plant-based Japanese recipes, Vegan JapanEasy is meant for those who think that the country’s food is all about beef, pork and tuna. It doesn’t completely take the ‘substitution’ route and focuses more on original Japanese fare that is originally vegan or at least close to it. To help readers, Anderson also details ingredients and how they can be used outside of Japanese cuisine.

You might also want to try the primavera fried rice, a name that Anderson borrowed from the pasta primavera invented in New York in the late 1970s and gave to his light fried rice made with spring season vegetables such as peas, asparagus and wild garlic. For dessert, you can try the soy sauce butterscotch brownies. Sisters Ruth and Vicky are the co-founders of the food blog May I Have That Recipe. Inspired by their readers to release a cookbook they wrote Tahini & Turmeric — a classic guide to 101 inventive vegan Middle Eastern recipes. Each one is easy to make, healthy and flavourful.

They were raised in Barcelona by their Syrian-Lebanese Jewish parents before moving to the US. This cultural combination helps them to successfully merge the food styles of the Mediterranean with that of the Middle East and is reflected in their recipes. So, we have brunch specials like zucchini fritters with yoghurt-cucumber sauce, entrées such as harissa meatless meatballs with aromatic turmeric broth, and desserts such as creamy tahini cheesecake and rose water pudding tartelettes with pomegranate and pistachios.

The gluten-free recipes are created to cover breakfast, lunch and dinner. Each dish is beautiful to look at, something that you’d note in the colourful photographs. The authors explain what Middle Eastern foods are all about and also provide tips on how to stock up the pantry to save time when cooking, even though the recipes are designed for busy lives. Then there are useful tips such as using from-scratch dough as a substitute for spring roll wrappers or pita bread.

If you are wondering about the reason behind the book’s title, it is because the rich tahini and the fragrant turmeric are the most versatile ingredients in Middle Eastern cuisine.

But I Could Never Go Vegan! — Kristy Turner Dispelling all possible excuses that people give for not going vegan, this outstanding cookbook is not only a treasure trove of vegan recipes but also makes for an entertaining read. Every chapter is titled with an excuse and then goes on to busting it.

So when you say “All those special ingredients are way more expensive,” be ready to be proven wrong with ideas like homemade seitan, barbecue sauce and tofu sour cream. Or if you think “My friends won’t want to come over for dinner,” you’ll have to make dishes like carrot cashew pâté or gnocchi alla vodka and change their mind.

And for sweets, you can try making desserts like dark chocolate sorbet or mango lassi ice cream, which are guaranteed to be a hit.

There are 125 recipes covering everything from breakfast to dinner. Each has a quick reference guide indicating if it is gluten-free, soy-free, nut-free and the like. So whatever doubts you may have regarding veganism, this is the cookbook meant to convert you. The photographs, taken by the author’s husband Chris Miller, perfectly compliment Kristy’s masterful writing. 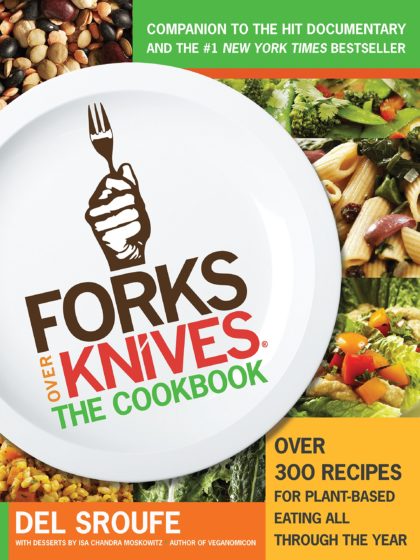 Del Sroufe, the co-owner and executive chef of plant-based American meal delivery service Wellness Forum Foods, is the man behind some of the delicacies featured in Forks Over Knives documentary. The cookbook, containing over 300 recipes, is written by him and named after the acclaimed film, focuses on low-fat vegan dishes. The recipes are oil-free and extremely healthy. So, those who are on a journey of fitness will find this book helpful.

Breakfast quinoa with apple compote, grilled eggplant steaks, grain diet of polenta pizza with tomatoes and basil or apricot fig squares, bursting with berries cobbler — whatever you pick, all the dishes are delicious, simple and affordable.

The recipes are designed for all seasons and make effective use of wholesome fruits, vegetables, grains, and legumes. The book also has contributions from other culinary wizards like Isa Chandra Moskowitz, Darshana Thacker, Judy Micklewright and Julieanna Hever. No wonder the cookbook is a New York Times bestseller. If you want to take an unforgettable journey around the world with vegan recipes, this is the cookbook you should invest in. There are around 500 different recipes from countries as diverse as Iraq and Ireland, Peru and Philippines, and Albania and Zambia. There is a phenomenal culinary diversity that becomes more appetising with traditional cooking techniques that bring out the best in the fruits and vegetables which go into the dishes. You have everything to satisfy all your taste buds and moods, at any time of the day or night and all year round.

Jury is an internationally acclaimed chef from Toulouse, France, whose life changed after he suffered heart failure due to excess work and erratic food habits. He then realised the importance of vegan food and, in 2007, opened La Mano Verde, his first vegan restaurant, in Berlin.

In this book, he shares his experiences through the nutritious information and the usage of heart-healthy foods such as flaxseed, apple cider vinegar and nutritional yeast. The idea is to make you understand that vegan food made using garden-fresh vegetables and fruits is not only delicious but also necessary for the body.

The book is divided into seven sections: starters, salads, soups, main courses, grains and beans, pasta and noodles, and desserts. Take your pick from roasted pumpkin and lentil soup, vegetable paella made of kidney beans and corn, lasagna with wild mushroom sauce or any of the numerous soul-satisfying dishes. Instructions are pretty simple and the photographs make you want to try the dishes now. Considered by many as one of the best guides to vegan baking, you will find in this book several delights to satiate your savoury, sweet and fluffy cravings. What more? These are substitution-free.

Price, who is the name behind the famous Gretchen’s Vegan Bakery, uses ingredients such as arrowroot and aquafaba traditionally to conjure up outstanding items that are instantly fulfilling. There are 125 vegan baking recipes including both innovations and classics. Price introduces new baking techniques and also presents a guide to vegan baking substitutions as an additional help for eager readers. The cookbook will help you make goodies like pumpkin pie with oat nut crust, triple chocolate glazed doughnuts and lemon lavender shortbread.