She is a 19-year-old white, Afrikaans-speaking undergraduate who was recently elected to the Student Representative Council (SRC) of Cape Town university on an EFF ticket.

But in a country as racially charged as South Africa, her stance has not gone down well with some people. When Ms Griesel announced her SRC candidacy in September, one social media user described her as a “race traitor”.

Twenty-seven years after the end of white-minority rule – when Nelson Mandela was elected as president in South Africa’s first democratic election, calling the country “the rainbow nation” – Ms Griesel tells me the backlash shocked her.

“Being called a race traitor was something that I found very interesting and very telling about South Africa today. It insinuates that there’s still an ‘us’ and a ‘them’ club.”

To understand the reaction she has faced – one needs to understand how the EFF has shaken up politics in South Africa.

Formed in 2013, it is led by the fiery Julius Malema, who has modelled himself on Venezuela’s late President Hugo Chavez and unapologetically promotes the interests of poor black South Africans.

The party describes itself as “a left-leaning, radical, anti-imperialist and economic emancipation movement, inspired by the broad Marxist-Leninist school of thought.”

Members are disruptive, literally and figuratively.

They are often accused of being anti-white. That is because they have repeatedly demanded that white South Africans give up the land taken from black people.

Some EFF supporters occasionally sing the apartheid-era chant “Kill the Boer, kill the farmer”, a highly controversial song that a court ruled as hate speech and which is seen as being directed against the white farming community.

What is undoubtedly the case is that “Red Berets” are unhappy with the status quo.

A few years ago, EFF MPs memorably shook the establishment by their antics in parliament, which is dominated by the African National Congress (ANC) – the liberation movement that has governed since the end of apartheid.

The male MPs were dressed in red construction overalls, their female counterparts were in red dresses and white aprons – the signature EFF uniform representing workers.

The nation watched the theatrics on national television as the speaker of parliament tried in vain to calm the situation.

They were demanding that then-President Jacob Zuma, who has been embroiled in corruption allegations for years, give back taxpayers’ money for cash spent renovating his private home.

The former head of state has since returned some of that money and denies any wrongdoing, but he is emblematic of the problems the ANC has faced over the last few years.

With local elections to be held on Monday, the governing party faces a trust deficit, especially following the nationwide power outages of recent months and years.

The rolling blackouts are crippling an economy that has already been bludgeoned by the Covid-19 pandemic.

As a result, the rate of joblessness now stands at a record 34.4%.

The main opposition party – the Democratic Alliance (DA), which traditionally has a white support base – wants to capitalise on the ANC’s failures.

It has repeatedly claimed it governs the most efficient municipalities in the country.

But empirical evidence paints a different reality: areas dominated by people who are not white, such as the Cape Flats, Nyanga and Gugulethu, in the DA-run Western Cape, are rocked by alarming murder rates, gangsterism and joblessness.

Like Ms Griesel, the EFF hopes voters will want to cause an upset.

‘You can’t pretend to be blind’

Her success during the university vote – she was one of 15 people elected to the council – proves just how popular she is among her peers.

“I plan to be the eyes, ears and voice of the students and continue to represent them to the best of my ability,” says the teenager, who is studying politics, philosophy and economics.

Although born eight years after the fall of apartheid, Ms Griesel says she has always been aware of the legacy of its racist policies.

“I grew up in a family that, from a very young age, allowed me to question things. When you live in South Africa you see things.

“You can’t pretend to be blind to the inequalities and the socio-economic issues that South Africa presents.”

She is referring to joblessness and poverty in black communities.

But that is not the only factor that gave birth to her activism: “I went to a high school where there was plenty of blatant racism and inequality.

“So, ever since then, I have adopted the idea that everyone who had a historic part in creating the inequalities of today, has a personal responsibility to take ownership and try to be a part of dismantling the systemic racism and oppression that still exists in South Africa today.” 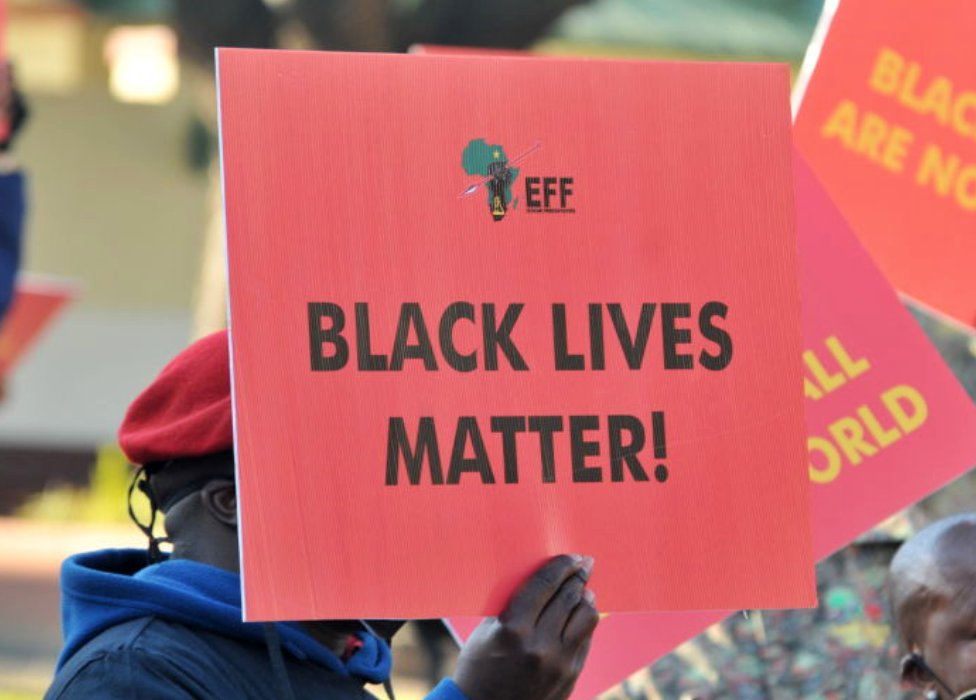 People see pro-black parties such as the EFF as anti-white parties, and that’s not the case”

Ms Griesel wonders why those who have trolled her do not understand that her race should not decide how she acts.

“It’s the same insinuation that people see pro-black parties such as the EFF as anti-white parties, and that’s not the case.”

As a white person Ms Griesel, however, remains very much an outlier.

This does not mean there has not been change.

“In university spaces there are a lot more white EFF students,” she says.

But the reality is that the group she is referring to is quite small.

There is still a long way to go before South Africa sheds its skin of identity politics.

Mpho Lakaje is a journalist based in Johannesburg.

More on this story