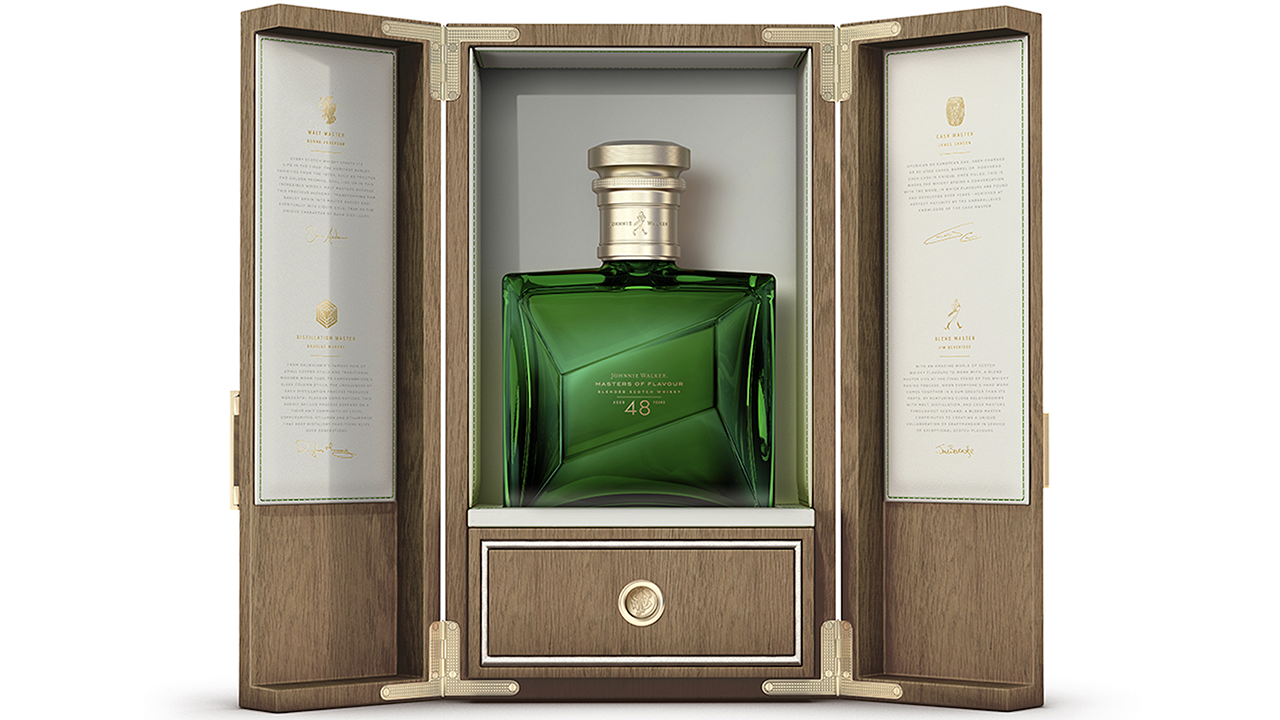 The release of a limited edition bottle of Johnnie Walker is reason enough to celebrate on any occasion, but the launch of their latest Masters of Flavour? At a price of $37,000 it might be less about celebrating and more ab out calibrating the fastest way to get your hands on bucks to buy it. Especially as only 15 of the bottles will be arriving in Australia, out of 288 globally.

There’s few Scotch whiskies that have both the clout and commercial scope as Johnnie Walker. A go-to brand for a whisky that’s sits comfortably on the palate for an evening tipple or more adventurous creations rich and robust that prove Johnnie Walker truly masters of the malt. Part of their Masters of Flavour series, this new limited edition bottle created by JW’s Master Blender Jim Beveridge brings both of these aforementioned elements into a bottle of whisky that pays tribute to the very process of whisky making – the malting, distilling, cask maturation and blending.

Crafted with whiskies aged at least 48 years, Beveridge (honestly, has there ever been a better name for the job) carried that spirit of collaboration and blending of talent into the process of development, working with some of the most respected names in the whisky industry and fellow masters: Malt Master Donna Anderson, Cask Master James Carson and Distillation Master Douglas Murray.

To get a better appreciation of the artistry and effort that went into this dram, ICON spoke to Johnnie Walker’s ambassador for Australia Katie Nagar about the latest Masters of Flavour creation.

ICON: The most important question first – what does it taste like?

Katie Nagar: The Johnnie Walker Masters of Flavour has managed to maintain an incredible depth of character while allowing complexity to develop over time. On the nose, it has a soft and gentle smoke, reminiscent of seaweed and salty air, which gives way to rich dried fruits. Notes of molasses linger before smoke gently weaves back through the senses. These aromas give way to rich fruit flavours bursting with currants before a gentle spice starts to build on the palate. Cinnamon infused apples combined with star anise, crushed peppercorn and warming oak embers, enveloped in waves of baked caramel and rich butterscotch before culminating in a gentle and warming smoke in the finish.

ICON:The third, and final, in the Masters Series – how do the notes in this bottle differ to the other two? Did you cultivate a common flavour or palate between the three?

KN: All of the releases from the Masters Series are designed to be rich, complex and balanced while showcasing different aspects of the blenders’ art. Each one of the exquisite, limited releases has its own specific theme that pays homage to the history behind the Johnnie Walker business. Each will showcase a unique blend of different rare whiskies within our expansive collection, offered at varying age statements.

The latest and final release, Master of Flavour, celebrates the art of whisky making, shining a light on how each of the four main steps in the process — malting, distilling, cask maturation and then blending –contribute equally to creating extraordinary flavours – from grain to glass. This 48-year-old-blend is crafted using fleetingly rare whiskies from the ghost distilleries of Port Dundas, Brora, Glen Albyn and Glenury Royal as well as rare expressions from the iconic distilleries of Cameronbridge, Blair Athol and Dalwhinnie.

The Master’s Ruby Reserve celebrates Master Jim Beveridge’s 40th anniversary at Johnnie Walker by exploring whiskies that have matured for at least 4 decades, including expressions that were amongst the first whiskies Jim worked with. For this release, Jim sampled and selected eight exquisite 40-year-old whiskies that evoke some of his early memories at Johnnie Walker – including expressions from the ‘ghost’ distilleries of Cambus, Carsebridge, Pittyvaich and Port Ellen. These rare whiskies are perfectly balanced with highly aged expressions from the distilleries of Talisker, Royal Lochnagar, Glendullan and Cragganmore.

ICON: In the process of choosing the expressions that would make this new Johnnie Walker experience, what details were you looking for?

KN: As in every Johnnie Walker offering, finding a harmonious balance of robust character and complexity is the ultimate goal. Part of what makes this Masters Series so challenging is limited availability of advanced age stock. The Master Blender must evaluate each whisky’s unique flavour attributes as a solo player as well as how it will interact as a team.

ICON: Does each one provide a particular note or flavour to the finished bottle?

KN: Absolutely. The real skill to the art of blending is understanding the unique nature of the whiskies, but also ultimately how they will interact together. It’s not as easy 1+1=2 as the interaction of the constituent whiskies will create flavour experiences that are more than the sum of their individual parts. For instance, the waxy smoke of Brora and the nutty spice of Blair Athol need the rich, creamy character of the single grain whisky from the closed Port Dundas distillery to balance and create an integrated mouthfeel.

The post The New Johnnie Walker Masters Of Flavour Is Actually A Masterpiece appeared first on ICON.