There are dishes that are double-stranded with the concept of cooking with fire heat. Dishes that fortunately will never be able to shake off their humble and rustic origins and for this reason still represent the maximum enjoyment of the shanties between friends or Sunday lunches in the simplicity of the house in the countryside. They are those preparations in which usually the pig reigns sovereign and that by their self are able to create atmosphere. For example, who does not appreciate a nice porchetta with the crunchy rind, cut and served on an olive cutting board in the middle of a cheerful and festive table or appointments at sunrise with friends, to cook for long hours the Sardinian style porceddu? But if these recipes make me think of the summer, there is one, perhaps less common but which I immediately associate with the cold months: the Roast Ham. It may be cause of the memory of my youth reading of the comics Asterix but the ham calls me to the pleasure of warming up in front of a fire place, a battered wooden table and a ceramic mug overflowing with beer. I’m talking about a rustic bone in pork leg with a tasty and golden crust that still smells of wood, cut at the moment at the center of the table with a rustic knife and served directly in the plate of the guests. Do you want to try the experience too? 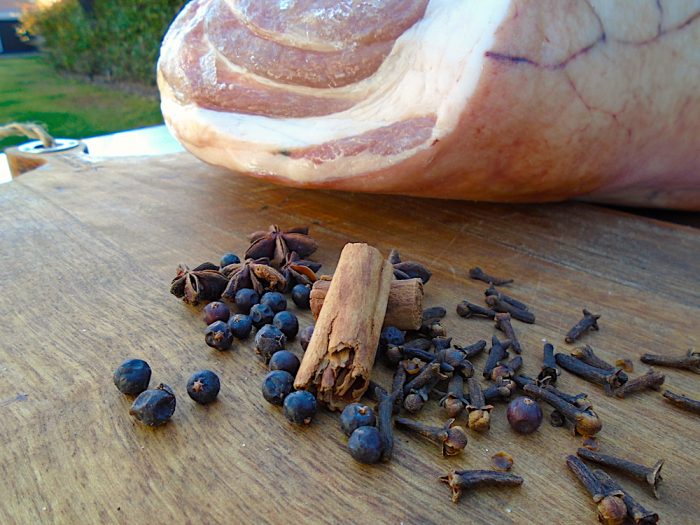 Before starting, however, we must clarify: we are talking about a recipe of the kind of the old ones, with 14 days of rest in brine, a whole leg of pork to work and manage, adequate containers and space and a little patience and dexterity. But by the hell if it is worth it! Smoked Ham is an unmissable event of my winter. 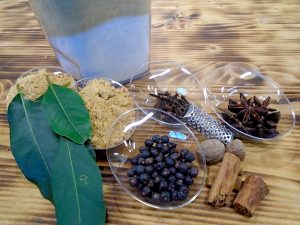 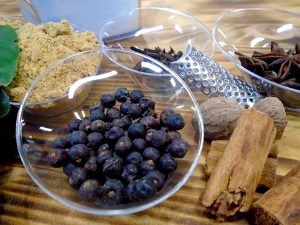 You can commonly find the whole pork leg at the cash & carry or order it in the butchers. Before starting, you need to work the leg removing the rind, cleaning the in view bone from the cartilages and trimming the excess fat and tendons. As usual, you can do it in the way that is most congenial to you and you like but here I report you the way I do.

How to Trim a Pork Leg

Place the leg on a cutting board of suitable size, with the stifle bone facing downwards. Then incise the rind for the long and around the shin with the boning knife. 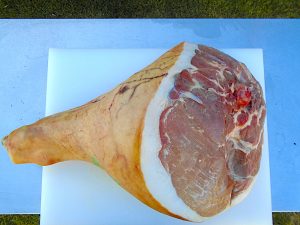 Now proceed to remove it starting from the incision, towards both directions. Then turn the leg on the other side and keep on trimming until it is completely separated. 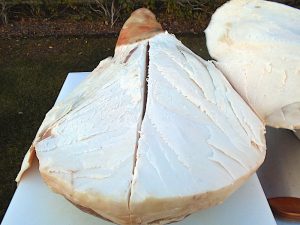 Incise then the remaining rind along the shin and repeat the same operation until it is off too. 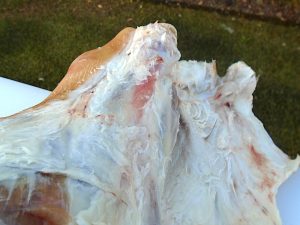 Now trim the thicker layers of fat on the leg to a maximum of half a centimeter. 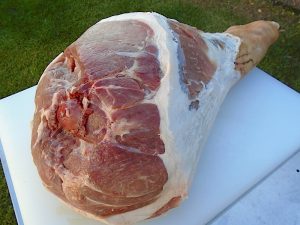 With the tip of the knife, incise the visible joint of the shin, until the cartilage is separated, remove it and leave the bone exposed. 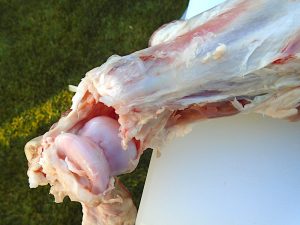 Finally, release the tendon and clean the point of conjunction with the thigh giving the leg a regular shape. 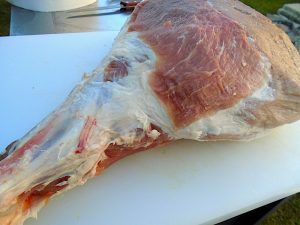 To contain a cut of meat the size of the ham we used the Briner of the mythical Faustino but you at home you can use a bucket or any other container that is more convenient for you to place in a cold place, presumably the fridge. To make the brine proceed first to put a bottle of water in the freezer. Then boil a couple of liters of water in a pot. 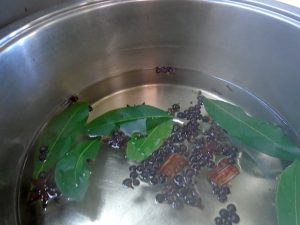 As soon as it boils, turn off the heat and pour in all the spices. As in tea or infusions, after a few minutes the spices will release color, aromas and flavors in a much more intense way than the same operation do in the cold water. 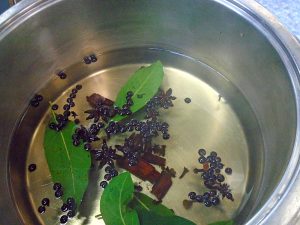 Add the mustard rub and mix until it is completely dissolved in the infusion. 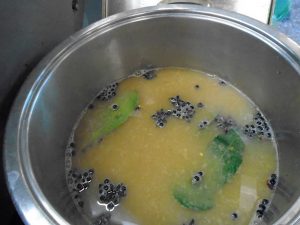 In the briner pour the salt, sugar, the instacure and a couple of liters of water, stirring until dissolved. Add the water taken from the freezer, then the infusion still warm. Put the leg in the brine and add the last two liters of water to fill. If this is not enough add water and salt respecting the proportions. 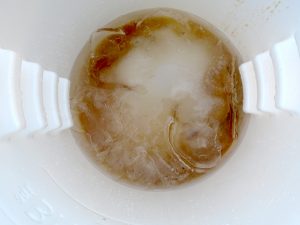 Close the briner and move it to the fridge. Let the ham rest in brine for 14 days. 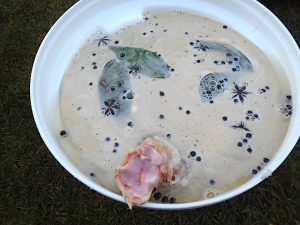 I read about a system to desalinate large cuts of meat in a very effective way after long stops in brine: rest for 60 minutes in boiling water and that is what we will use on this occasion. First we remove the ham from the briner and empty it of the brine. 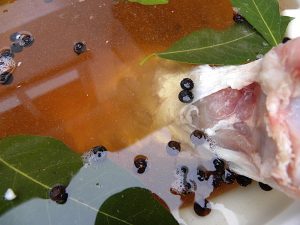 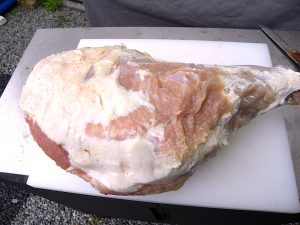 Then proceed to incise the ham with a knife superficially, not going over half a centimeter deep and forming a nice diamond pattern whose purpose will be only aesthetic. 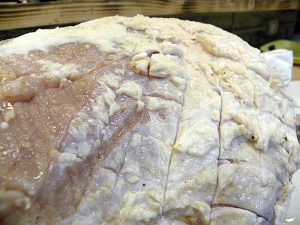 Put the ham back in the briner and pour in a pot of water brought to the boil in the meantime. If this is not enough, add hot water from the tap to cover all the meat. Leave the ham in the briner for 60 minutes. 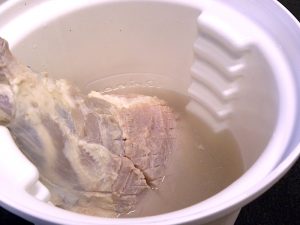 To bake the ham we will use our trustworthy Weber Summit Charcoal, which will be stabilized at 140ºC in Low & Slow set up, smoking with White Oak chunks. Remove the ham from the briner and let it drain well and then apply the rub. As you will see later you will not be hard at all to get a nice crunchy bark. I therefore advise against using a very sugary rub that help in this sense, but to limit yourself to our flavorizer par excellence: our Rub101. 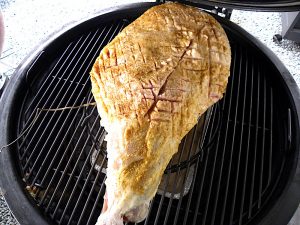 Place a probe in the pulp in the corresponding position of inside part of the leg and place the ham on the grill. Wait until 74° C internal, then remove from cooking, let stand for a few minutes and slice starting from the outside part of the leg. In our case we arrived cooking in about 5 hours. 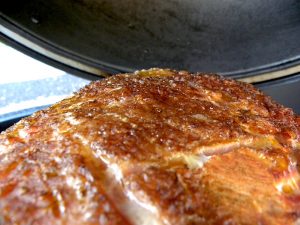 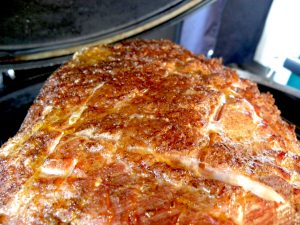 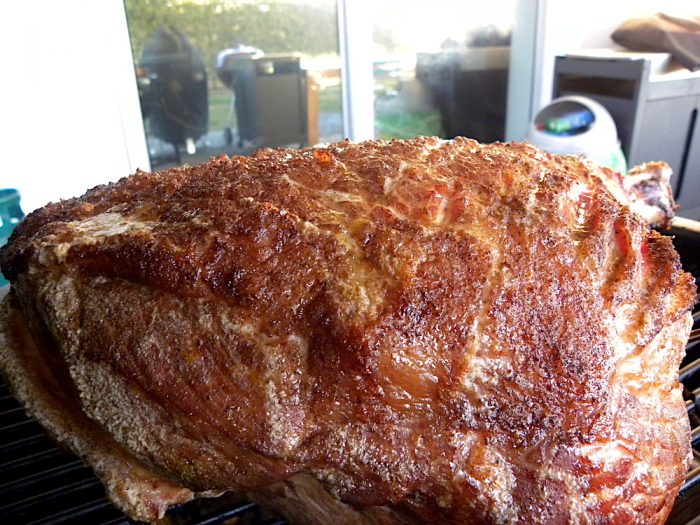 The ham is simply wonderful. On the surface there is a crunchy and delicious crust with a scent that is really difficult to describe in words. The slices are of a perfectly homogeneous pink, with a slightly more compact consistency compared to the classic supermarket ham but with an extremely juicy and tender meat. The system of resting in boiling water worked very well and despite the 14 days in brine the ham had no excess of sapidity even being intensely tasty. 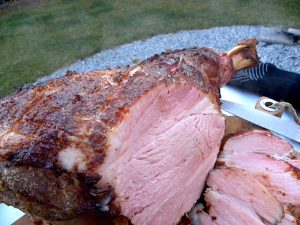 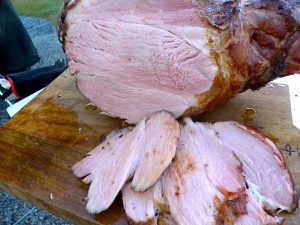 What to say? I felt the needing of lighting the fireplace, pouring a beer in the ceramic mug and going back to reading Asterix, of course while eating some slices of smoked ham. Don’t you?

An Alternative Way to Eat a Steak Probably the purists, those of…