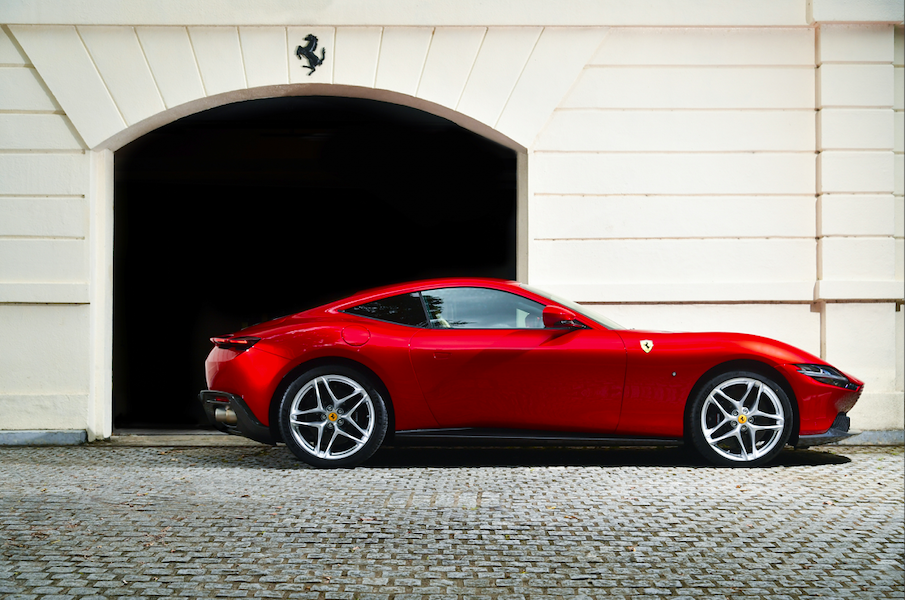 Entry-level though it may be, the Roma grand tourer is not only the most beautiful Ferrari in years, but also an accomplished and thoroughly civilised motor car.

If Ferrari hasn’t made a truly beautiful motor car for quite some time, that’s possibly because the famed Italian marque’s quest for dynamic excellence sometimes outweighs the need for design and stylistic purity. In other words, when you’re building fast automobiles, handsome does will often trump handsome is.

Indeed, to find the most beautiful Ferraris ever, you’d probably have to go back a long way, as far even as the 1960s and early ’70s, a time when the coachbuilder’s eye and art took precedence over the science of aerodynamics. I’m thinking particularly of the ’64 275 GTB, the 250 GT Berlinetta Lusso of ’62, the ’67 Dino GT and, a personal favourite, the petite and utterly delightful 250 GT Berlinetta SWB of 1959, which to my eyes is one of the prettiest sports cars of the past 75 years (it’s no coincidence, either, that three of those four have engines at the front, a configuration that Enzo himself is known to have preferred).

I also suspect that the company’s current design director, the estimable Flavio Manzoni, feels much the same way, because as inspiration for Ferrari’s recent luxury GT coupe, the Roma, he turned to the ’50s and ’60s and came up with a stunning 21st-century reinterpretation of everything that made Italian style and design of the period so glamorous.

With a front-engine layout that’s based on the platform of the Portofino hardtop-convertible, the Roma not only represents a welcome return to the company’s road-car beginnings, but is also the most classically elegant automobile to wear the cavallino rampante badge in ages. It’s a gorgeously curvaceous and perfectly proportioned creature whose long bonnet extends rearwards from a sharply pointed nose towards sinuous haunches that taper into an exquisitely realised tail. And though the front light clusters, grille and splitter might not immediately align with everyone’s taste, the gently arced surfaces and attention to detail throughout the exterior are outstanding – I’m particularly taken by the neat rear lights that blend seamlessly into the tail spoiler’s razor edge.

Of course, the name Roma conjures up more than merely the Eternal City. Here it comes freighted with a plethora of references that evoke Italy’s rebirth following the Second World War, and especially a cinematic golden age typified by Fellini’s masterpiece La Dolce Vita. Thus, Ferrari couldn’t resist the marketing tagline “La Nuova Dolce Vita”, conveniently ignoring the irony implicit in the movie’s title and the fact that its protagonist’s search for love and happiness was anything but sweet. No matter: were the film’s stars Marcello Mastroianni and Anita Ekberg still around today, we could easily imagine them stepping into a Roma after a day’s shooting at Cinecittà. It’s a car with genuine star quality, a charisma that belies its entry-level position in the Ferrari model range.

Central to the Roma’s marketing brief is the need to entice into the company’s fold buyers who, perhaps because they considered them too hardcore and extreme,had never previously considered parking a Ferrari in their garage. We’ve heard that same objective applied to Californias and the current Portofino, but this new GT really does seem to have what it takes to fulfil it.

Naturally, with a 3.9-litre twin turbocharged V8 nestled beneath its sweeping bonnet – an engine that produces 612bhp and can rev to a frenetic 7,500rpm redline – the Roma can be very fast indeed, though more timid newcomers to the brand will be relieved to learn it never quite delivers supercar levels of insanity. More to the point is that Maranello’s excellent V8, which has scooped up more Engine of the Year awards than Meryl Streep has Oscars, is an extraordinarily smart and flexible unit, equally happy to pussyfoot gently around the city as it is to rampage along the fast lane of the freeway.

Similarly aimed at attracting this new customer base is the entirely new interior architecture that confidently advances Ferrari towards territories of luxury and style currently occupied by Astons, Bentleys and posher Mercedes. Each person in the front sits in their own swept- sided cocoon, which, along with a small passenger-side dashboard display, helps peddle the agreeable fantasy that both are involved in the driving process. Better still, they’re enveloped in swathes of deeply aromatic Poltrona Frau leather on seats that could hardly be comfier.

The move to an all-glass cockpit, however, while superficially impressive, is somewhat less successful. The main display is par for the course and, on the face of it, the 8.4-inch, portrait-format central display ranks as an improvement over the smaller screens fitted to other current Fezzas. But things start getting weird with the virtual engine-on “button”, the mirror-adjustment touchpad, the electronic door openers and a range of touchscreen-operated controls that, aside from being fiddly and unintuitive, serve as uncomfortable reminders of Murphy’s Law – what could possibly go wrong? Fortunately, there are no such concerns about the physical dimensions of this 2+2 cabin. Though the pair of seats in the back should be viewed as occasional in the extreme, that also means plenty of rear storage space when travelling one- or two-up.

Much as the Roma shares a good deal of the Portofino’s basic underpinnings, drivetrain and layout, it drives as if it’s a substantially different car. It’s almost 100kg lighter – no surprise when you consider there’s no roof mechanism to lug about – and with a 20bhp horsepower increment there’s a distinct impression that the Roma is the nimbler of the two. Moreover, the addition of a new, super intelligent eight-speed dual-clutch gearbox (mounted at the rear axle for optimum weight distribution) that also promises faster shifting almost renders the steering wheel-mounted, drive-mode-switching manettino toggle redundant, so cleverly does the transmission work in concert with the engine. When automatic sport mode is selected, for example, it simulates double-de-clutching at the drop of a hat, flipping up and down through the ratios, grossly flattering one’s driving abilities and making glorious noises into the bargain. The transmission selector is even designed to resemble the manual gates of Ferraris of yore, a nice, if purely cosmetic, retro touch.

Throttle response on the turbo V8is beyond outstanding – there’s no hint of lag from this engine whatsoever – and even with relatively mild throttle inputs the acceleration is addictive. Ferrari claims a 0-100km/h sprint in 3.4 seconds (a time that if anything seems conservative) and a maximum speed in the area of 320; in old-money terms, that’s a shade short of a genuine 200mph.

As for the steering and handling, both are impeccable. The small helm is direct, quick and delivers plenty of feel, while the chassis is fettled with so many brilliant driver- assist systems – which, like the gearbox, tend to perform their ministrations unobtrusively – that the car can be hustled along at a very rapid clip indeed without inducing any great drama. This is an easy car to drive quickly, and in surprising comfort too.

It may have taken two generations of Californias plus the current Portofino to get to this point, but, at long last and by using a roughly similar list of ingredients, Ferrari has come up with a road car that eschews extremes while nudging perfection at almost every level. Thoroughly modern while being deeply traditional, the Roma isn’t just the genuine article that the late commendatore would have been happy to put his name to, but after years of pursuing supercar superlatives – an exercise, one sometimes feels, that could end up by disappearing up its own whatsit – this restrained and classy automobile could even be the Ferrari we’ve all been waiting for. Accessible and yet deeply exciting, exquisite to look at and a dream to drive, it’s the real deal.

The post The Ferrari Roma: A Stunning 21st-century Reinterpretation of Italian Style and Design of the Period appeared first on Prestige Online – Singapore.