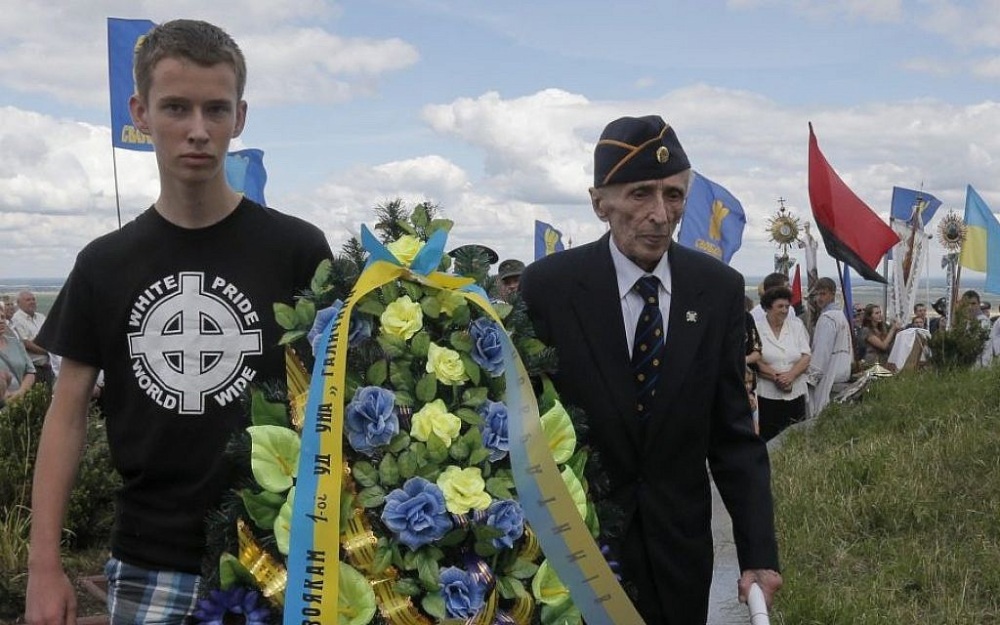 Sadism is a marked feature of racist fascism, or “nazism,” and it’s proudly displayed in today’s Ukraine, such as in this string of cellphone videos. It was posted as a string of tweets during March 20-22 by a “Juan Sinmiedo”, whose account then became “suspended” by Twitter, because it was publicly exposing truths about Ukraine that mega-corporate America assiduously suppresses U.S.-and-allied publics from knowing. The tweets by Sinmiedo (probably a pseudonym in order to reduce the likelihood of his being imprisoned or even killed by government-agents) introduced them (as is shown in the archived copies that had been made of the string, and which are linked-to here, including some of his individual tweets here) by saying “Hundreds of civilians have been punished for diverse reasons in Ukraine by paramilitary groups and National guard. Strong footage. Tortures, abuses, humiliation, even of kids and girls.” Displayed there are painful humiliation rituals that treat victims as if they’re meat — animals that the perpetrators believe have no other value than their flesh (to whip or otherwise). These victims are “Untermenschen” (sub-humans), in the perpetrators’ view.

Thread. Hundreds of civilians have been punished for diverse reasons in Ukraine by paramilitary groups and National guard. Strong footage. Tortures, abuses, humiliation, even of kids and girls. There is no[t] a clear motive for this [these] illegal abuses. They [the victims] are labelled as marauders. That can include men who don’t want to fight, who are suspected of russian sympathy, looters or people searching for food.

Latest news, Zelensky it’s [is] a LGBTQ phobic [person], his party[’s] past legislation [were] targeting “homosexual and transgenderist propaganda” and [targeted] against gay marriage or adoption. It’s [Its] social politics regarding LGBTQ are a copy of Putin’s says [a] US think thank report. [t is] Targeting of “homosexual propaganda” by Zelensky.

The media keep lying about Mariupol Theatre after the Kiev government have already said there is no victims, as with the mosque, as with the missiles over the nuclear plant. All fake. But his testimony of a Mariupol resident is real. More testimony about the barbarities of Azov Battalion in Mariupol. Azov are nazis don’t let the media fool you.

The Azov Battalion are Ukraine’s elite nazi military forces, like Hitler’s SS were, and are trained and armed by the U.S. Government, including the CIA. This Battalion lead the rest of the Ukrainian Government’s forces that had been, ever since 2014, shelling the breakaway Donbass region and trying to kill as many people as possible there, but were being restrained by the EU so that Ukraine would meet the rules to become acceptable to join the EU. Such flagrant nazism is unacceptable to the EU, though the U.S. basically hires such nazis to do its work in Ukraine, because Ukraine’s nazis hate Russians with a passion and are delighted even to risk their own lives in order to kill Russians — killing Russians has been their specialty ever since at least the 1930s. In fact, at least some of Ukraine’s soldiers are taking joy in torturing to death captured pro-Russia Donbass residents. That’s sheer sadism.

Another current example of the acceptance (and even encouragement) of nazis in today’s Ukraine was introduced to Western publics on March 21st by Patrice Greanville’s Greanville Post website, under the heading “Meet Ukraine’s Azov Figurehead Olena Semenyaka, Europe’s Female Führer”, an article by Adrien Nonjon, who is a Ph.D candidate in History at the Sorbonne in Paris. His article there links to a fascinating 14-page article that he had done for The George Washington University, in which Semenyaka’s meteoric rise to leadership positions not only within Ukraine but within the broader European nazi movement is described, analyzed, and placed into its historical context going back to the 1930s, and even earlier. That latter article closes by saying that “Semenyaka has enabled the Azov movement to consolidate and diversify its ideological apparatus but also to strengthen its influence abroad — an ideological mutation on a rare scale observed for the very first time in the history of the Ukrainian far right.” I had earlier written about the founder and leader of the Azov Battalion, Andrei Biletsky, and his adoption of Hitler’s advocacy of “Deutschland über alles” transformed to something like a “Ukraina über alles”, which is Biletsky’s “Great Ukraine” instead of Hitler’s “Third Reich,” so that, as Biletsky put it, “Social Nationalism raises to shield all old Ukrainian Aryan values forgotten in modern society. Only [by means of] their recovery and implementation by a group of fanatical fighters can we lead to the final victory of European civilization in the world struggle.” It would be Ukraine instead of Germany that would serve as such a hero-nation. Here is a brief propaganda video for Semenyaka. This is the force that today’s American leadership hired (along with hiring Ukraine’s two overtly nazi political parties) to lead the new Ukraine, and Semenyaka has become the Azov Battalion’s chief ideologist. She has rooted Biletsky’s movement in so many European philosophers, so that it is a coming-together of White-Supremacist thinking that will have some appeal throughout the EU, not only in Ukraine. This will help America’s leaders to keep the EU’s leaders under control (like Nuland famously said, “Fuck the EU”), because if the overtly nazi faction are ultimately to replace today’s (less-boldly nazi) EU leaders, then there will be no effective resistance remaining against allowing Ukraine into the EU and into NATO, and consequent placement of America’s nukes only a 7-minute flight-time away from hitting Moscow.

America’s leaders were very cunning to hire the Azov Battalion (and other Ukrainian nazi organizations) to carry out their plan against Russia, because — unlike Germany’s nazism, which was obsessive against Jews — Ukraine’s nazis are obsessive against Russians (and now lead the military forces in the nation that borders the very closest of any nation targeting Moscow). It’s much cheaper to use Ukrainian soldiers than to use America soldiers, to wage this phase of America’s long war to conquer Russia. And, so, during June 2011 through February 2014, Obama grabbed Ukraine in a very bloody coup. Then he had his stooge regime there kill as many of the pro-Russian voters as they could, especially in Donbass, which had voted 90% for the democratically elected Ukrainian President whom Obama had overthrown.

When Ukraine’s President Zelensky was asked (March 20th) by CNN’s Fareed Zakaria about Russia’s allegations that Ukraine’s government is “Nazi,” Zelensky mocked the very idea, because he himself is Jewish and because “The Nazi regime occupied the entire territory of Ukraine and Ukraine fought against Nazis” (but Russia supposedly didn’t). However, in actual historical fact, the ONLY region of the Soviet Union that largely supported the Nazis was western Ukraine (around Lviv), no part of Russia (where the Nazis were overwhelmingly loathed). Zakaria failed to call out any of Zelensky’s blatant lies. Of course, that’s normal for ‘news’-media in The West. (And here can be found many of the truths that they likewise lie about to cover-up regarding the U.S.-and-allied imperialistic regime’s hiring and arming of Sunni-Islamic jihadist groups in order to overthrow and replace pro-Russian and pro-Iranian governments in the Middle East — the U.S. regime’s regime-change operations in a different part of the world, but for the same end, which is U.S. global control.)

By coincidence, Ukraine’s parliament posted, shortly after that Zelensky interview, a tweet by them which alleged that Russia’s bombing of today’s Ukraine is evil just like U.S.-and-allied bombing of Nazi Germany was evil, and that therefore today’s Western countries should establish a no-fly-zone over Ukraine to shoot down Russian planes there (though doing that would cause WW III). Web-posts immediately noted that for Ukraine’s parliament to say this proves that Ukraine (or at least its government) self-identifies with Nazi Germany and is therefore just like Russia is alleging Ukraine’s government to be; and, consequently, that embarrassing tweet was quickly removed. Fortunately, however, it had already been Web-archived, such as here. So, anyone who now says that Ukraine’s government isn’t nazi is contradicting what Ukraine’s parliament had said and displayed about itself. (Of course, there’s plenty more evidence of that government’s nazism, such as this.)

Putin stated as one of his top, if not absolutely top, objectives in his “Special Operation” in Ukraine, was to “denazify” it. (And that demand from him is the roadblock that terminated the negotiations: Zelensky is unalterably opposed to doing that.) But, in order for Putin to do it, he would first need to denazify America itself, because the nazis in Ukraine serve America’s billionaires, who effectively own America’s government — not necessarily the billionaires who own Ukraine’s government (who likewise contribute funding to the Azov Battalion and other nazi organizations). Putin’s — and Russia’s — only options now are therefore either, on the one hand, to conquer and retain for a number of years control over at least what had been the pro-Russian part of Ukraine (Ukraine’s southeast), in which case there will be a long-term possibility that America will become defeated; or else, on the other hand, for Russia itself to be defeated — swallowed up by the billionaires who control America and its vassal nations. (The third possibility would be WW III, which would be Russia-v.-America nuclear war, which would be the entire world, especially those two countries, being defeated — destroyed far worse than any country ever has been.) Those are the options. This is what has resulted, so far, from the operation (the “Cold War”) that U.S. President Harry S. Truman started on 25 July 1945, and that U.S. President G.H.W. Bush decided to continue on 24 February 1990 — and that therefore continues even today.

Here (starting at 5:00 in the video) is a stunning report and analysis, from someone whom I have always found to be an extremely reliably truthful reporter and analyst, Alexander Mercouris, regarding the actual current situation (as-of March 27th), in the war between Russia and Ukraine (Ukraine being currently the main battlefield in the now 77-year-long war by the U.S. regime to conquer Russia).

What is said here is NOT an endorsement of Russia’s Government, but instead a condemnation of my own country’s Government, the imperial USA regime. For example, on March 28th, the New York Times, which routinely deceives the public (especially about foreign nations that the U.S. regime aims to conquer), headlined “Zelensky Gives Interview to Russian Journalists. Moscow Orders It Quashed.”, and I fully share the opposition that they expressed there to Russia’s censorship, but I go much further: I condemn censorship of any sort, by either a government (such as such media-shills do) or by a ‘news’-medium itself that (like that newspaper always does) is shilling for its own government’s regime. Just because one side in a conflict is profoundly evil (such as the U.S. Government has been ever since 1945) does not necessarily mean that the other side in that conflict is necessarily good. The assumption to the contrary (that one side must be good because the other side is so horrifically bad) is the basis of all propaganda. Internally within the U.S., that same false assumption ‘justifies’ each political Party by the other Party’s scudziness. Democracy and censorship simply cannot coexist. (The U.S. itself is permeated with censorship.) But the basic reality is that imperialism — especially of a type like America’s that aims to control the whole world — is so evil that it must be crushed, entirely ended. For me, that is the bottom line.

Reposts are welcomed with the reference to ORIENTAL REVIEW.