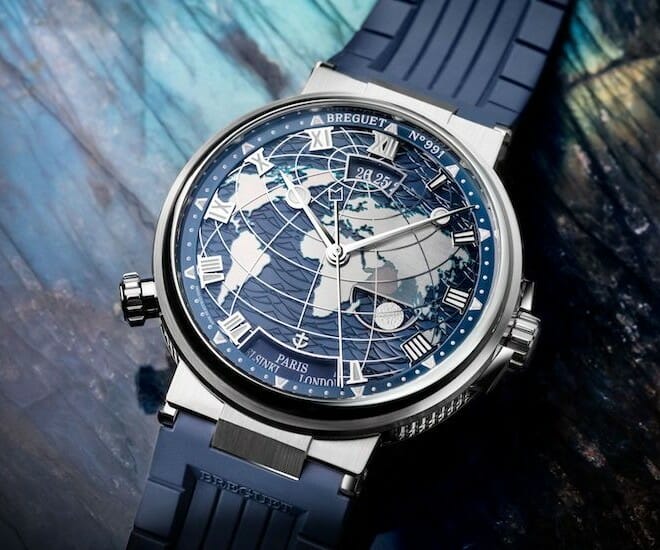 On the cusp of Watches & Wonders 2022, Breguet (politely, as we would imagine) threw down the gauntlet to its esteemed horological counterparts for the GMT watch of 2022 with the release of the Breguet Marine Hora Mundi 5557. Having decided to revamp the Marine collection five years ago, the Marine Hora Mundi 5557 joins the likes of the time-only Marine 5517, Marine Chronographe 5527, and Alarme Musicale 5547 that were released in 2018. This introduction will not only see Breguet’s vision for the sporty outlier slowly coming to fruition but also allay lingering fears as many thought the initial move was a huge gamble by Breguet.

While the Hora Mundi is not entirely new to Breguet (having made its first appearance in the Classique Hora Mundi 5717 in 2011), this new piece signals its maiden foray into the Marine collection. In a nutshell, the Marine Hora Mundi 5557 allows the owner to cycle between the current and a preset time zone on demand. At the heart of the self-winding calibre 77F1 lies an instant-change dual-time display with a mechanical memory wheel responsible for this snappy action.

An additional module with programmable and reprogrammable mechanical memory wheels accounts for the time differences between the various cities. Actuating the pusher at seven o’clock changes not only the time but also the retrograde date and day/night indicator without interrupting the basic timekeeping mechanism. Kudos to Breguet for gatekeeping this bit of innovation as four patents were previously filed to ensure this is a well-guarded secret. While no details about the module were disclosed, we will not be surprised silicon components are in play given they have excellent shape retention and do not require lubrication.

Though much of the calibre remains relatively untouched since the Classique Hora Mundi 5717, the aesthetics have been reinterpreted to match the sporting elegance of the Marine collection. Many will be thrilled to know that water resistance has been vastly improved as well. Inspired by Abraham-Louis Breguet’s ties with the French Navy which began in 1814, a world map set against the seven seas serves as the dial for the Marine Hora Mundi 5557. The base layer is crafted from gold, with the wave motifs first hand-guillochéd being adorned with a shade of abyssal blue. A sapphire plate is later superimposed, depicting the meridians, parallels and continents with a turquoise outline representing the coastlines.

Beyond the masterful dial, creation lies intricacies waiting to be discovered. The continent plates feature subtle horizontal brushing while the photorealistic renditions of the sun and moon are hand-hammered before being set in rose-gold and rhodium respectively. A “u-shape” hand indicating the date at 12 o’clock is finished with brouillage — an updated ancient watchmaking decoration that creates a matte yet shiny effect. True to the Marine collection is the luminous Breguet handset and Roman numerals set on the flange supporting the various dial elements. All of these are set in either a 43.9mm white or rose gold case with the emblematic case side decors and paired with either a leather strap, rubber strap or gold bracelet.

The post The Breguet Marine Hora Mundi 5557 Thrills With Its Ingenious Complication appeared first on LUXUO.