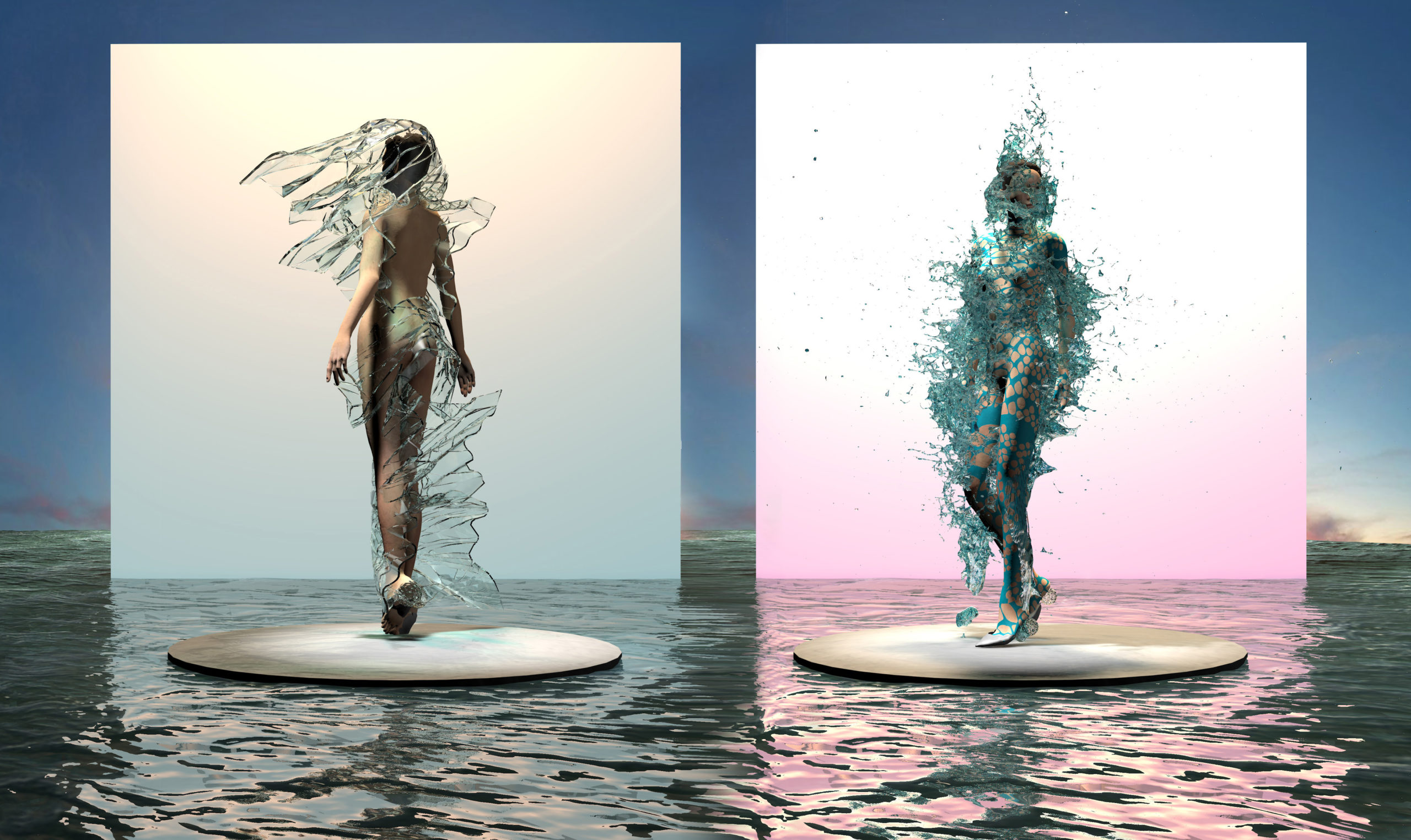 The idea of creating clothes meant for cyberspace has been raising eyebrows in the past two years. To gain insight on the phenomenon, we talk to designers Gala Marija Vrbanic and Scarlett Yang.

In the 1980s, fashion – or at least its glamourous, airbrushed into-oblivion-version – happened largely on the catwalks; raw style, on the other hand, lived in parties, often in the “adult amusement park” setting of New York’s Studio 54. Since the ’90s, however, fashion has increasingly been all about the streets– and especially so after style sirens began migrating to social media.

Now, it seems as if casual fashion observers (aka anyone unfortunate enough to own an Instagram account) find themselves on the precipice of change – one that involves no physicality whatsoever. To help guide you through this bright new world that seems to be just around the corner, I spoke to digital-fashion pioneers Gala Marija Vrbanic and Scarlett Yang.

Vrbanic founded Tribute Brand in 2020, shortly after graduating from the University of Zagreb with a degree in visual communications. Her love for fashion was, ina way, genetic, “My mom is a fashion designer, so I’ve been surrounded by fashion all my life,” she says, though her decision to make digital fashion the focus of her brand was inspired by the gaming culture. “Five years ago, I stumbled upon this software used for fashion brands, so that they don’t have to produce physical prototypes. Then I realised we can use this softwarefor something else, not just physical fashion. We can make crazy things.”

Within two days of the first images of Vrbanic’s Trone-esque dresses showing up on Instagram, Tribute Brand had become a sensation in fashion circles. “On the second day, we were in Vogue Business,” Vrbanic recalls. “This thing doesn’t happen to a physical fashion brand.” Less than two years later, its patrons include Argentine singer Nathy Peluso, South Korean rapper CL and designer Nicola Formichetti.

Alexander McQueen was the influence that pushed Scarlett Yang into fashion. While studying at Central Saint Martins, Yang discovered her fascination with biomaterials and, at the same time, “gaming, anime and cosplay”, and began using 3D software, which was often employed in character design, to create digital garments. In 2020, Yang debuted a hybrid dress that included a physical piece, made from algae extract and silk cocoon biowaste, and a digital 3D skin. “If you look up-close, the model is wearing a physical piece, and there’s some part of it that’s 3D imposed on top, because the biomaterial was dissolving while we were shooting,” Yang explains. The project, which was titled “Decomposition of Materiality and Identities”, won the LVMH Maison/0 Green Trial 2020 prize.

Design workflows are like fingerprints – none are identical. Philipp Plein, for example, neither sews and nor, allegedly, does he make sketches for his clothes; while London-based designer David Koma once hadto sit in at mortuary autopsies to learn how to make the perfect bodysuit. Digital fashion is no different. For Vrbanic, the design processes for digital and physical garments are similar.

“Basically it’s the same,” she says. “Instead of sewing things and doing prototypes in the physical world, we just do everything in front of the screen and start from there.” For Scarlett, given the specifics of her work with physical garments, the digital workfl ow follows a different path. “With the physical garments I used to [make] back in the school, there was a lot of heavy hand-stitching, details, embroidery and crazy sequins,” she explains. “That’s not the case with the digital collections. You have all these algorithms, you can program them, generate these hundreds of thousands, millions of little sequins by just clicking one button. It doesn’t require that many hours, but then there’s a lot of curation and decision-making.”

A conversation about digital fashion without questions concerning wearability is impossible. According to its founder, Tribute Brand positions itself not only as a tool for people to express themselves online but also as a “fashion-tech house”. The online experience of wearinga digital garment that transcends physical constraints in its design was described by one of Vrbanic’s customersas “an instant ego boost”.

“Does social media matter?” she asks herself during our interview. “It matters because this is where we express ourselves now. Before, fashion was happening on the streets. Now, everything is transferred to the virtual space. Social media is the basic step. You have those metaverses, games, levelling everything up.”

Vrbanic needed to ensure her vision of wearability for Tribute Brand’s garments enjoyed sufficient technological backbone. “There’s a lot of technology and software development behind it,” she says. “This is what we’ve created for ourselves, primarily because there weren’t tools like that. We’ve been selling this utility for digital fashion – we call it Tribute Brand Premium Fitting Service – where customers have that garment fi ttedto their photos.” Vrbanic and her team also developeda proprietary AR software that allows customers to wear their garments in real-time, in a video format.

In 2021, Tribute Brand made waves with its collaboration with Carolina Herrera. Vrbanic and her team developed a digital version of a dress from the latter’s spring/summer 2022 collection, which garnered the attention of singers Kim Petras and Charli XCX. “We collaborated with Wes Gordon creatively, but I’m happy he gave us a lot of creative freedom. If you see the physical dress and the digital dress, they’re different. It’s just the idea that’s connecting them,” recalls Vrbanic. Today, anyone can wear the digital dress by simply downloading the Herrera x Tribute app. The AR software enables the wearer to take videos or picturesof themselves in the dress.

“It’s very inclusive,” says Vrbanic. “Everyone can have it, but it’s also a question of, ‘If you want to be a luxury fashion brand, can everyone have it?’ This is where the NFTs come in: you can be the owner, but other people can wear it.” Given concerns surrounding the sustainability of the trading experience of the digital assets, it would be prudent to make a distinction between these NFT garments and the sea of monkey pictures, which are sufficiently distinct to have some claims of “uniqueness” but identical enough in their templates to be mass-produced on a metaphorical conveyor. “We didn’t come into this space as a tech company, but as a fashion brand,” says Vrbanic of Tribute Brand’s NFT collection in collaboration with digital fashion house The Fabricant, “[Our first drop] was very conceptual, it was one physical piece, and the other one was an AR skin that buyers also received when they bought an NFT.” After buying the asset, the customers received an app that enabled them to wear it digitally. “For us, NFTis just a protocol – we don’t want to be a brand that’s known for producing them,” she adds, “It’s not only about having a nicely 360-degree rotating garmentas an NFT. Fashion is meant to be used.”

“The words of 2022 are metaverse and interoperability,” says Vrbanic. The metaverse– according to the way it’s presented in mainstream media – is a concept of an “infinite” digital space, where people can collaborate and interact through 3D avatars. It’s unclear, however, how far away from that idyllic cyber world we are in reality.

“It’s still a buzzword,” says Vrbanic. “If you take Decentron, for example, it’s a great space, but it’s only currently being built. It’s a huge construction site. In 10 years, I think it will eventually be developed.” There are hundreds of different metaverses being created by various providers already, from Mark Zuckerberg’s Meta to Sandbox. This creates a dilemma. Can a digital garment be developed to be worn across all the metaverses? Or, in other words, can it be interoperable? “Everyone in this industry at this point is working towards this goal,” says Vrbanic, “The go-to process would be: you buy a dress based on an NFT protocol, then you have it on your phone and you choose to send it to a particular metaverse. One integrated wardrobe. Something like this still isn’t possible.”

Over the past couple of months, social-media dwellers have found themselves being bombarded with gigabytes of mediocre pictures of monkeys and cats under the guise of “unique artworks”. Phenomena such as this result from a complete absence of curation in the emerging “art” movement. To Yang, curation in digital spaces is key.

“You can hire an expert who knows everything about 3D and coding, but to have a unique outcome, you’ll need some work on the curation to [put] these elements together,” she says. Vrbanic approaches the topic similarly: “It’s very important to have people [in these digital spaces], not because they’re friends with someone, but because they’re educated and know how to curate things. It has to be there – otherwise, it wouldn’t make sense. You see all of the things that aren’t good. It has to be inclusive and exclusive at the same time.”