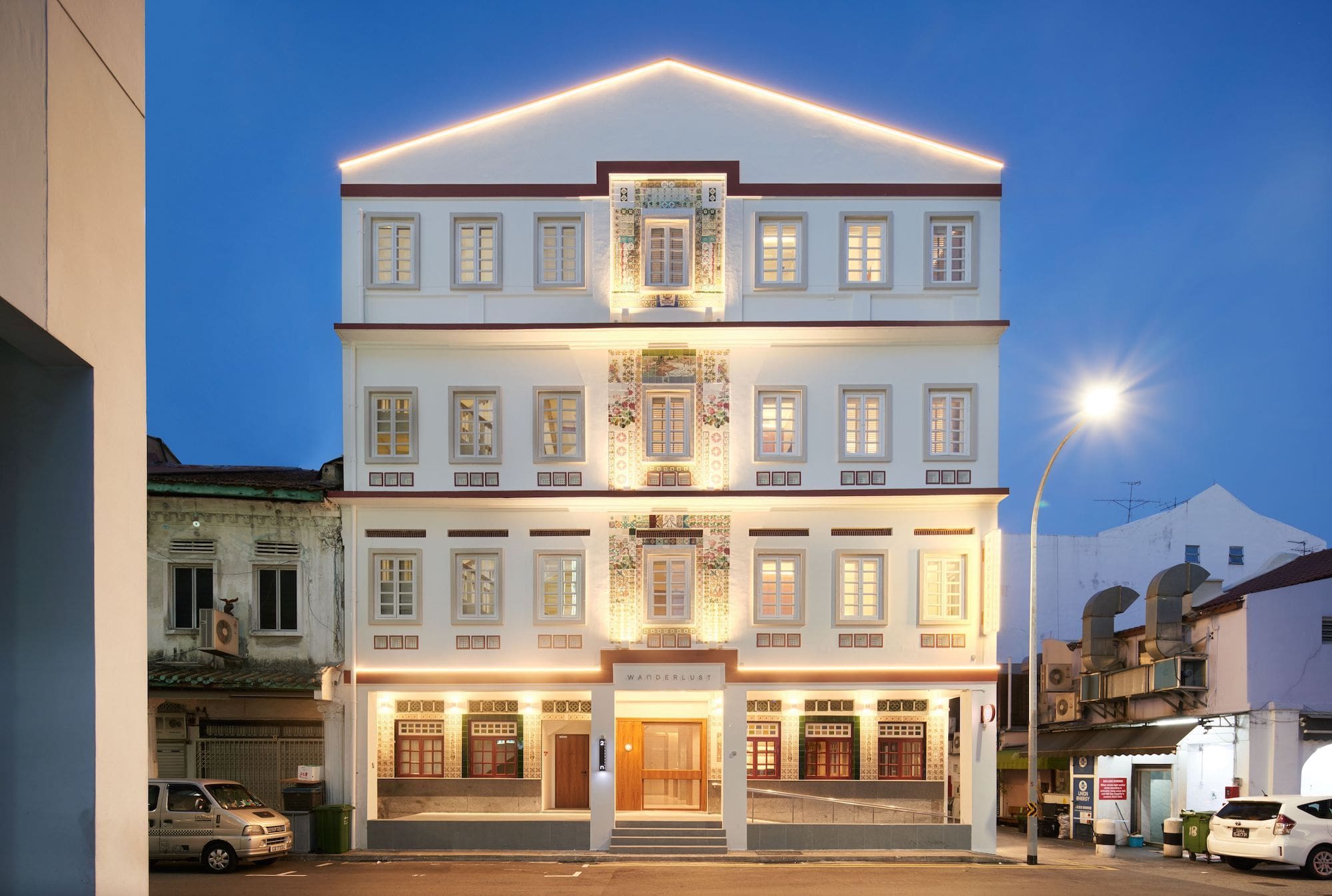 Amidst the countless high-rise buildings that tower over the city, the few heritage buildings and shophouses we have left add a touch of eclecticism to the architectural landscape in Singapore. These rare gems are not only nostalgic but also possess an inimitable charm, especially palpable when you’re staying in one.

The Unlimited Collection by Oakwood is a newly launched brand managing three iconic heritage properties in Singapore owned by 8M Real Estate: Wanderlust, Kesa House and Ann Siang House. Maintaining the character of each unique building, the properties under the brand appeal to both discerning property owners and guests and who are after new experiences.

Kesa House, Ann Siang House and Wanderlust are all located in architectural conservation precincts, which are just a stone’s throw away from the commercial and business districts but still removed enough to be a sanctuary for those preferring to immerse in the storied, dynamic neighbourhoods of Chinatown and Little India.

As of now, Ann Siang House is not receiving guests just yet but Wanderlust and Kesa House have just opened in March. We spent a weekend staycation at the two properties, catching respite from the humdrum routine and bustle of city life. 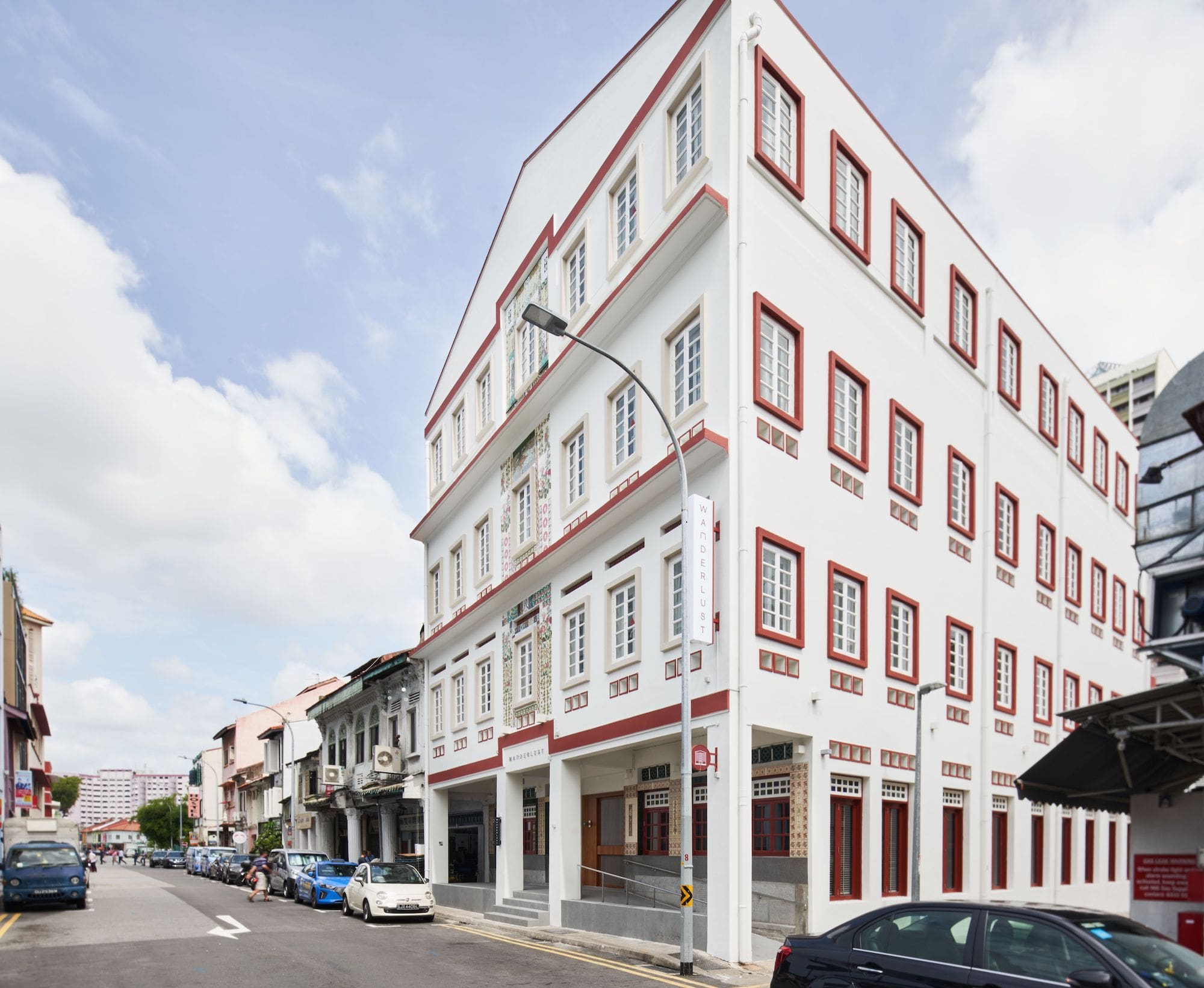 Pulling up to the Wanderlust is quite simply breathtaking. Sitting on a quiet street along the Little India Conservation Area, the four-storey 1920s Art Deco style building appears right at home among the rows of shophouses but sits a bit taller and larger, with a quaint and almost whimsical façade that looks like something out of a fairy tale. The heritage building was once the Hong Wen School, and now stands out from its neighbouring two-storey shophouses with its symmetrical frontage decorated with beautifully painted ceramic tiles and stained glass windows – just some of the original architectural elements that have been restored.

While reworking and restoring the property, the interior design team worked around Wanderlust’s original structural grid to create a roof deck jacuzzi, a restaurant, as well as 29 rooms and suites with simple, purposeful layouts. Room sizes range from 13 to 25 square meters and are classified into three types, with Deluxe rooms being the smallest, followed by Studio Premier and then Studio Loft. While the rooms are generally more modestly sized, they are thoughtfully designed to maximise the area.

We stayed in the Studio Loft, which, thanks to its location on the fourth storey under the pitched roof, allows for more head room. Taking advantage of the higher ceilings, the bed here is up on a loft, creating two separate levels and the feeling of a larger space. The lower level encompasses the living area, bathroom and a kitchenette ideal for longer-stay guests. We appreciated the eco-friendliness and convenience of having a filter that dispenses drinking water in the room, as well as a Nordaq tap in the hotel’s common area on the second storey for still and sparkling water

There is no shortage of food options in the vicinity, especially with 24-hour prata eateries and dim sum joints aplenty. But one of the top spots to dine while you’re here at is located right within Wanderlust: Kotuwa. Since it opened last December, chef Rishi Naleendra’s Sri Lankan restaurant has been highly raved about and consistently booked out months in advance. Upon check-in at noon, we decided to try our luck for a table that same evening and Kotuwa’s head bartender Ash pulled through.

Dinner was spectacular – highlights included the Wambatu Moju (Sri Lankan spiced eggplant pickled in coconut vinegar), egg hoppers (commonly known as appam in Singapore), lamb curry and black pepper Kithul pork (crispy pork belly with black pepper kithul caramel and guindilla pepper) – and the cocktails were just as impressive. There are just six drinks on the list but each comprises Sri Lankan flavours and some even have native arracks. We loved the Yal Devi, a deliciously spicy concoction of tequila, green chilli, tamarind, cointreau and citrus.

Guests staying at any of the three properties under The Unlimited Collection by Oakwood have access to curated experiences, which they can book ahead of their stay through the hotel. These include a heritage food trail by local tour operator Singabites, a leathercraft workshop conducted by homegrown brand Crafune and a kombucha workshop by Singaporean brewers Le Vyr.

We tried our hand at crafting a leather coin pouch under the guidance of founder Raymond at his Crafune studio in Haji Lane, which is a scenic 10min walk from Wanderlust. The class was easy to follow along and in just an hour we learnt how to score and cut leather, how to finish the edges, attach clasps and buttons and more. Holding the finished product in our hands was incredibly satisfying and as a reward for our hard work, we decided to go a few doors down to Ah Sam Cold Drink Stall for beers and locally and regionally-inspired cocktails like the Pandan Daiquiri.

The next day, we also took part in the kombucha workshop, held in the Wanderlust lobby and hosted by Adele, the founder of Le Vyr. We started off with a Singapore Sling-flavoured welcome kombucha, which is one of Le Vyr’s signature local flavours. Kombucha has several purported benefits such as improved digestion, metabolism and more. All materials were provided and it was both fun and very educational as the affable Adele taught us how to make our own brew, while readily answering the many questions we had at each step of the process. At the end of the session, we took home one jar of first-fermentation kombucha to continue brewing at home and one bottle of second-fermentation kombucha that would be ready to consume in a few days. 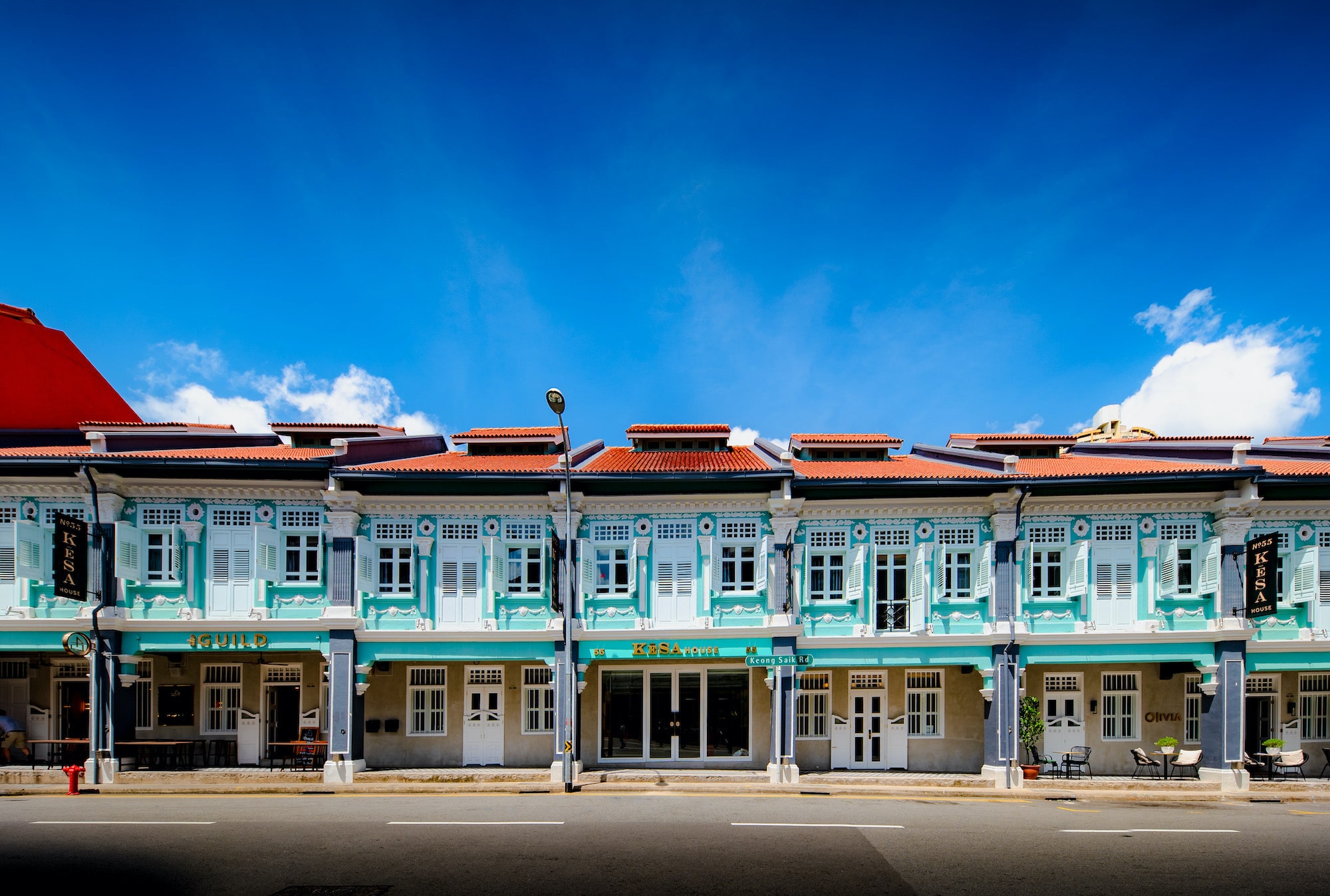 After a seamless checkout at Wanderlust, we mosied over from Little India to charming Chinatown. Right in the heart of Keong Saik Road, it’s hard to miss KēSa House with its eye-catching teal exteriors. The flexible living concept is housed within a row of ten shophouses, and great for both short and extended stays with 60 cleverly constructed rooms with modern, elegantly furnished interiors as well as chic and comfortable communal spaces for guests to mingle, work or unwind.

There are five room classifications ranging from the 13-square meter Standard to the 29-square meter Studio Premier, which we stayed in. The open layout felt luxurious and spacious, with a kitchenette and living space that can be closed off from the bed for more privacy. Some rooms come with a skylight above the bed or a private outdoor terrace.

Other facilities include a complimentary launderette and a well equipped kitchen on the second floor, where Nordaq water is also available. But unless you’re staying for a long period, we would suggest taking full advantage of KēSa House’s optimal location in one of the best culinary havens on the island. We were spoilt for choice, with everything from famous local hawker delights such as char siew rice at Foong Kee Coffee Shop or kaya toast at Tong Ah Eating House to Michelin-starred restaurants like Burnt Ends and award-winning bars like The Old Man and No Sleep Club right at our doorstep.

We love Olivia Restaurant & Lounge, housed in the same building, for its fantastic Catalan fare in a casual yet sophisticated setting, as well as Thevar, located further down the street, for its elevated, modern Indian food. Venture a little further and you’ll be greeted by even more dining options of all cuisines along buzzy Duxton Road and Club Street.

For those that want to immerse the culture of Chinatown, the sights are all easily accessible, such as the Buddha Tooth Relic Temple & Museum, Sri Mariamman Temple, Singapore City Gallery and Chinatown Heritage Centre. If you want to feel like a tourist in your own country and rediscover what the city has to offer, staying in one of The Unlimited Collection by Oakwood properties is a great way to soak up the whole experience.

(All images courtesy of Wanderlust and Kesa House)

Louis Vuitton Makes a Bet in the Sporting World