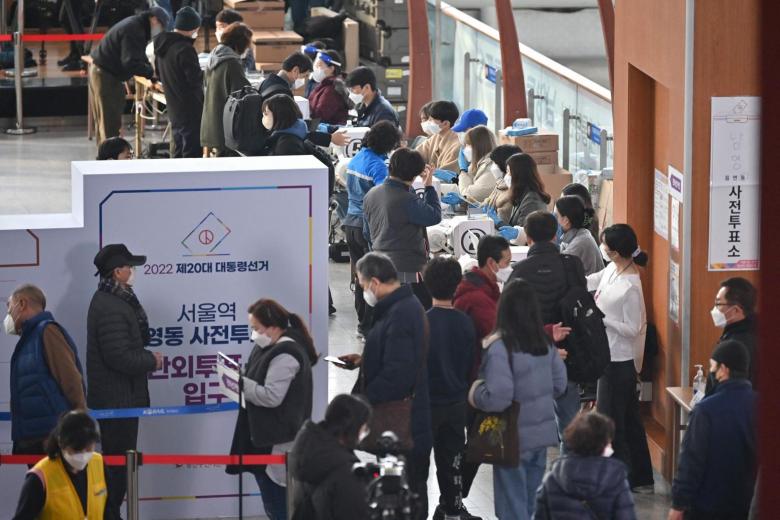 “We are very sorry for causing an inconvenience to the Covid-19 patients during the early-voting period,” the statement said.

It was unknown how many people were involved, but at least one person with Covid-19 had to be hospitalised.

South Korea is experiencing a sharp spike in coronavirus cases, its worst wave of the pandemic.

Lawmakers and health officials had agreed last month to revise election laws to allow voters infected with the virus to cast a ballot in the country’s contentious presidential election.

Under the new rules, the general public could vote early all day Friday and Saturday, but virus patients and those in quarantine were allowed at the polls only during a limited window Saturday.

People with the virus were permitted leave home to vote starting at 5pm and needed to walk, drive or take a cab to a polling station by 6pm.

But having so many show up at the same time caused lines of over an hour at some polls, and in many cases, outside in the cold weather.

More than one million people in South Korea were in in-home treatment for Covid-19 on Saturday, health authorities said.

The nation was reporting an average of more than 208,000 new cases a day, according to the Centre for Systems Science and Engineering at Johns Hopkins University.

According to the election commission, the two-day early-voting period had a 36.93 per cent voter turnout, which was more than 10 percentage points higher than the early-voting turnout in the 2020 parliamentary elections.

On Wednesday, Election Day, the new rules will allow voters with Covid-19 to leave isolation to vote from 6 to 7.30pm, health authorities said.

The rest of the electorate will be able to vote from 6 am to 6 pm as a safety precaution.

Reflecting upon the mishaps during the early voting weekend, the election commission said that it would “come up with measures as soon as possible so that the public can vote with confidence on Election Day”.

In another development related to the pandemic, Hong Kong Post will suspend courier services and parcel deliveries Monday to focus on essential postal services as the city faces a surge in the Omicron variant.

As dozens of residential buildings are locked down for mass testing and increasing numbers of families self-isolate at home, delivery services are facing an increase in demand and a shortage of workers.