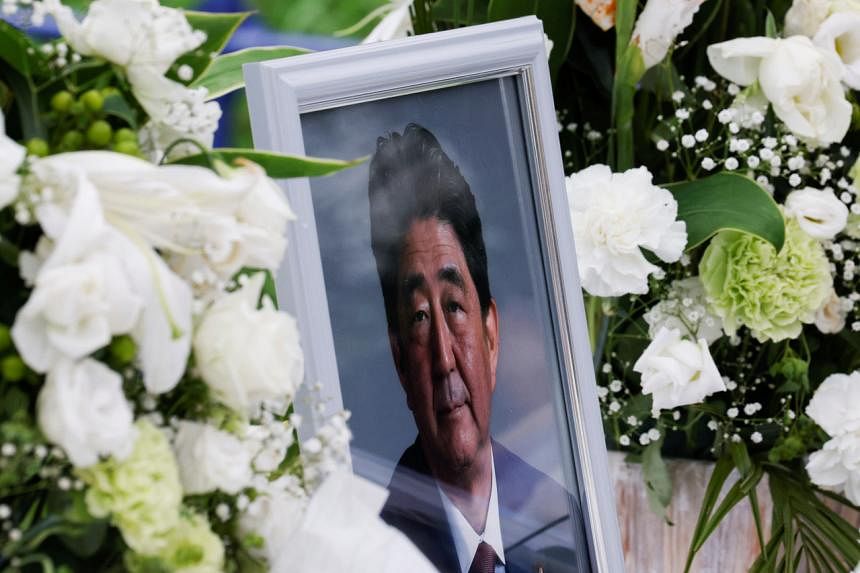 TOKYO – Just as the late Mr Shinzo Abe’s tenure as Japan’s longest-serving prime minister was divisive, a plan to hold a state funeral on September 27 has split the country, two weekend polls have found.

A slim majority of respondents were against the plan, which has stoked small-scale protests.

In a survey by the Nikkei newspaper, 47 per cent were against the state funeral while 43 per cent were in favour. The rest were on the fence.

Another survey by Kyodo News showed 53.3 per cent opposed the state funeral with 45.1 per cent in support.

Japan is extending invitations to foreign dignitaries for the ceremony at the Nippon Budokan arena. This would be the first state funeral since 1967, when one was held in honour of Shigeru Yoshida who led the country after World War II.

A state funeral is fully financed by taxpayers’ money.

Funerals for prime ministers have mostly been jointly paid for by the state and the ruling Liberal Democratic Party (LDP), including one for former prime minister Yasuhiro Nakasone who held office from 1982 to 1987 and died in 2020. The government bore half the cost, or about 96 million yen (S$1 million) at the time.

Prime Minister Fumio Kishida, who was foreign minister and LDP policy chief under Mr Abe, said at a news conference last month that his Cabinet decided a state funeral be held due to the former Premier’s stature as Japan’s longest-serving leader and the diplomatic legacy he has left behind.

LDP secretary-general Toshimitsu Motegi also said last month that he “does not accept” that there are public doubters against the state funeral plan, suggesting that it was an opposition attempt to stoke controversy.

Still, some 61.9 per cent of respondents in the Kyodo poll felt it was necessary to hold a parliamentary debate on the need for a state funeral.

Public opposition has reportedly led the LDP to reconsider a plan to deliver a memorial address for Mr Abe when the Diet convenes for an extraordinary session from Wednesday (Aug 3) to Friday to select a new President and Vice-President for the Upper House after last month’s elections.

The address might be postponed to an autumn session of Parliament, reports said, despite parliamentary tradition for such a speech to be delivered in line with the death of an incumbent Diet member.

During the state funeral for Mr Yoshida, sirens were sounded nationwide to call for a moment of silence, and schools and government agencies were closed in the afternoon.

Chief Cabinet Secretary Hirokazu Matsuno has said that Mr Abe’s state funeral will not be a national holiday, nor will members of the public be asked to observe the mourning.

This is but one of the areas where Mr Kishida has come under pressure just three weeks after leading the LDP to a decisive victory in an Upper House election.

Cabinet support slipped two percentage points in the Nikkei poll from 60 per cent to 58 per cent, the second-lowest reading in the survey since Mr Kishida took office in October last year.

But approval sagged 12.2 points in the Kyodo poll from 63.2 per cent to 51 per cent, which is Mr Kishida’s lowest-ever rating in the survey.

“It is possible that the government’s decision to hold a state funeral, which has been criticised for lacking explanations, may have led to the sudden drop in approval ratings,” said Kyodo’s analysis of the survey.

Another potential reason for the slipping support, said the Nikkei, was disquiet over emerging ties among LDP politicians and the Unification Church, known officially as the Family Federation for World Peace and Unification, that has been described as a “cult” in several countries.

“Any mishandling of the controversy could lead to a further decline in support,” the Nikkei analysis said.

Tetsuya Yamagami, 41, has told police that he shot Mr Abe at a campaign rally in Nara on July 8 because he believed the former PM was associated with the church, having watched a video message that he gave to a sister organisation.

Yamagami has blamed the Unification Church for coercing donations to the point of bankrupting his mother and wrecking his family.

“It is the onus of each and every politician to humbly and honestly explain their ties to an organisation that has been the root of social problems,” Mr Kishida told reporters on Sunday.

The PM’s comments came just days after Mr Tatsuo Fukuda, who chairs the LDP’s decision-making General Council, said that he “cannot see what the fuss is about” when asked if the party would probe ties between individuals and the group.

Mr Fukuda, the son of former PM Yasuo Fukuda, however added that he personally had no ties to the church.

The Nikkei poll found that 80.6 per cent of respondents saw it necessary to clarify the relationship between the Unification Church and politicians, while 16.8 per cent found it unnecessary.

Mr Kishida’s Cabinet is also separately facing pressure over a resurgence in Covid-19 cases – Japan had the world’s largest number of new infections in the last seven days – as well as persistent inflation and a weak yen.