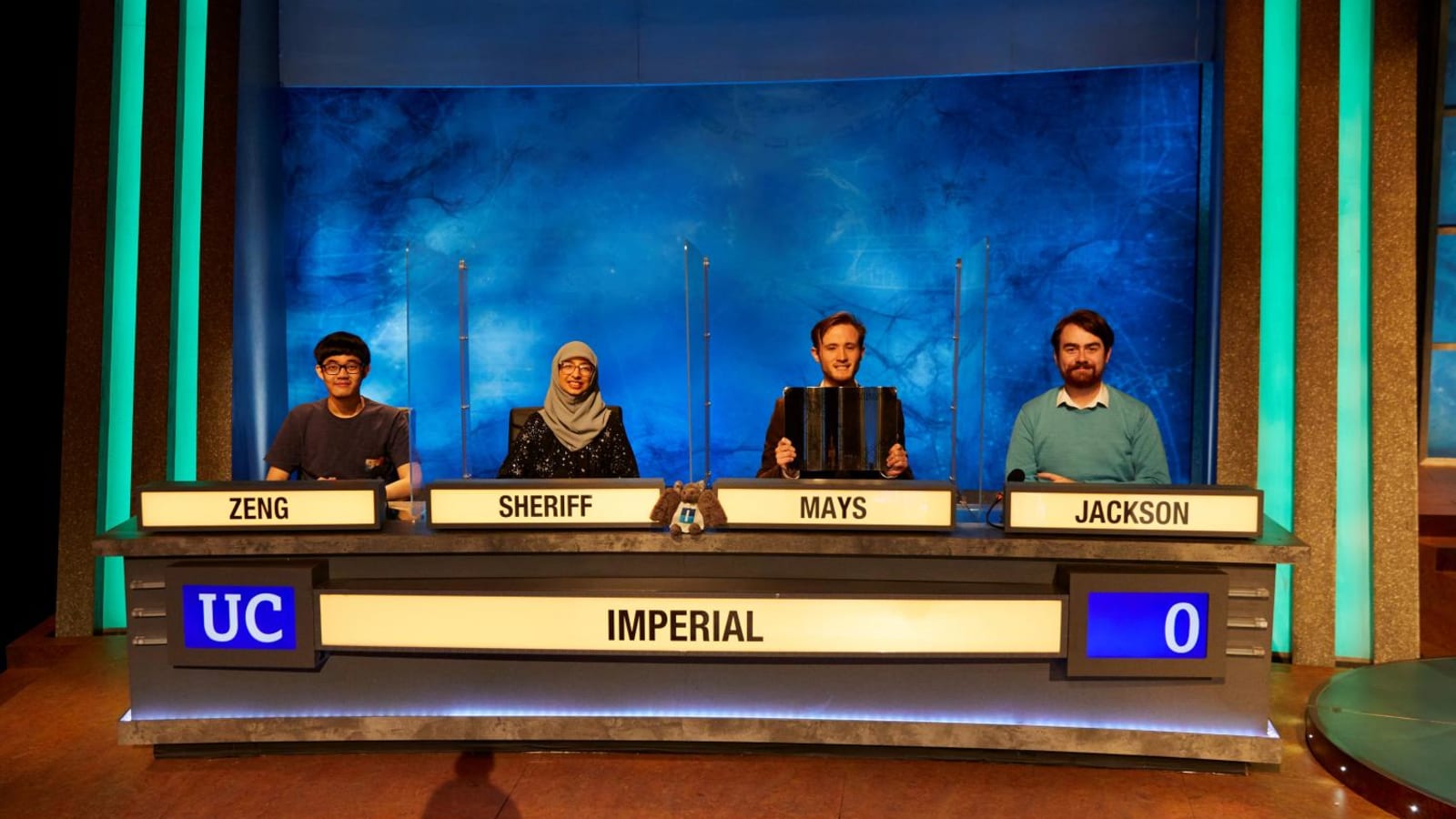 SINGAPORE: With a few minutes left on the clock, Imperial College London trails the University of Reading 105 to 120 in the nail-biting final of University Challenge aired on the BBC on Monday (Apr 4) night in the UK.

Then Maximilian Zeng – the Singaporean student with a talent for answering obscure geography-related questions – hits the buzzer.

The 22-year-old biochemistry student, who’s part of the Imperial College team, fires off the answer to a geography question: “Thought to take its name from the practice of lighting fires for signalling, which upland area has Pen y Fan as its highest point?”

Following the comeback attempt, his teammates then secure two out of three bonus questions on planetary exploration, bringing the Imperial College team to 125 points to edge past Reading.

Then a contestant on Reading’s team buzzes in before a question is completed and gets the answer wrong. They lose five points for the incorrect interruption, taking their score down to 115.

With mere seconds left, Imperial College attempts another question from host Jeremy Paxman. They get it wrong – but it doesn’t matter. The gong sounds, marking the end of the show.

“By the narrowest of margins, Imperial have won and Reading have lost. Bad luck. Many congratulations to you, Imperial. It was a very, very strong performance, I thought,” says Paxman.

The team – whose other members are Fatima Sheriff, Michael Mays and Gilbert Jackson – also beat Reading once when they first encountered their opponent in the quarter-final round.

The season’s fan favourite Zeng has made viewing more fun with his penchant for effortlessly nailing obscure geography questions, if enthusiastic social media commenters have anything to say.

After the final is broadcast, one person tweets: “Fun fact: google earth gets its geographic information from max zeng”.

The finals, however, kick off with Zeng answering a history question.

Straight off the bat, he buzzes in before Paxman has even completed the question: “I need the name of an early historian here. Quote: ‘You know as well as we do that right is only in question between equals in power, while the strong do what they can and the …’”

The quote in question comes from The History of the Peloponnesian War, written by Thucydides, an Athenian historian.

Then in a picture round that shows off Zeng’s prowess, contestants are asked to name the major river from a map that shows its general location.

“The Niger,” says Zeng, referring to the Niger River, the main river of West Africa.

“You’ll need to identify three more natural regions designated wetlands of international importance by the Ramsar Convention. A single word name is enough in each case. All are also UNESCO World Heritage sites.”

Part of a map is flashed on screen with a highlighted portion.

“Sundarbans,” answers Zeng immediately, referring to the mangrove area in the delta formed by the confluence of the Padma, Brahmaputra and Meghna Rivers in the Bay of Bengal.

He correctly identifies the next two wetlands as well, after his captain Mays nominates him without hesitation for each turn.

And on Twitter, a commenter quips, “The two most powerful words known to humanity: Nominate Zeng.”

After winning this year’s show, the Imperial College team hopes it can inspire future Imperial student teams who compete in University Challenge. But the “real gift” has been their friendship, said teammate Fatima Sheriff in the college’s press statement.

“I really hope that we can foster the same level of commitment and enthusiasm for quizzing. The real gift is the team camaraderie, the bonding over stupid facts at silly hours and the in-jokes we have. The months of training together are the most fun I’ve ever had,” she said.