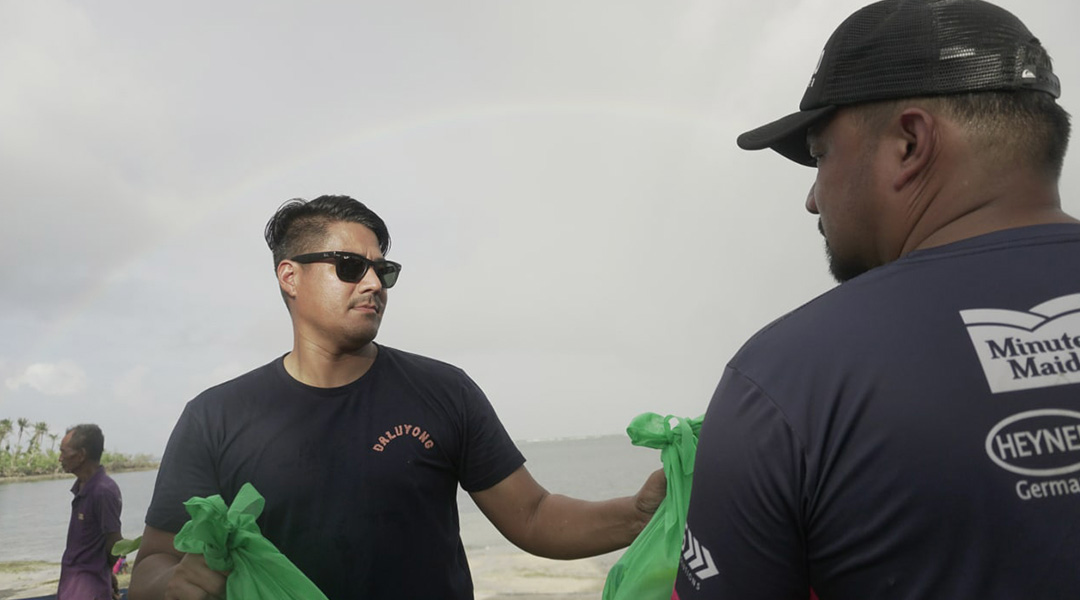 “There are still many, many people who need aid in rebuilding their homes.”

Months into the new year, many communities are still reeling from the devastating effects of Odette. The category 5 super typhoon left many in the country’s belly reeling and without basic necessities such as food and water and a roof over their heads.

Siargao was one of the most badly hit by Odette, and images of its streets lined with torn down trees and homes reduced to debris circulated around social media in the weeks following. The community within the popular surfing destination has come together to help bring the island back to its. One such member of the community is Niño Barbers, who has been living there since 2016.

Barbers says that the community focused on food security such as rice and water distribution in the first two weeks since Odette.

“The challenging part was getting the goods to the island since all modes of transportation in and out were affected,” he says. “After the immediate relief and securing of food and clean water we shifted our focus to rebuilding has many homes as we can up to this date. There are still many, many people who need aid in rebuilding their homes.”

In the course of all rebuilding efforts, he says that he has interacted with a lot of people he has never met before who are asking for help.  “Initially, I observed on the ground that most of the relief were going to municipalities of Dapa and General Luna,” Barbers points out. “There was no help up north which consists of five more municipalities and the island barangays. Two months post typhoon and I’m still sad that the northern part of the island has received very little help.”

Another problem that Barbers sees is that attention has shifted. “Initially Siargao received a lot of public attention and representation because of how popular a destination it is and also because of the community that call Siargao their home,” he says. “Now, it’s died down a lot since then.

Barbers credit the private sector in getting the rehabilitation ball rolling. “Most of the relief came from private sectors and NGOs, like SEA Movement, Lokal Lab, Save The Children, MCKS Caring Heart Foundation and even Pawssion Project X Puppy Puddles,” he explains. “Without the help of of these groups and the private sectors I don’t know how the island would have even began to pick itself up.”

Despite the challenges and the amount of work left to be done, he  realized that Bayanihan still exists as exemplified by the community in Siargao. “What I really have been seeing are locals helping locals,” Barbers says, adding that he remains optimistic about the island’s recover. “Soon the island will rise together. I draw my hope from the locals cause for me Siargao is all about the people,” Barbers says.

But help is still very much needed. “I’m hoping those who are interested in helping still know that they can assist in rebuilding homes by reaching out to the different NGOs who are spearheading the rehabilitation of Siargao or even myself,” he says. “They can simply send me a message through Bayud’s Instagram ( @bayudsiargao ). Any help extended would be greatly appreciated. Together we can rebuild our island home.”

This story was first published in the March 2022 issue of Lifestyle Asia.