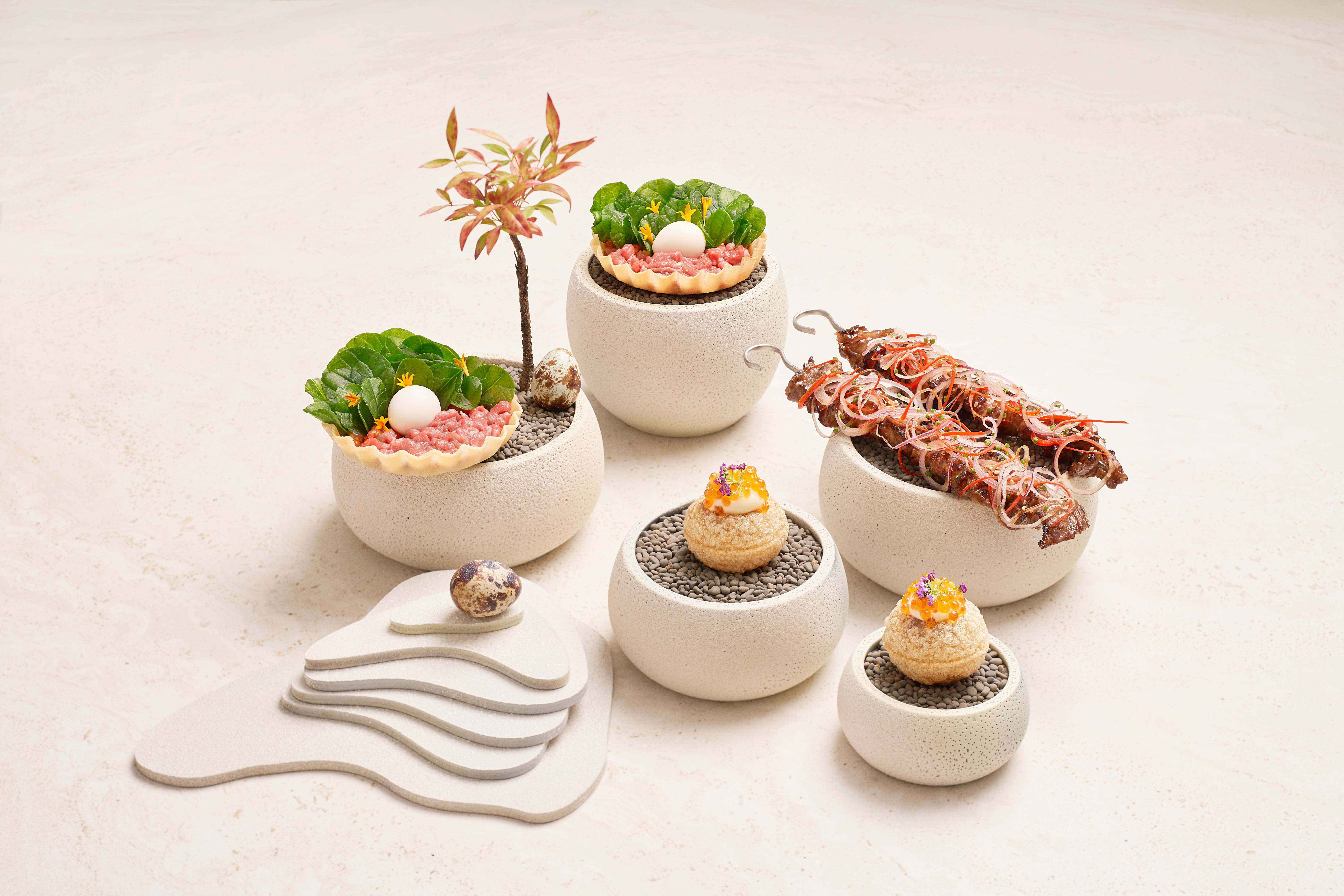 Welcome to Path, Singapore’s latest Mod Asian restaurant located in the heart of the CBD.

The restaurant is launched in partnership with 1855 F&B and helmed by chef Marvas Ng. Here, the 35-year-old chef has dreamt up a menu that’s decidedly Asian in its roots, but also intertwined with classic French techniques that reflect the own path he’s taken before this.

He spent over a decade sharpening his skills at French fine dining establishments in China and Hong Kong, including Le Pan, before heading home in 2019 to join Ocean Restaurant at Resorts World Sentosa. Now, he’s on a new journey to craft a medley of Modern Asian fare for diners.

Dim lights and wooden interiors from the space’s previous life as OLA Cocina Del Mar have now been replaced by an airy interior designed with soft lighting, plush seats, and dreamy curves to reflect topographic maps. While most guests will be more than content with a seat in the main dining hall, those looking for an intimate experience can book themselves seats in the kitchen. Yes, you read that right.

Hidden behind the door is a plush, white table-clothed booth that’s meant for a chef’s table experience: front row seats to a private omakase meal for a special night out. Need something in-between? Private dining rooms are available too. If you haven’t already realised, you choose your gastronomic path (pun completely intended) from the moment you decide to dine here.

Read on for all the highlights of our evening at new restaurant Path:

Fish maw can be a contentious ingredient: most who’ve grown up with it are accustomed to its chewy and gelatinous texture, but those who haven’t will require some getting used to. Thankfully, we fall in the former category, and this was one of our favourite dishes at the table that night. The fish maw is double-boiled to soak up the sake and dashi stock, then served to the table in a pool of beurre blanc sauce. The classic French butter sauce is seen through an Asian lens here, complete with the addition of fermented black bean, garlic, chilli, sake, and the collagen stock that was used previously. A medley of crunchy vegetables and a crowning of caviar, tobiko, and ikura make this a delicate, collagen-packed dish you won’t forget.

The Hand-Dived Hokkaido Scallops comes soon after. Think plump, fleshy pieces seared on a sizzling hot stone by the table, coupled with a douse of seaweed truffle sauce and smattering of furikake for good measure.

Yet, one dish we’ll be coming back for has to be the French Organic Cauliflower. Now, don’t let the brown sphere’s lack of aesthetics fool you. Cut through the blanket of house-made furikake and mayonnaise with a spoon and you’ll be rewarded with an ultra-tender, almost creamy cauliflower that’s been sweetened from the vegetable stock its been braised with, as well as a light crisp from its stint in the deep fryer. We had to stop ourselves from getting seconds, because we were this close to finishing the whole dish on our own.

The scallops weren’t the only dish that arrived to the table with flair. Theatrics ensue when a black box swings by our table, and a flurry of hands and smoke later, a whole bird — golden and glistening — is revealed on a bed of moss. This is the Signature Butter-Roasted Herb-Brined French Poulet.

Here, the fowl undergoes a 16-hour brine that’s infused with Chinese herbs such as dang gui (angelica root), dang shen (codonopsis) and chuan siong (Chinese lovage root), before it’s blanched in a mixture of light soy, hoisin, maltose, and red vinegar, then air-dried for half a day. The final step sees a generous slather of unsalted European butter — 800 to 1000 grams, to be exact — on the bird ahead of roast.

“Mo’ butter mo’ better“, or so it seems, because the result is a glossy, crispy sheet of skin that barely covers the juicy, flavourful bird, which is best had with fresh vegetable rolls, and an accompanying sauce of butter drippings from the roast.

If you still have space in your bellies for dessert, the canelés proved to be a hit amongst all the guests at the table. While the dessert itself is French in nature, chef Marvas adds a touch of his own by substituting rum that’s traditionally used, for baijiu, the iconic Chinese liquor. The result is a crackling, heavily caramelised crust that’s sports a pillowy-moist custard on the inside, only gently perfumed by the spirit. Chef personally sneaks a couple of these each day in his belly to “taste test”, but who can blame him? We’d do the same too.