The Masterchef Singapore judge is tireless in his endeavour to further heritage cuisine here. 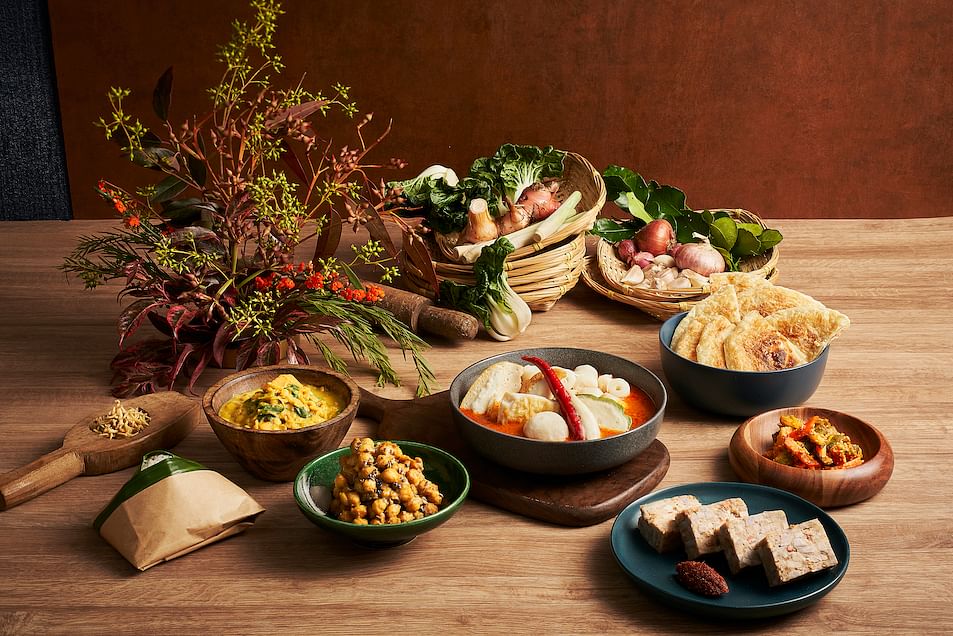 Damian D’Silva is the grandmaster of heritage food, and perhaps one of the loudest voices advocating for traditional cuisine. When Kin unceremoniously closed due to the change of hands at the former Straits Clan members-only club, D’Silva retreated to his own kitchen and launched a three-month pop-up called Damian’s Cookhouse offering only takeaways. It proved to be a wise decision and was a hit with regulars who were confined to dining in small groups at home.

Now resurfacing at a relatively new neighbourhood at the Park Residences at PLQ, he’s opened an all-day dining restaurant in partnership with OUE Restaurants. The bright and airy space has a certain old-school sensibility in its decor with contrasting-coloured ceiling beams and a bar counter set against a mirrored wall.

Its name, Rempapa, is derived from the spice paste rempah and D’Silva’s reputation as the “papa” of heritage cuisine. While Kin was a more restrained version of his vast knowledge and prowess as a chef, expect the extensive menu here to be a full celebration of every cuisine he’s ever known from Nyonya to Hakka.

Some dishes have never been prepared for guests in a restaurant setting such as the Fried Nyonya Fish Cake (a reddish and firmer reiteration of regular white fish cake that’s served with sweet sauce), Sri Lankan Chicken Curry and Tomato Chutney with String Hoppers (idiyappam) or the Kai Fan (inspired by a dish he had from street hawkers when he was young).

He’s also given room for the chefs under his tutelage to showcase their own heritage dishes, building upon his intention of showcasing the roots of Singapore’s convoluted flavours. The chef in mention is Ah Seng, whose Penang-styled Stir-Fried Chee Cheong Fun from his hometown is a hit with everyone at the table. Unlike the steamed version usually eaten at Cantonese restaurants, he fries this up with beansprouts, yellow chives, prawns and eggs in the wok reminiscent of Singaporean carrot cake.

D’Silva takes this opportunity to introduce what he terms Singapore New Heritage Cuisine as well. Keeping what he deems as the “soul” of the classic favourites, he gives minor adjustments to the recipes so that the dishes feel familiar and foreign all at once.

His Braised Beef with Raita & Roti, for example, reminds us of beef goulash but not quite. He’s added round cumin and coriander seeds for complexity, and replaced bay leaves with daun salam (Indonesian bay leaves) that imparts a slight citrus note. On the side to pare down the stew’s sweetness is a serving of Indian raita. It’s a uniquely Singaporean version of goulash and sour cream.

Then there’s the Rempapa’s Pork Chop Curry Rice, a one-bowl meal that’s on the menu for lunch. A generous amount of white rice covered in a thick curry gravy and scrambled eggs topped with a hand-sized portion of pork chops coated in deep-fried hand-pounded cream crackers, finishing one on your own could very well put you in a food coma. Plated like a katsu-don, it’s D’Silva’s take on Hainanese curry rice but with garam masala for a curry that’s not what you’d expect. He’s hoping the more current presentation will get the younger generation interested in heritage cuisine.

The restaurant’s offerings of smaller bite-sized portions with bar snacks and, of course, a Kueh Platter also present a more approachable way to sample his cuisine should you not have the time or gut space to commit to a full meal. Fans of his former eatery South-East Sliders will be chuffed to know the beef brisket with rempah slider (Limpeh Slider) can now be found here.

Or if you’d prefer the unadulterated Masterchef experience, get the Chef’s Menu aka D’Silva’s omakase. Offered to the maximum of 10 guests who book the private dining room at the back of the restaurant, it will be an educational meal with the man himself personally explaining the history of every dish. Be warned, though, you might be too full to walk out after.