Kanye West has quite a thing for face masks.

The rapper has spent much of the year making the headlines with them: he wore a bizarre balaclava to a Balenciaga show, he hosted his Donda album listening party with a pantyhose around his head, and lately he’s been walking around in public with creepy prosthetic masks of white faces. In the middle of the pandemic, when masks are mandatory, West somehow managed to make a statement with that commonplace covering.

But whatever that statement really is can be compared to those masks — mysterious. Some call it performance art. Some think that West, now known as “Ye”, simply wants to be anonymous. Perhaps the masks are meant to distract from what the musician actually does when he wears them, like having coffee with Trump’s former attorney, Michael Cohen, rubbing shoulders with accused rapist Marilyn Manson, or performing at LVMH heir Alexandre Arnault’s wedding.

Or maybe this is how Ye is marketing his upcoming merch, which is reported to include “sanitary masks” and “fashion masks”. (That’s how his buddy Virgil Abloh has been making money in a pandemic, too.)

What we do know is that masks are nothing new to West’s wardrobe. And as intriguing as his balaclavas and Michael Myers disguises are, it was Maison Margiela who made some of Yes’s best masks of all time.

Two years after name-dropping the fashion brand in his and Jay-Z’s album Watch the Throne, Kanye West embarked on his Yeezus tour in 2013 with outfits designed by Maison Martin Margiela, as it was then known.

“We have wanted to work with Kanye West for a very long time, ever since he became a close friend of the Maison; supporting us a lot and coming to our shows,” said the brand. (Before John Galliano joined it, Maison Margiela didn’t have a figurehead and spoke as an anonymous collective of designers.)

The brand collaborated closely with West to realise his vision for Yeezus: “We firstly went through the Maison’s archives, finding iconic pieces to be reinterpreted. We then had a few fittings, bouncing ideas back and forth about how to adapt the garments, the fabrics, textures, colours and details, to transform them into a stage wardrobe.” 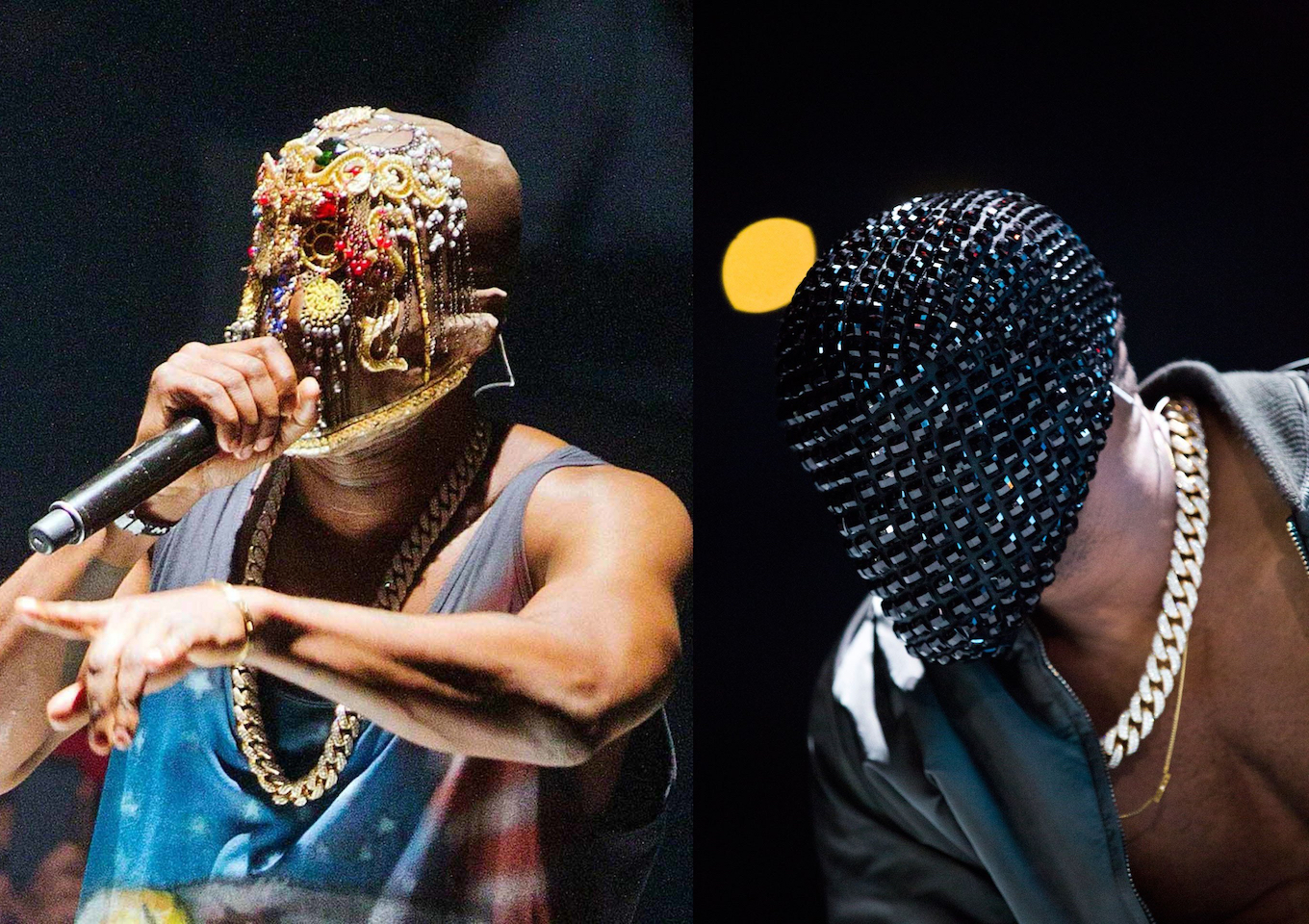 Although West toured in head-to-toe Maison Margiela, all anyone could talk about was the head. Here was the most famous rapper in the world, hiding his face in crystals and mirrors. Again, there were questions: Was this a fashion statement? A revolt against fame? Could Kanye even see through them? (The answer to that last one, according to Maison Margiela, was yes: “It is very easy to see when wearing the veils as the black silk chiffon base is embroidered in a way that allows one to see through the fabric.”)

For Kanye West fans, those avant-garde masks became one of the biggest grails you could own. (One of them was even sold for US$50,000.) But for those in the fashion industry, the bejewelled headgear was already a familiar facet of Maison Martin Margiela’s ‘Artisanal’ haute couture shows.

With the masks, the Paris-based label stripped runway models of their individual identity — a Margiela motif, as mentioned earlier. But those crystal creations ended up putting someone else in the spotlight: Mathieu Blazy, who was exposed as their designer by fashion editor Suzy Menkes.

After Margiela, Blazy maintained a low profile while contributing to fashion’s buzziest brands. He worked alongside Daniel Lee at Céline, then helmed by Phoebe Philo. He joined his partner Pieter Mulier, Raf Simons’s right-hand man, when the latter took over Calvin Klein. (Mulier is now creative director of Maison Alaïa.)

And now, after Lee’s surprise exit from Bottega Veneta, Blazy has been forced out of the shadows again — this time, as Lee’s successor.

Will those Maison Margiela masks make a comeback?

Mathieu Blazy has proven to be a very versatile designer. He went from the artistic maximalism of his Margiela days to the quiet minimalism of Philo’s Céline; and then from the conceptual, anti-commercial universe of Raf’s Calvin Klein to Bottega Veneta’s very profitable, product-driven chapter under Lee.

Stepping up from his role as Bottega Veneta’s RTW Design Director, what exactly should we expect from Blazy now that he calls the shots?

His superiors seem to suggest we’ll get more than Lee’s Instagram-friendly designs. “Bottega Veneta has always been equated with signature craftsmanship and distinctive creativity,” says Bottega CEO Leo Rongone. “Matthieu’s appointment will further enhance the modern relevance of our brand and accelerate our growth, while preserving the values that are at the core of Bottega Veneta.”

And, from Kering CEO François-Henri Pinault: “I am confident that Mathieu Blazy’s wealth of experience and broad cultural background will allow him to bring his creative impetus to the task of carrying on the legacy of Bottega Veneta.”

With creativity being emphasised so much, we can only hope that Blazy does indeed showcase his talents at the helm of the Italian luxury brand. Maybe he will challenge the fashion industry, whose biggest players have come to rely heavily on It-bags and limited-edition sneakers. Maybe he’ll venture into avant-garde territory once again, and introduce inventive forms of BV’s intrecciato weave. And maybe he’ll even make masks out of them.

We will find out soon enough: Blazy’s first collection for Bottega Veneta will be showcased in February 2022.