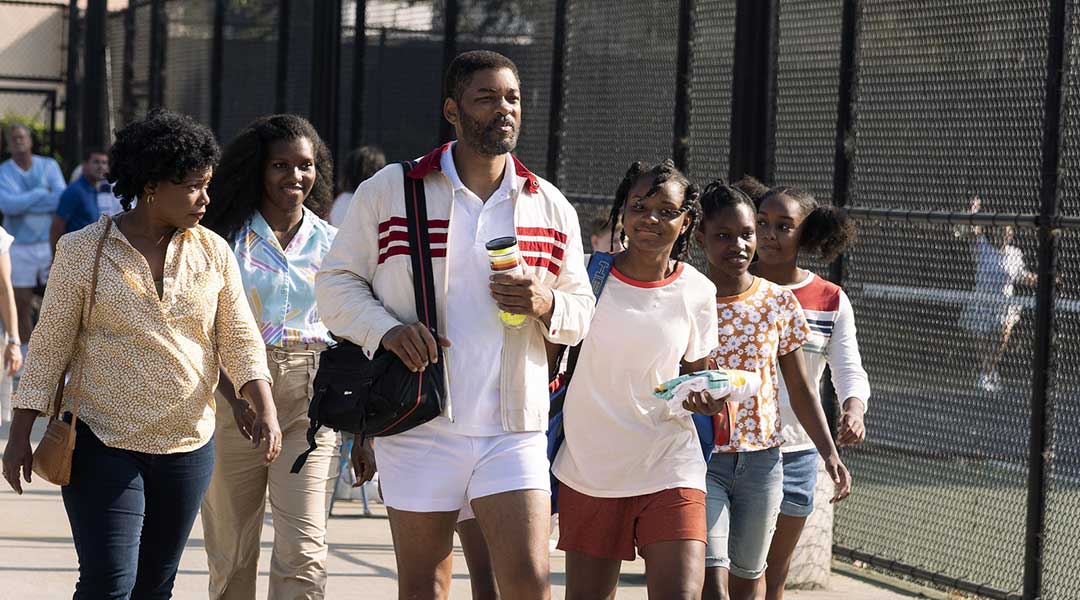 Will Smith plays the man (in short shorts) with a plan in this film about the business of making champions.

Minutes into Reinaldo Marcus Green’s biopic on Richard Williams, we stumble upon words dripping with determination that serves as the movie’s thesis.

READ ALSO: Popularity Contest: You Can Now Vote For Your Favorite Movie At This Year’s Academy Awards

“This world ain’t never had no respect for Richard Williams,” Will Smith as the titular character says as he drives his children in his beat-up Volkswagen. “But they going to respect y’all.”

This gives shape to the plot, with motivations big and small all rooted in this anger, pain, and insecurity. It already says a lot about Richard, the architect, the driving force, the man with a plan behind the success of two of the most recognizable names of not just tennis, but all of sports.

Longtime tennis fans like myself might point out, however, the movie leaves out a lot about the patriarch. It makes him out to be someone tamer, more pure-of-heart than what followers of the sport have followed through the grapevine of the years. (This was a movie that was authorized by the family after all.) But this perceived bias, in my humble opinion, doesn’t make the movie hard to like nor to follow.

The film starts by painting us a picture of the Williamses life in Compton: double shifts to make ends meet, nosy neighbors with an opinion on your parenting skills, trying not to get murdered by gang members that run the streets, and, of course, a grocery cart full of tennis training. Williams the elder isn’t just pitching his vision of greatness to possible funders or coaches that can train his daughters pro bono, he is constantly reminding his entire family to stay on the path.

This resolve to stick to the plan only significantly wavered only once in the two hour-24-minute run time. After getting beaten up one too many times, he decides to go off-course by way of a hand gun, a move that would’ve forever made all his dreams for his family gone. He and his loved ones were saved from that fate that night, ironically, by tragedy.

As he moves his daughters from coach to coach, and uproot his family to move to Florida, this confidence and determination, this self-belief not only builds for the father. Both young athletes know that their future is set, that it isn’t a question of if but when, and the viewer is constantly reminded of the duo’s impatience to prove that they are, indeed, ready.

This is illustrated in another telling scene when 14-year-old Venus was being interviewed by ABC ahead of her match against then world number 2 and multiple Grand Slam champion Arantxa Sanchez Vicario at the Bank of the West Classic.

“I am very confident,” she says, smiling.

“You say it so easily,” the interviewer continues with blatant disbelief painted on his face. “Why?”

In another example of making sure the plan and narrative are followed, Richard then interrupts and berates the interviewer for seemingly making the young girl doubt in herself.

Smith, for his part, admirably portrays his role complete with physical affectations and dead eyed resolve. His wife Oracene, played by If Beale Street Can Talk’s Aunjanue Ellis, is Richard’s foil, who is as determined as her husband, but not necessarily of exactly the same things. Sanniya Sidney and Demi Singleton—Venus and Serena, respectively—show the same youthful exuberance that the world fell in love with decades ago when they first burst into the scene.

The world knows how the rest of the story played out. The two would conquer the professional tour, break barriers in and outside of tennis, and inspire countless others who grew up in neighborhoods like Compton to wish beyond what’s in front of them. What this film ultimately teaches us is that not everyone, unfortunately, is born with respect automatically afforded to them. But, for better or worse, you can earn it with enough grit, gumption, and a well-laid plan.