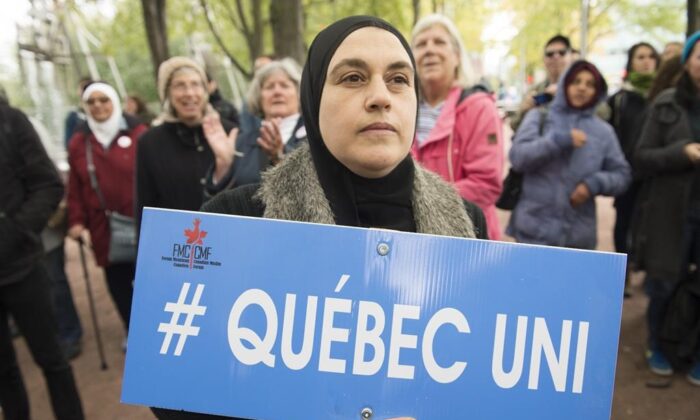 People hold up signs during a demonstration against Bill 21 in Montreal, Sunday, October 6, 2019. The controversial Quebec secularism law bans some public-sector employees from wearing religious symbols in the workplace. (THE CANADIAN PRESS/Graham Hughes)

Justice Marc-Andre Blanchard did however rule that certain provisions of the law are unconstitutional as they pertain to English school boards.

The judge also struck down a ban on members of the national assembly wearing face coverings.

Bill 21 was adopted in June 2019 and prohibits public sector workers who are deemed to be in positions of authority, including teachers, police officers and judges, from wearing symbols such as hijabs, kippas or turbans at work.

The law made pre-emptive use of the Charter of Rights and Freedoms’ notwithstanding clause, which shields legislation from most court challenges over violations of fundamental rights.