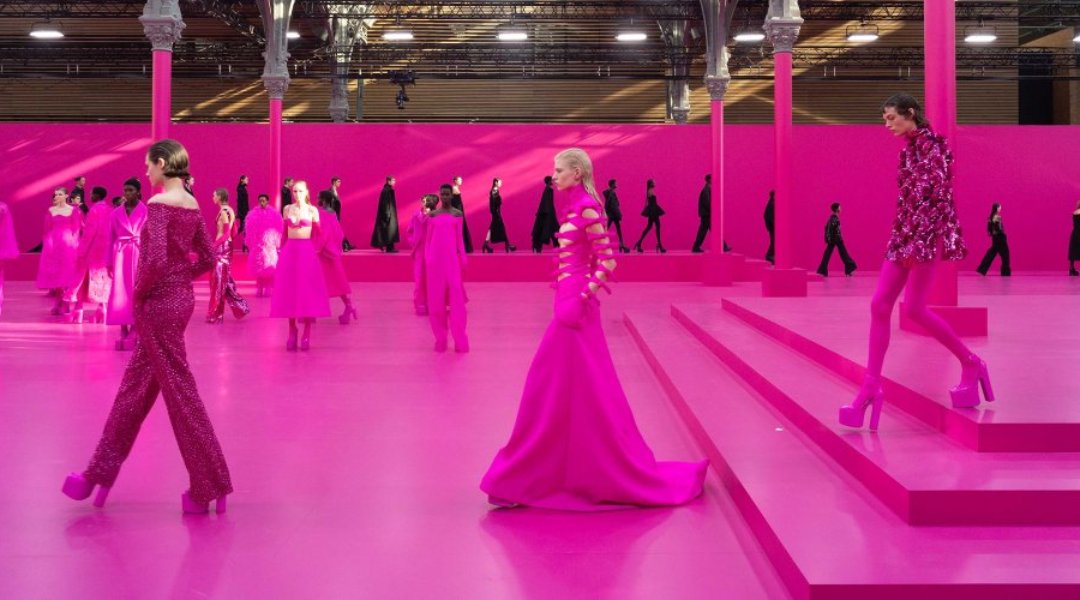 The fuchsia is here.

The color pink represents love, community, energy, freedom, individuality, curiosity, and invention, according to the Italian luxury fashion house. It explained that Piccioli had followed an “experimental urge” for a monochrome collection.

“Stripping the palette down to a single hue, relentlessly, he does more with less, maximizing expressive possibilities in the apparent lack of possibilities,” Valentino said of the work of its creative director.

Indeed, the majority of the collection’s 81 looks were pink. The remaining 30 designs that appeared toward the latter half of the show switched to a polarizing black palette.

This was all set against the backdrop of the Le Carreau du Temple, enveloped in pink decor.

For their vision in pink, Picciolli prepared an array of minimalist and ready-to-wear styles featuring scallop details, loose silhouettes, and generous proportions.

VIP guests include Lewis Hamilton and Zendaya, who came in an all-pink Valentino suit.

The Emmy-winning actress was announced as the new face of the luxury fashion brand in December 2020.

Meanwhile, visual artist Doug Coupland fashioned the show’s invitation and graphic statements, which Valentino displayed on surfaces all around Paris.

Historically, pink attire has been documented in ancient India, imperial China, and 18th-century European society. It became a symbol of social status in the latter since materials used to dye expensive garments had to be imported from central Asia and South America.

Society for centuries had associated pink with masculinity and blue with femininity. This switched up starting in the 1940s and became cemented in the 1950s, with then United States First Lady Mamie Eisenhower donning a pink inaugural dress.