There’s always a floral destination waiting to be transformed come blooming season. And you don’t have to be a plant mom to be moved by the hues of flora at its peak. We list out a few spots across the country where you can head to witness a floral explosion.

Every year, a profusion of flowers paint entire towns and cities in stunning shades of red, pink, or gold, infusing the air with their sweet fragrance. And it’s hard not to be drawn by their charm. Come spring, for instance, social media pages are flooded with images of hills, trees, streets, backyards, and even the hoods of cars adorned with delicate and vibrant petals.

Several travellers even plan entire vacations around destinations that are defined by their floral landscapes and festivals. Take, for instance, the cherry blossoms in Japan or the fat lavender fields in Provence, which draw tourists from across the world. But if you’re in India, you don’t have to go too far to have your breath taken away by pretty blooms. We round up a list of spots that transform during the blooming season.

Explore these destinations in India through their blooming seasons 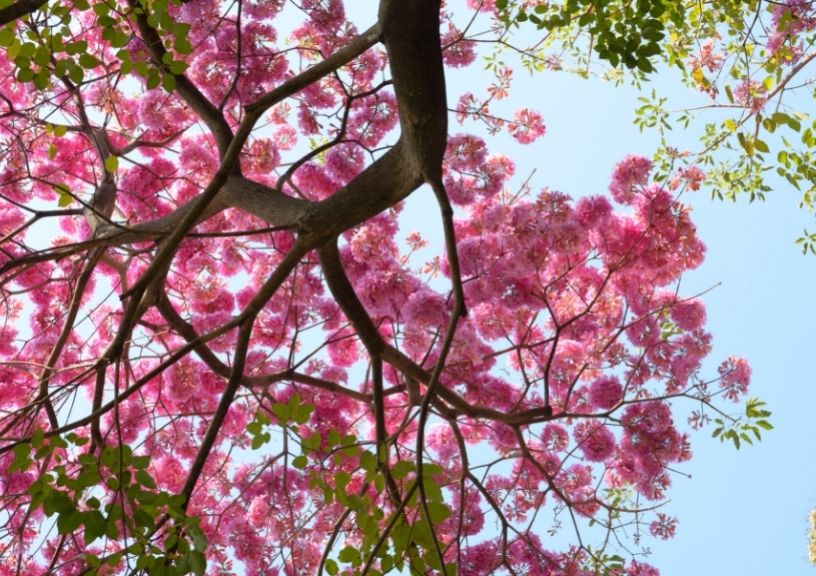 Between January and March, #PinkBengaluru trends on Twitter and Instagram as rosy trumpet flowers add a bright shade of pink to the city’s landscape. Not indigenous to the region, they were introduced to Bengaluru by the British to establish a certain colonial botanical aesthetic. Reportedly, after they left, Bengaluru’s horticulturist SG Neginhal planted tabebuia rosea (pink trumpet) as avenue trees in the 1980s. Now, they line the streets of the city and are a sight to behold every late winter or early spring season. Easily distinguished by pink, trumpet-shaped petals and yellow throats, these delicate blooms are found everywhere in the city. But the best spot to enjoy them is at Cubbon Park in Ashok Nagar. 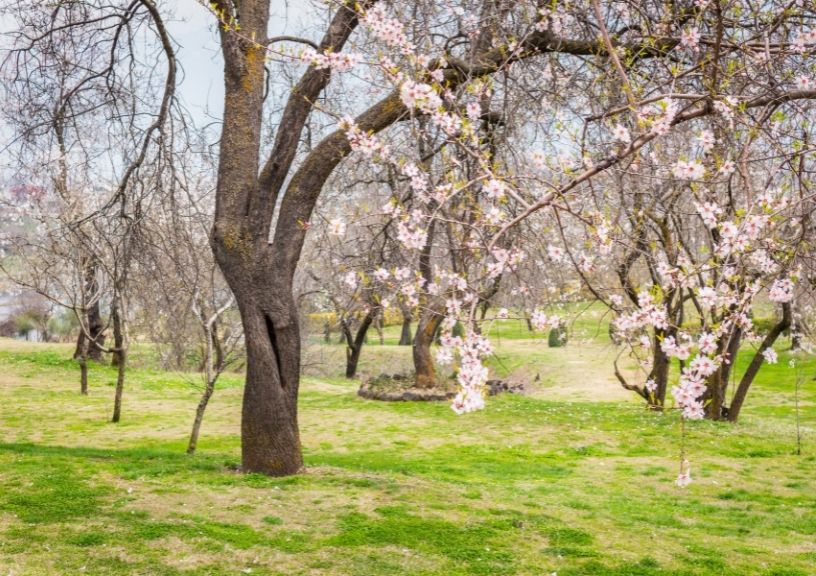 Delicate and pale petals of almond blossoms dot the streets and gardens of Kashmir every year between the months of March and May. Locals and tourists alike head to the historic Badamwari garden in downtown Srinagar to take in the serene, almost magical sight. The early bloom time symbolises hope and strength and marks the arrival of spring after a cold winter. Usually, this time brings in celebrations and cultural events which feature folk singers and vendors serving tea and snacks to those visiting the almond trees. This blooming season is also the best time to go out for a picnic in the valley. Come April, Delhi takes on a golden hue, thanks to the Amaltas trees in the city. Cassia fistula, the botanical name of yellow shower trees, is native to India but was planted around the city by the British in the early 1920s. Today, they’re best sighted in and around Lutyens as well as the streets of Amrita Shergill Marg, Shanti Path, and Akbar Road. A drive around Chanakyapuri also promises some breathtaking visuals. You might be able to spot these long, grape-like golden bunches well into the summer month of May. 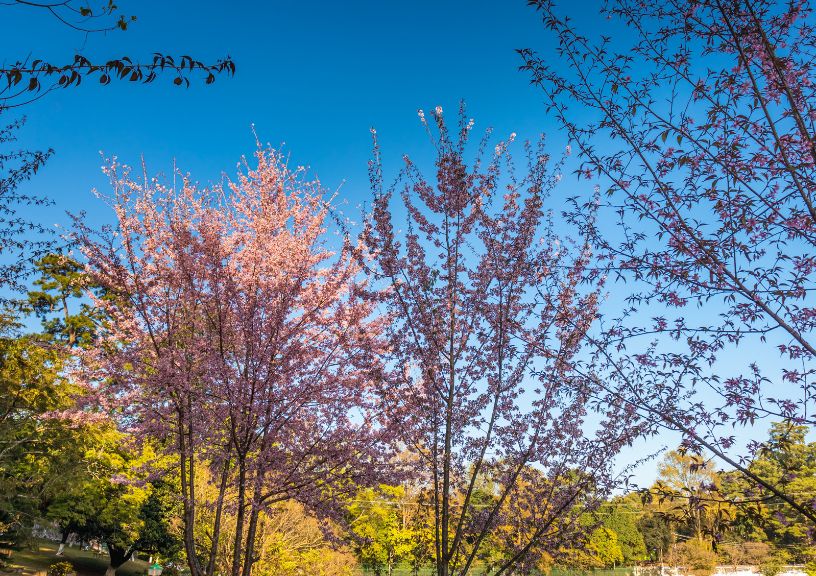 Salmon-shades adorn the natural topography of Shillong in October and November every year. Botanically known as Prunus cerasoides, these were reportedly planted sometime around 1975 on the recommendation of the then conservator of forests BN Das, who believed that they were sturdy, fast-growing, and beautiful throughout the year. Hills on both the East and West are now lined with them. Drive down from Guwahati, and you’ll see shades of pastel along the way, or head to The Ward’s lake, which might even have celebrations around the flowering season. Other local-favourite spots include the Golf course and the snaking roads going up the mountains in upper Shillong. 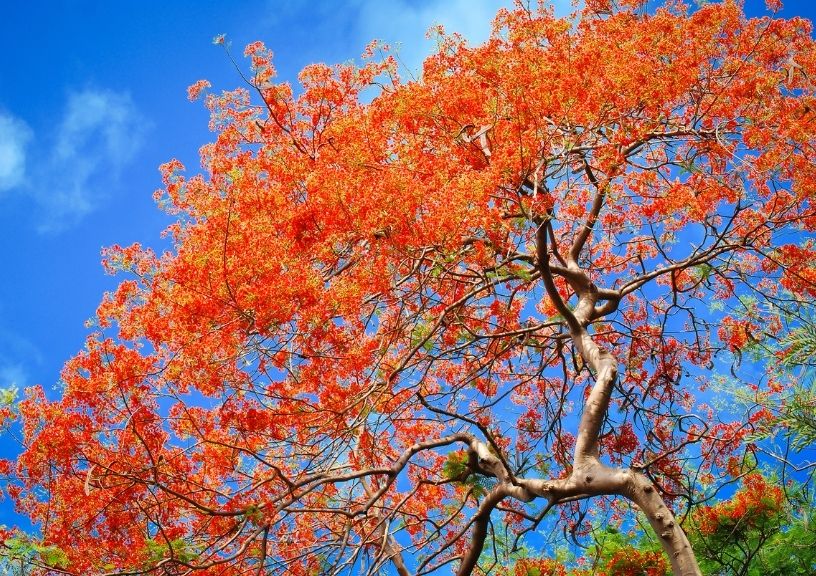 Fondly known as Gulmohar, this flower is originally from Madagascar, where it’s now nearly extinct. Characterised by large, crimson coloured spade-like petals that spring forth from a star-shaped centre, the bloom is at its best in the months of April and May. It’s near impossible to miss this one in the city as it carpets the streets and roofs of homes in shades of red. The tree is a popular tropical ornamental tree and is one of the earliest ones to have been cultivated in the country. Locals recommend a walk through Colaba and Aarey colony to fully enjoy this summer delight. 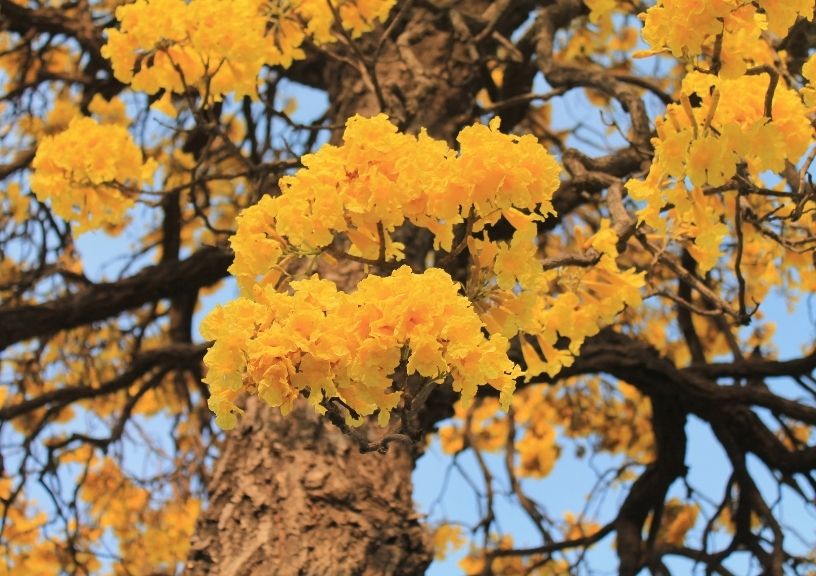 April marks the season when Chandigarh’s natural topography bursts into energetic hues of yellow. The yellow trumpet blooms, botanically known as tecoma argentea, look a lot like Delhi’s golden shower but are quite different. These flowers are bell-shaped and five-lobed, with delicate streaks of orange-red within them. They’re bee magnets as well. These line the roadside avenue of Jan Marg and grace the Shanti Kunj park in sector 16. One of the best places to spot them is the Chandigarh botanical garden, and they stick around until August. 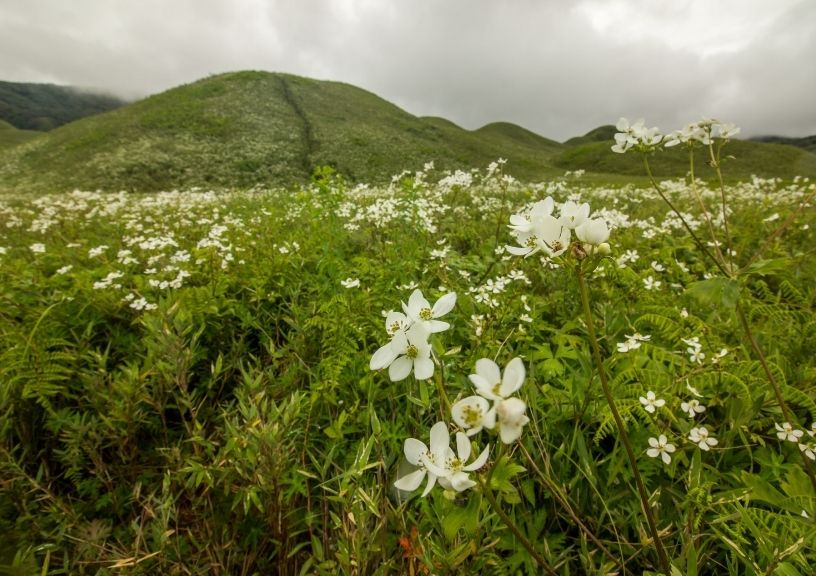 A unique, rare species of land-lily found only in Manipur’s Shirui Hills, the Shirui lily grows at a height of 8,500 feet above sea level and is the state’s official flower. Interestingly, since its discovery, scientists have tried to transplant it to other parts of the world, in vain. The flower is botanically named lilieum macklinae sealy after the wife of the flower’s discoverer, botanist Kingdon Ward. Every year, several travellers head to the region to spot the bloom. You can spot the bell-shaped delicately bowing flowers bloom from mid-May to early June. 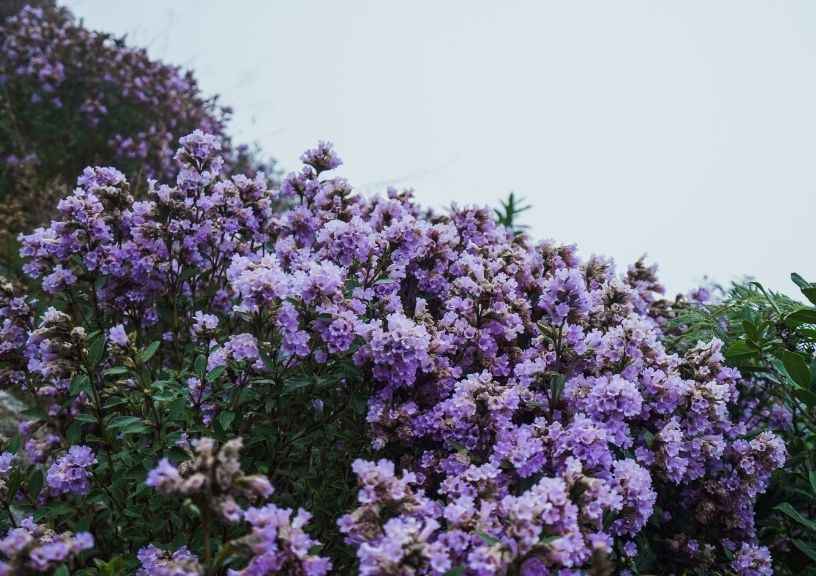 Every 12 years, the hills of Munnar are bathed in a sea of blue in a spectacle so rare, it almost always makes the headlines. The neelakurinji, botanically known as strobilanthes kunthiana, is locally known as kurinji, and flowers grow at an altitude of 1,300 to 2,400 and are bright and bell-shaped. The next flowering season is believed to be in 2033 in the months between August and October, with many travellers chalking down the dates for the occasion. Also, a lovely sight during this time includes the local endangered mountain goats, the Nilgiri Tahr, who make their way down the blue speckled hills. The best spot to watch these are at the Anamalai hills. 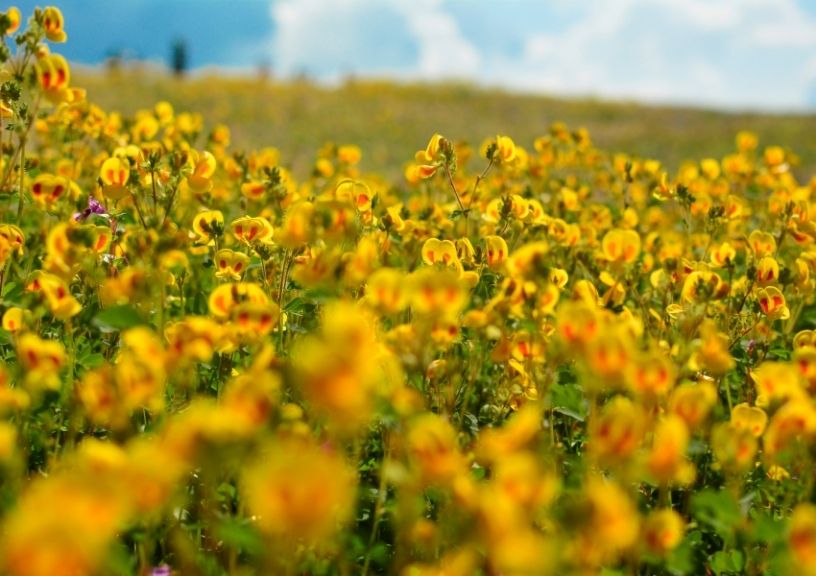 Different seasons bring a certain blooming magic to the Kaas Plateau in Maharashtra. The lush topography glows through the year with different species of flowers blossoming. The most prominent is the smithia, which is characterised by yellow petals with two red speckles on them. Their quirky appearance has earned them the nickname Mickey Mouse. Cheery in countenance, these are at their best in between September and December. A trek here is worth the trip.

This story was first published on Travel+Leisure India.

The post Painting the town in different hues are these blooming seasons in India appeared first on Lifestyle Asia India.