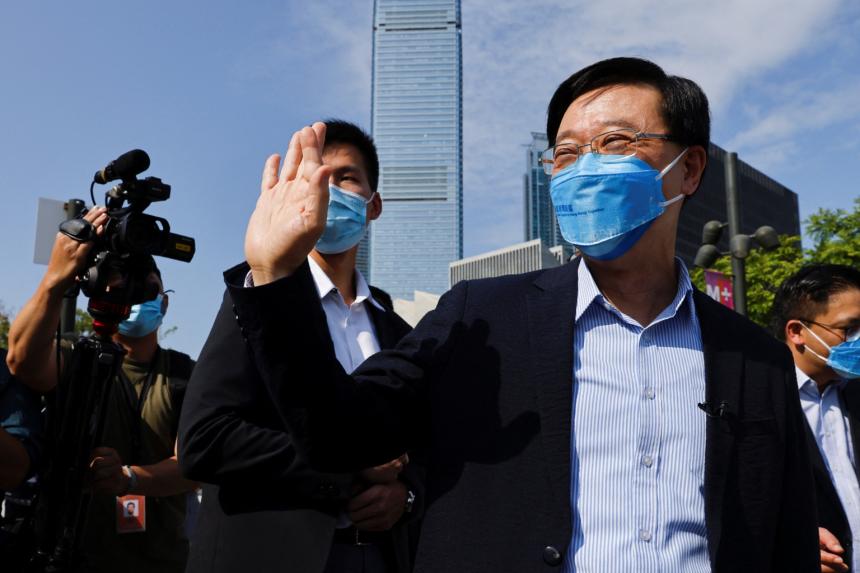 HONG KONG (BLOOMBERG) – Hong Kong is counting on a former cop to address its growing list of headaches. Just don’t expect the new leader to solve the housing crisis – even though Beijing has blamed the problem for social unrest, analysts say.

As the former security secretary who led the crackdown on the 2019 protests, Mr Lee’s lack of exposure to the business community and his own priority on securing stability mean the world’s most unaffordable housing market isn’t likely to get cheaper any time soon.

“All chief executives pledged to solve housing and livelihood issues when they came in. In the end, the problem of inequality and unaffordable housing continued to worsen,” said Dr Ho-fung Hung, a political economy professor at Johns Hopkins University. “It is not sure whether he has the calibre and expertise to deal with those problems more effectively than his predecessors.”

Tackling housing issues has always been a thorny issue for the Hong Kong government.

For Mr Lee, it would mean taming the city’s property moguls while obtaining their buy-in, and tempering prices while ensuring the health of a crucial pillar of the economy and government coffers.

Letting resentment continue to seethe at housing and other social issues could also deepen public distrust in government and exacerbate the outflow of residents already underway.

The challenges faced by Mr Lee, who served in the police force for three decades, are only growing.

Soaring property prices during more than a decade of ultra-low interest rates have become a major political risk for governments all around the world.

The problem in Hong Kong is particularly acute as not only are homes expensive, they are mostly small. Many underprivileged residents live in tiny subdivided units or cage homes.

It’s also taking longer for Hong Kongers to get into public housing. They can currently expect to wait 6.1 years before getting an apartment as of the end of March, the most since 1998, according to government data.

There are about 147,500 applicants at the moment. About 28 per cent of the population lives in public housing.

Mr Lee, 64, was formally confirmed earlier this month as Hong Kong’s new chief executive after he was picked by a majority of 1,424 eligible electors. He was the only candidate put forward to an election committee revamped by Beijing in 2021 to stack more members loyal to the government.

Unlike previous chief executives, Mr Lee’s manifesto, released weeks before his confirmation, had a clear focus on how he would safeguard China’s constitution and Hong Kong’s Basic Law, while policy issues lacked extensive detail.

Though that focus on national security is in line with President Xi Jinping’s agenda, expectations for Mr Lee to tackle livelihood issues are also high as Chinese authorities have made it clear that they see a connection between housing and the public discontent that exploded into 2019’s unrest.

Chinese Vice-Premier Han Zheng told local officials in early 2021 that they needed to work on solving the housing problem, and months later, the head of China’s top agency overseeing Hong Kong set a goal to tackle the crisis and get rid of cage homes or subdivided apartments by 2049.

Mr Lee has pledged that housing will be a major focus of his administration and has presented ideas for how to increase the supply.

The most notable suggestion in his manifesto was an idea to allow residents seeking public housing to move in before nearby facilities and transportation are completed, which Mr Lee said can shorten waiting times by a year.

Last week, Mr Lee announced a government department revamp that will split the existing Transport and Housing Bureau into two, creating a Housing Bureau dedicated to property issues. The idea was first proposed by the current administration.

“I’ve emphasised time and again that the provision of land and housing is a major area of the government’s attention and agenda,” Mr Lee told reporters, adding that increasing land supply will be a priority.

Mr Lee has also said he would simplify the land and housing development process, which in practice could mean reducing the time given to public consultations and environmental impact assessments.

The incoming chief executive is also getting a helping hand from the very people who are often blamed for the city’s housing problems, as developers including Sun Hung Kai Properties Ltd have been voluntarily donating land for social housing and participating in the government’s public-private land sharing programme.

Nevertheless, property developers still had much of their voting power in the election to pick the chief executive stripped away as part of Beijing’s political overhaul, signalling their decreasing importance in the city’s economic and political landscape.

Despite that snub, tycoons were among Mr Lee’s team of consultants, and many developers took out advertisements in newspapers to congratulate Mr Lee.

Mr Lee must tread carefully in his efforts to tackle the housing issue. By going after real estate developers too hard in a bid to tame the market, he could risk depressing prices for existing homeowners with mortgages.

Ultimately, property analysts don’t see Mr Lee’s tenure as having a significant impact on prices in the near future.

Meanwhile, Mr Cusson Leung, head of Asia property research at JPMorgan Chase & Co, forecasts prices to go up as much as 10 per cent this year, citing demand from mainland Chinese buyers.

Mr Ivan Choy, a senior lecturer at the Chinese University of Hong Kong, said that in the end Mr Lee will have to answer to the mainland on policies including housing.

“One of the indications of seeking someone with a disciplined service background to be chief executive is that Beijing will decide on many complicated policy issues and help him execute,” he said.