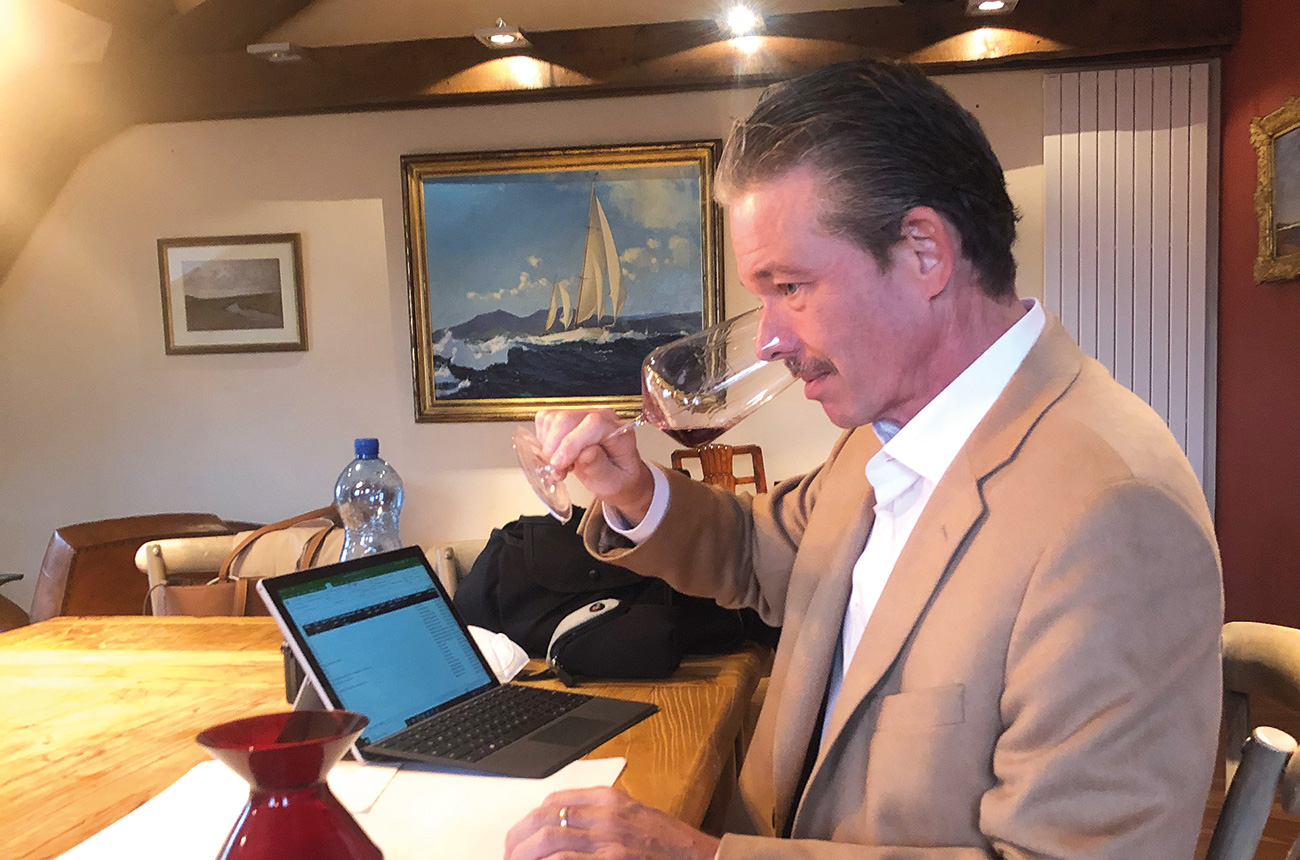 Tongue firmly in cheek, I sometimes define ‘wine consultant’ as ‘someone lacking employment who will work for whoever pays them’.

Although meant in jest, the implied question is valid: just what does a wine consultant do? More importantly, in this age, when every assistant in a retail shop styles him- or herself a sales consultant, who would hire one?

The short answer is this: a wine consultant is someone who advises wine lovers about their passion.

He or she advises buyers on what to buy (and at what price, and from whom); and advises sellers on how and where to sell in order to realise the best return.

If I did not begin my working life at 17 with the ambition to become a wine consultant, it was solely due to a lack of imagination.

I loved food and cooking, and started out as a chef, which took me to Paris in 1981 and the Le Cordon Bleu culinary school. Back in the States from 1994, I began a career in the wine trade that included seven years in wholesale, a further seven at Moët Hennessy USA, and four as head of department at Christie’s auction house.

My transition to wine consultant

In 2012, however, I then found myself living in Hong Kong and needing a change. I still kept an apartment in New York, where I had worked from 2008 as head of Christie’s wine department under my mentor, the late Michael Broadbent MW.

But how would I pay the rent? I reasoned that the skill set I had developed at Christie’s was sufficiently advanced to offer value to the right buyers. My first qualification was that I knew all the tricks of an auction house, and could help those on the other side to navigate the tricky shoals of the secondary wine market.

Buy three cases of great wine at the right price, and in principle you can drink one for free if you sell the other two at the right time.

I mentioned my thoughts to a client at a pre-sale dinner one evening at One Harbour Road restaurant in Hong Kong. ‘Let me be your first client!’ was his immediate response. The die was cast – I had decided to open my own shop, and said buyer did indeed become my first client.

Biography of a wine consultant

Painstaking detail: what it takes to be a wine consultant

My first step was to complete the qualification to perform valuations of wine collections that would stand up to the scrutiny of insurers, lawyers and banks.

The process is far more complicated than pulling a number out of a hat, since detailed standards have been established for valuation professionals. This aspect of the consultancy is far from the allure of the image many have of the globe-trotting wine expert, yet it is the essential underpinning to this line of work.

A proper valuation begins with inspecting and photographing a collection and describing the condition of each bottle in detail.

After spending a week or more in a cold cellar evaluating a wine collection, the riveting process of seeking out comparable sales begins. Weeks of research in front of the computer are followed by days of writing up and justifying conclusions.

The work is dry, detail-oriented, and not at all suited to pairing with a nice glass of claret. The results, however, can be enormously helpful.

A properly prepared appraisal can be beneficial, whether it is used to submit an insurance claim for damaged wine or to bring top dollar for a collection being sold at auction. One client even secured a loan of £20 million ($26m) using his wine collection as collateral.

The inspection process can have other uses as well. As wine prices have continued their steady rise, nefarious actors occasionally attempt to counterfeit sought-after bottles.

Through long years of looking at rare bottles of wine, it is possible to learn the ‘tells’ – mistakes made by counterfeiters as they prepare their forgeries. Some are obvious, such as misspellings or anachronistic labels. These days, though, counterfeiters are more sophisticated than they were in the past, and problematic bottles are more difficult to spot.

With experience, one develops a sense of when something is not quite right. However, it is far more challenging to articulate clearly why this is the case.

A well-written inspection report that sets out the reasons clearly and backs up the assertions with photographs has more than once garnered a refund for a doubtful client.

Ultimately it is much easier not to purchase dubious wine in the first place. Performing due diligence before purchase is one of the primary services that a competent wine advisor can offer.

The process begins with an essential injunction – know the vendor and the provenance of the wine. If either seems opaque, it is best to forgo the purchase.

Although it may seem like a lost opportunity, it is usually the case that if it seems too good to be true, it probably is.

Dealing with a reputable merchant that is straightforward about its sourcing processes or an auction house that has examined the provenance of the wines it is selling will go a long way in the quest to avoid the questionable.

The other injunction that I often invoke is ‘don’t chase the unicorn’. Unicorns are rare wines that seldom come up for sale. It is precisely this sort of wine that is most liable to be counterfeit.

The trick is to identify wines a client will love (rather than those you would have for yourself), and how much to pay to secure them without overpaying.

Sometimes truth can be stranger than fiction. A client once sent me to Burgundy to look at a collection of large-format bottles of older vintages from a very renowned domaine. The labels indicated that they had been exported to Italy. The labels looked correct, but something was wrong – the wax at the top of the bottles was the wrong colour, and it was not neatly applied. It looked as if someone had dribbled candle wax on the top of the bottle.

I mentioned my reservations to the vendor, who produced a receipt. The asking price was more than €1 million ($1.1m); I wanted to be sure.

As it happened, I knew the Italian importer personally. Later that day, we spoke on the telephone. ‘Charles, the wax was all broken when the bottles arrived, so we fixed it,’ he said. ‘You fixed it yourself, at your warehouse?’ I queried. ‘Yes, Charles, we fixed it ourselves.’

This was 1985. Times were different then. I advised my client that I believed the bottles appeared to be correct but that they would be unsaleable since no one would believe that story secondhand. The client bought the bottles. To the best of my knowledge, he has drunk most of them with his friends.

Dining out: a wine consultant at lunch

Unfortunately, he did not invite me. Often enough, however, I am included. I was recently invited to a two-star Michelin restaurant for lunch by an old friend I mentored in the Master of Wine programme a decade or more ago. He asked me to order wine: ‘I was thinking Bordeaux, and I want something nice. My treat.’

I suggested a St-Emilion, Château Magdelaine from the 1980s. ‘Good, but I want something nicer. What do you think of this?’, he asked, pointing at the Mouton Rothschild 1993.

I explained that if he really wanted to splash out at lunch, the Mouton ’89 was only $50 more on the wine list, and it was a much better wine. He agreed, and it went down a treat.

We enjoyed this charming luncheon wine as he explained that the start-up he helped found had just sold for $1.2 billion. Apparently, he now had everything he wanted in life… except someone with whom he could enjoy great wine.

I have, in fact, learned many valuable lessons over lunch. One of them was at Scott’s in Mayfair. After inspecting wine for a week with a client at Octavian’s cellar storage in Wiltshire, we returned to London. My client mentioned he had never met Michael Broadbent. Would I ask him to lunch?

Michael was happy to be invited to Scott’s. We sat down, and I promptly handed him the wine list. ‘Oh, no, dear boy. Why don’t you pick the wine?’ he asked. I instantly felt put on the spot – Michael was my idol.

I looked at the list as the three of us discussed what to eat. Oysters, lobster and Dover sole were the order of the day. I had a sudden inspiration: ‘Michael, what do you think of Champagne for lunch?’ ‘Don’t be silly!’ he shot back, ‘I had that for breakfast.’

Of all the skills I learned from my mentor, the most useful was without doubt the art of advising wisely. We settled on a Chablis Grand Cru Les Clos from François Raveneau, to the general satisfaction of everyone.

What does a wine consultant do? Key services rendered

Some clients want to be told what to buy and what to pay for it, while others love the thrill of the chase and make their own purchases.

Most clients are somewhere on the spectrum between buying only to drink and buying only for investment – very few are purely motivated by one or the other.

Work can include vetting stock prior to purchase, liaising with vendors on fulfilment, shipment and storage of wine and subsequent inspection, as well as negotiating returns if required.

Many clients are more interested in selling than in buying, and I assist by negotiating the terms and conditions of the contract, the marketing of the sale, and the settlement of funds.

Other clients are more interested in visiting wine regions and meeting producers. Clients who don’t have time to travel often want to meet in restaurants to enjoy top bottles.

The unifying theme is that they want the best from each region, and are seldom intrigued by wine-world fashions, such as natural wine or orange wine.

One ends up choosing wine for every occasion. Often, they will be for cellaring, but sometimes they’ll be wines for a business dinner, a family gathering, or provisioning a yacht in the Mediterranean for a month of cruising.

How much do wine consultants charge?

Fees vary with the level of service required, but are invariably in the form of a retainer paid quarterly, to avoid suspicion that I am driving up purchases to enhance my compensation.

The post My life and job as a personal wine consultant appeared first on Decanter.