Monte-Carlo Bay Hotel & Resort has announced the launch of Sea Bay, its latest offering set in the Larvotto natural reserve, one of the most sought-after beachside locations in the world.

The Larvotto Beach in Monaco is a popular beach in the Mediterranean. But instead of being known for powder-soft white sands, the beach draws crowds with its rocky shores, glamorous eateries, luxury accommodations, and glitzy backdrop.

On the island’s edge is The Monte-Carlo Bay Hotel & Resort, which is now offering a 700-square-metre guarded swimming area in the Larvotto nature reserve. With a Green Globe certification, the area welcomes swimmers without disturbing its flora and fauna.

To offer guests a unique experience by the beach, the Sea Bay offers ten sun beds with Mediterranean island names. Each bed has been set up by the water for lounging and enjoying food by Marcel Ravin, a Michelin-starred chef who leads Blue Bay, the signature restaurant at the Monte-Carlo Bay Hotel & Resort.

Furthermore, the resort received authorisation from the Association Monégasque de la Protection de la Nature (Monaco Association for Nature Conservation) and does not permit the use of chemical products such as soaps or shampoos, offering only organic sun products. 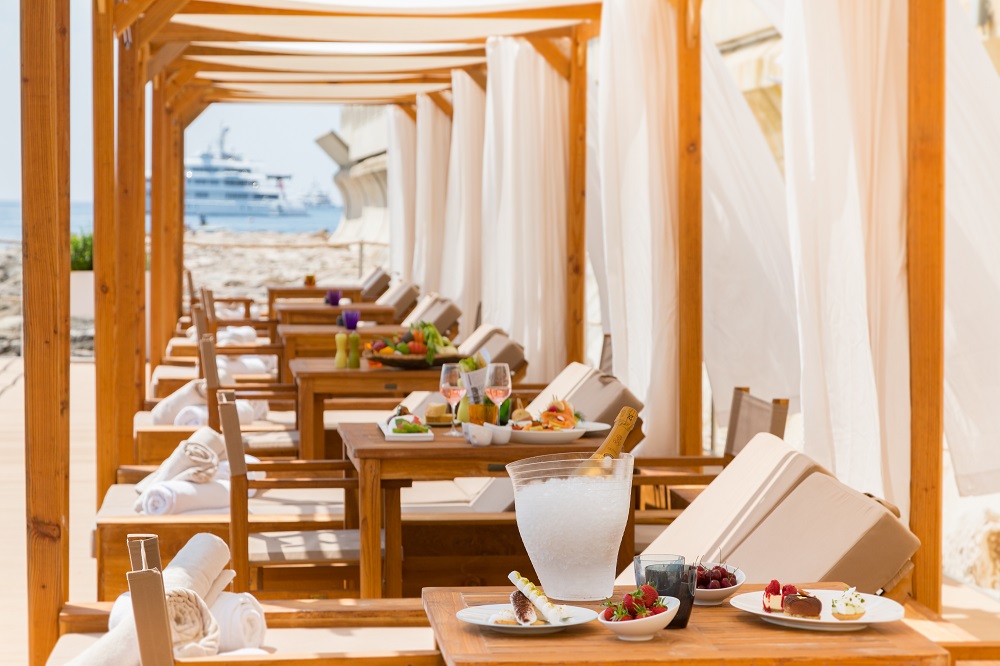 The Monte-Carlo Bay Hotel & Resort has 334 rooms with 75% of them boasting sea views. The hotel is designed with a neo-classical architecture featuring arcades and colonnades, and rooms that range from luxury suites and duplex apartments. It also offers facilities for business events, featuring modular rooms to adapt to meetings, congresses, seminars, product launches, and press conferences.

Situated in the east of the Larvotto peninsula on Avenue Princesse Grace, the resort offers premium views of the Mediterranean, Roquebrune-Cap-Martin and the Monte-Carlo Beach complex. Surrounding the property are 4 hectares of gardens designed by Jean Maus, three restaurants, nightclubs, casinos and a concert hall.