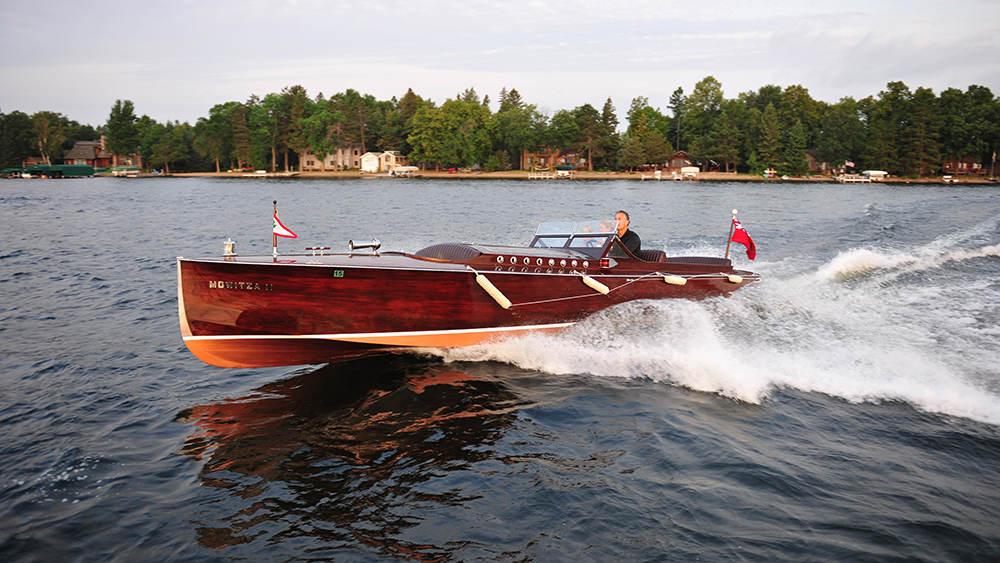 Not all vintage-boat owners have inherited their vessels. Two Minnesota neighbors are among those who seek out old beauties instead—and who have amassed staggering collections of classics.

When Lee Anderson bought his first antique boat, a 1938 Chris-Craft Resorter, in 1985, he named it after his wife, Katharine. “When I was a boy, my dad had a wooden boat on the lake in northern Minnesota where we spent the summers,” says Anderson, 82. “I always wanted one. After Katharine, I kind of got the bug.”

Forty-five boats later, Anderson still owns the 19-footer—which he describes as “not terribly valuable” but one he’ll never sell—as well as the definitive collection of vintage North American boats, with many valued in the millions. Anderson is now focusing on pre–World War II one-off race boats, such as the 1924 Baby Bootlegger, which won the American Power Boat Association Gold Cup in 1924 and 1925, and storied models from then rock-star builders, including Gar Wood and Hacker, and even rarer Canadian mahogany brands. To make the cut, a boat must have a history so intriguing that it makes other collectors jealous. “Scarcity is what’s important to me,” he says.

Anderson houses 10 vessels in a special wing of his home on Gull Lake, Minn., that doubles as a showroom, with tracks that lead down to the shore so he can launch them during the summer. He keeps 12 others in the water under canopies. “I don’t like the boats to not be used,” he says. “I try to keep them all going every summer.” Anderson is regularly seen piloting two or three different woodies per day around the lake.

On the same chain of lakes lives John N. Allen (the men’s Naples, Fla., homes are close by each other, too), who also owns one of the country’s largest and rarest collections of classic wooden boats. “I’d see Lee running those boats before anyone else was interested, and it kindled my interest,” says Allen, 67. His first acquisition: a 1929 Gar Wood triple-cockpit in 2001. “That was 29 boats ago.”

Allen’s collection includes the two oldest Chris-Crafts in existence—both dating to 1922—and a 1926 Gar Wood 33-foot Baby Gar called Bolo Babe, powered by a V-12 Liberty engine. He’s now restoring Teaser, an almost 40-foot-long fast commuter that in 1925 beat the 20th Century Limited train in a race along the Hudson from New York City to Albany. Allen declines to pick his favorite, though it might be easy to guess. “Princess Paige is a 1926 Earl C. Barnes named after my only daughter,” he says. “It’s the closest thing I’ve ever seen to a jewel box on the water.”

Allen considers himself a steward of the rare treasures. “So many valuable boats have been destroyed over the years,” he says. “I take a lot of pleasure in restoring them and moving them into the future.”