Asia Yachting kicked off 2021 in lively fashion as the regional dealer hosted the Asian ‘reveal’ of the MCY 70 Skylounge online from Hong Kong and continued private viewings of the eye-catching new model.

Like all Monte Carlo Yachts models, the Skylounge Collection is designed by Carlo Nuvolari and Dan Lenard of Venice-based Nuvolari Lenard. The duo’s principal remit was to create an elegant enclosed flybridge, a rare feature on Italian-built motor yachts of this size, and also use it to house the yacht’s sole helm station.

Last year, Skylounge versions were released for the MCY 70 and MCY 76, two of three models (along with the 66) introduced in 2019 as Monte Carlo Yachts unveiled its ‘second generation’ of yachts for its second decade. 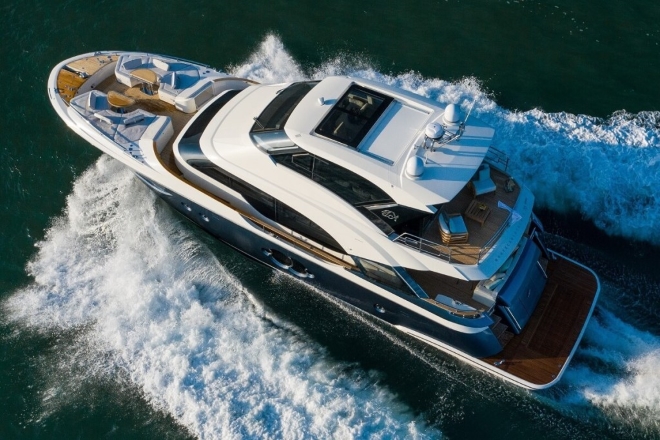 Initially targeted at the US market, the MCY 70 Skylounge debuted at the Miami Yacht Show last February before the first model in the region arrived in October in Hong Kong, where it’s expected to have a similar appeal in a climate featuring cool temperatures in winter and extreme humidity in the summer. And as usual, Asia Yachting has specified options and customisations to appeal to local tastes.

The range name highlights the yacht’s most special feature – its fully enclosable and beautifully outfitted skylounge that occupies most of the flybridge. 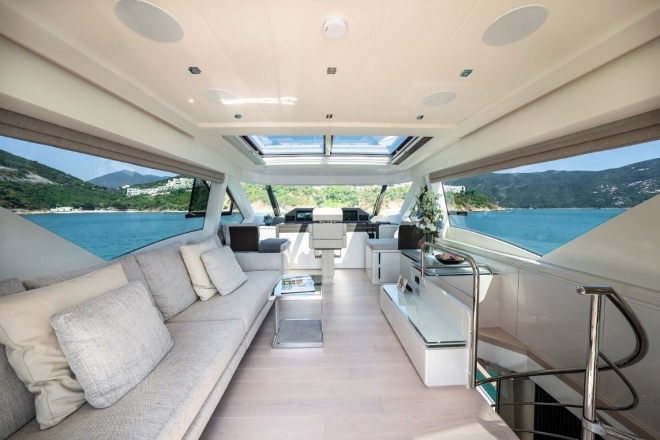 The spacious skylounge includes huge side windows, a retractable skylight, the sole helm station, and stairs to the saloon on the main deck

MCY’s Skylounge Collection was conceived to provide a new concept for international markets, a yacht that can be enjoyed all year round, with an internal stairwell connecting main and upper-deck interiors that can be sealed and easily heated or cooled.

For the new hull tailored for Asia, the ‘Extra Tropical’ air-conditioning option was one of the boxes ticked by Olivier Besson, CEO and founder of Asia Yachting, which represents the boutique, high-end Italian builder in Hong Kong and Macau, as well as Indonesia, Malaysia, Thailand, Singapore and the Philippines. 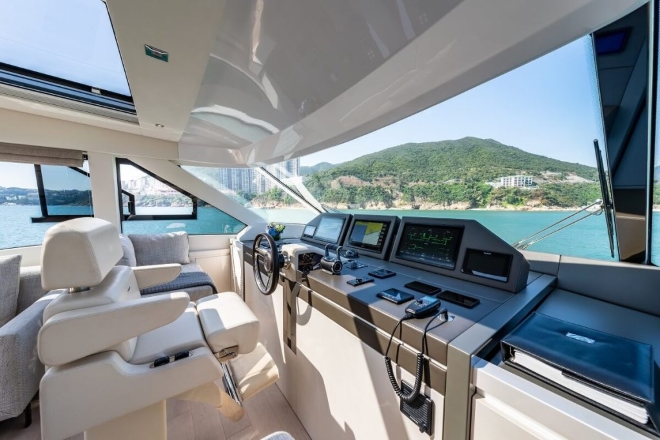 “This is one of the most important features that we know local owners appreciate,” he says. “Owners are keen to escape the high humidity we have in Hong Kong and in other parts of Asia. When you sit upstairs you feel as if you are inside, but because of the panoramic windows and the glass roof (a retractable skylight), you feel in touch with nature and the environment outside.

“When the yacht arrived, I was particularly impressed by the cosy feel of the intimate terrace at the back of the flybridge – great for two people or a couple to relax and have a private moment. It would be a good spot to enjoy a cigar.” 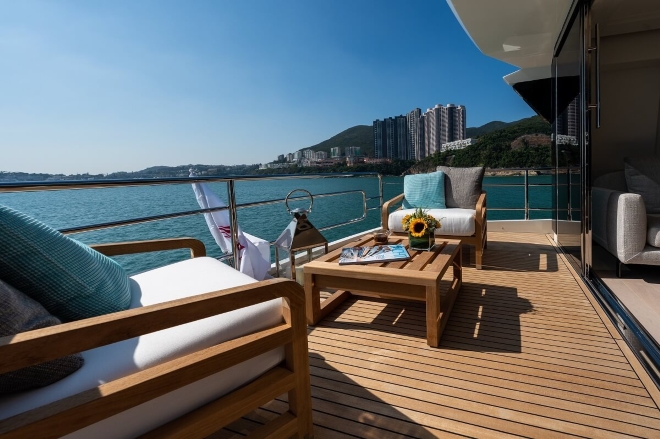 The aft deck of the flybridge is a cosy nook, like a balcony for the skylounge

The enclosed upper deck really does benefit from its surround glazing, whether seated on the long, roomy sofa or the lounging platforms either side of the leather central helm seat. The pilot has superb, uninterrupted visibility around the boat, and the control switches and screens are generously spaced – and why not? After all, this is the sole helm aboard, so freeing up more usable space below.

The Skylounge line’s standard design allows indoor access between the flybridge and the main deck, although it can be customised like most other aspects of all MCY models. If desired, stairwell access can alternatively be positioned outside, from the cockpit.

Like so much of the interior and exterior design by Nuvolari Lenard, the spiral, reinforced glass inner stairwell is a talking-point feature that oozes both elegance and functionality – its transparency allows the perception of yet more space. But volume is not something the main saloon is short of, as there is no helm across this split-level area. 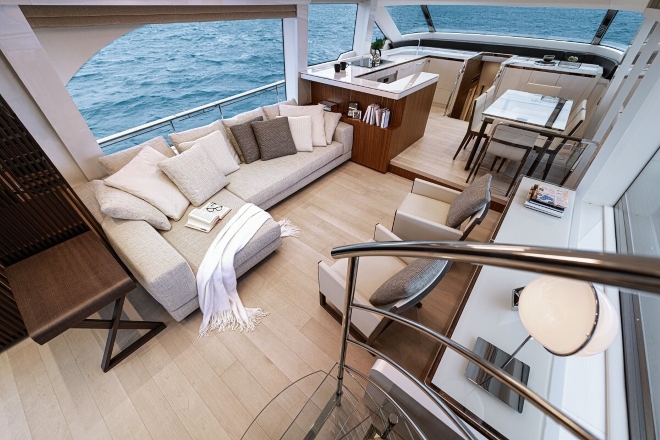 View of the main deck from the skylounge stairs

As such, Asia Yachting opted for a galley-up configuration to port of the upper level forward, facing the dining suite to starboard. This showpiece galley wants for nothing, with two sets of fridge-freezer drawers, a cooking station, storage and dishwashing units that rival many high-end domestic kitchens.

“We took the galley-up option to make it a part of the décor and lifestyle for those aboard,” Besson says. “It’s a place where owners can chat to those on board easily, and people can stand around and share food and drinks in a relaxed, comfortable way.”

Next to the dining table is a thoughtfully-placed weather-tight door to the starboard side deck that leads to the bow or cockpit – handy for underway manoeuvres, carrying food or drink from the galley, or for simple access. A step down to the aft half of the saloon is a sitting area with a long, deep L-shaped sofa and armchairs covered with Hermès and Armani Casa fabrics, as is the case on seating throughout the boat. An oversized TV in the ceiling panelling can be lowered or concealed at the press of a remote-control button.

To port, just inside the cockpit doors, is a day head carefully concealed behind dark chocolate brown-coloured wooden louvred slats. This space can be alternatively configured as a storage room or for access below deck to crew quarters and storage for the water toys.

While the new Skylounge Collection focus may be on the interconnected indoor areas, the breezy, completely sheltered cockpit is another comfortable gathering or solo spot at a marine-teak dining table, with its elevated view out to sea over the swim platform at the stern. 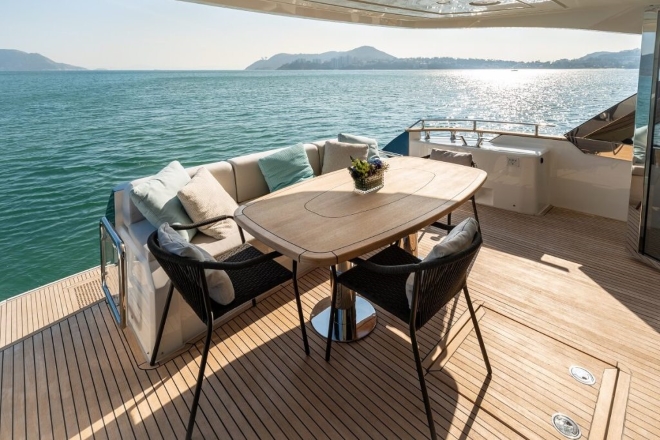 The aft cockpit on the main deck

Shower facilities are concealed in cabinetry in one of the twin staircases that lead downward, while the rear platform provides access to the airy engine room, which also leads to the twin crew cabin that provides a buffer between the engines and master suite.

Up front, the large 124sqft (11.5sqm) foredeck is a signature MCY feature, an attractive, comfortable area distinguished by its central passageway. Lowered bulwarks allow great sea views from the sun pads, which are fitted with pop-up recliner back and head supports. 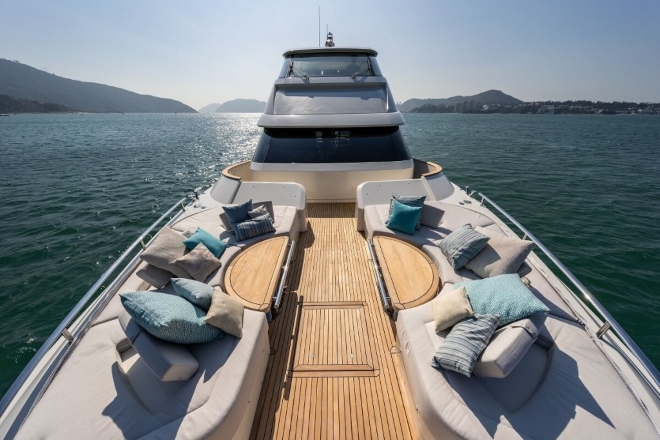 The yacht features a flexible foredeck

The semi-circular teak dining tables on each side are electrically adjustable and can be linked by an extension panel to create a substantial dining surface for up to 10 people. Asia Yachting opted for a bimini on the bow, which can be easily put up to offer shade to those on deck.

A dedicated stairway at the aft of the saloon leads to the master suite via a corridor that’s also home to two washer-dryer machines on the lower deck. Light floods into the main bedroom area through the shipyard’s iconic and newly-enlarged overlapping circular windows, and the cabin makes full use of the midships beam of 17ft 10in (5.45m). 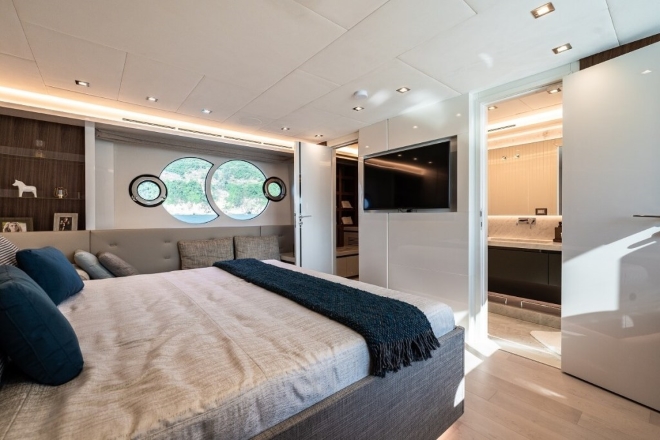 The guest cabins have separate access via another walkway from the forward end of the saloon. Two compact twin cabins feature berths that can be joined to make a double bed. The port twin has ensuite access to a bathroom, while the starboard version uses the same but with corridor access. 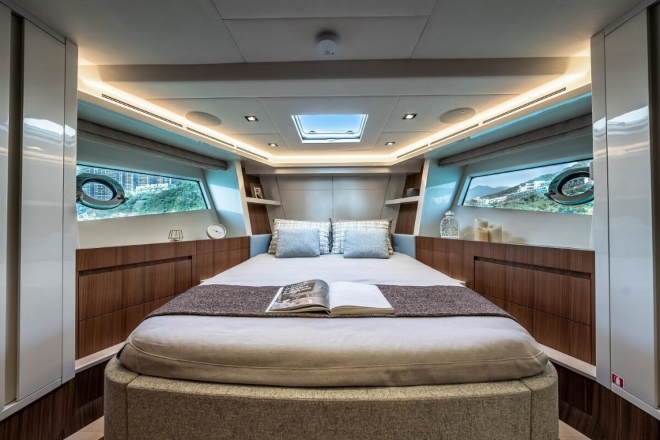 The VIP cabin is in the bow, forward of two convertible twin guest cabins

A VIP ensuite cabin at the bow has decent natural light from panel windows and plenty of hanging and storage space. Like everywhere else on board – including the engine room – headroom is notably generous.

Since Asia Yachting started staging private viewings of the new model, Besson says visitors “appreciated the new interior design that we made luxurious and bright, plus they liked the additional living space upstairs, which matches their needs for shelter and cool temperatures”.

Following the global launch of the MCY 70 Skylounge last February, the MCY 76 Skylounge made its world premiere at the Fort Lauderdale International Boat Show in October, with the yard indicating that an even bigger version is to follow.