Maison Martell unveils the ‘Be The Standout Swift’ campaign with a video directed by internationally acclaimed artist, photographer and film director Wing Shya, featuring renowned fashion designer Angel Chen. Inspired by the Chinese idiom “The Bird That Stands Out Gets Shot Down”, the “Be The Standout Swift” campaign soars to encourage people to unlock their audacity, and challenge convention so legacy will follow and open the way for others.

As the face of the campaign, Chen who is known as one of the most prominent Chinese designers of her generation has redefined traditional ideas of oriental beauty. The Shenzhen-born fashion designer embodies the “Standout Swift” with her bold and colourful signature style that amalgamates ancestral Chinese leitmotifs with contemporary Western aesthetics. This ‘East meets West’ sensibilities backbone her audacity to push culture, the norm, communities, and the world forward.

Chen also believes in bold self-expression. As written in her narratives, she is known to experiment with colour and form as she keeps her front and centre in the world of style. Her codes of aesthetics are also expressed eloquently in Netflix’s Next in Fashion, where she competed alongside teammate and eventual winner, Minju Kim as part of the show’s loveable “Dragon Princess” duo.

As a young designer, Chen is a pioneer of avant-garde fashion. She has her collections showcased at international fashion weeks from Shanghai to Milan, and collaborates with major global brands across the globe.

The ‘Be The Standout Swift’ campaign was developed to appeal to a new generation of consumers who dare to take risks, by redefining the Chinese proverb “The Bird That Stands Out Gets Shot Down” (槍打出頭鳥) that anchors the message behind the multi-channel campaign. Unlike any other birds, the swift spends almost its entire life in the air, barely ever touching the ground. It soars over land and sea, knowing no frontiers. As the ultimate signifier of the House’s audacity and freedom, the swift is represented on all Martell bottles, labels and cases shipped around the world. 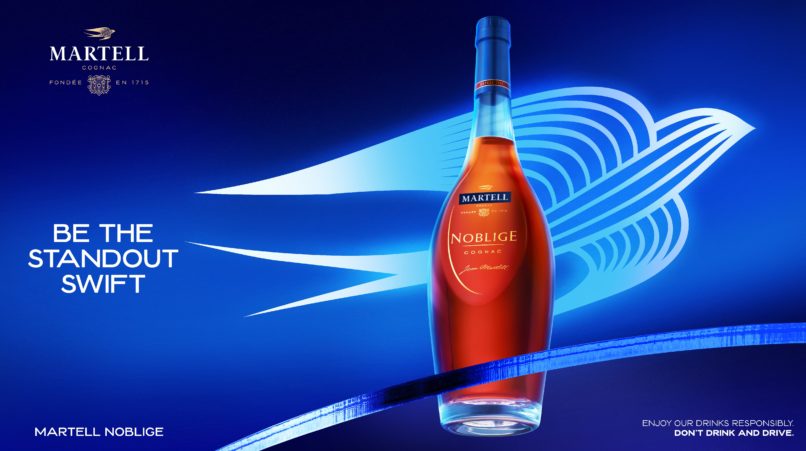 Martell Noblige has been chosen as the heart of this new global advertising campaign because it epitomises the free and audacious spirit of the House. With its elegant and cutting-edge design, Martell Noblige’s complex blend transpires the marriage of strength and smoothness. Like the swift, it combines the savoir-faire of Maison Martell with energy, intensity and attitude all of its own. A statement-making cognac, Martell Noblige is the “Standout Swift”.

The post Maison Martell’s iconic swift serves as inspiration for its ‘Be The Standout Swift’ campaign appeared first on Lifestyle Asia Kuala Lumpur.