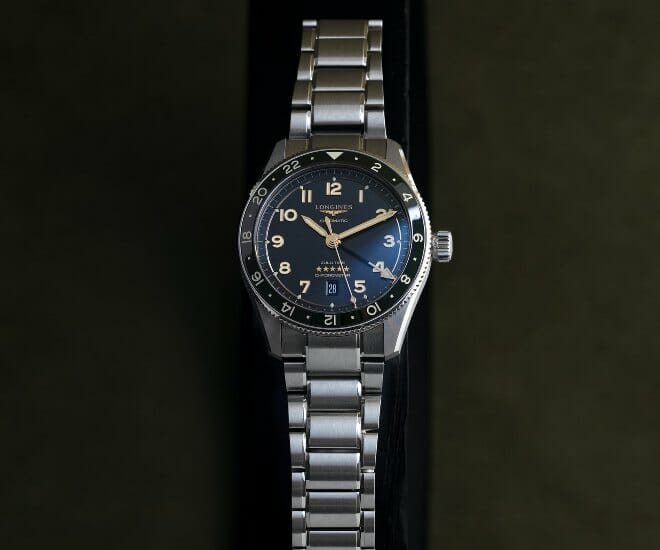 The Longines Spirit collection was created to exalt the glory days of aviation, where intrepid flyboys embarked on legendary exploits in the skies. We first covered the collection on its debut in 2020 in issue #59, with time-only and chronograph models. The story is moving on nicely this year, with fresh complications and yet more daring explorers, Clyde Pangborn and Hugh Herndon Jr. They completed the world’s first non-stop flight from Japan to the United States in 1931.

For their 41-hour trip across the Pacific Ocean, Longines furnished the American aviators with a special cockpit clock equipped with double hour and minute hands and two concentric 24-hour dials. This technique of indicating different time zones was first developed by the watchmaker for the Ottoman Empire (today Turkey) in 1908, and from the cockpit clock it was modified to fit onto the wrists of pilots who set out to cross time zones.

Fast-forward to the present, it was only a matter of time before a GMT model took flight in the fledgling Spirit fleet. The new Spirit Zulu Time bears the same moniker as the first Longines dual time zone watch from 1925, which featured the Z flag on its dial. Derived from the NATO phonetic alphabet, “Zulu” or “Z” time designates universal time in military and navigational settings, arenas in which Longines has played a pioneering role.

The Spirit Zulu Time takes a modern approach to Longines’ century-old expertise in tracking multiple time zones, using a 24- hour hand in conjunction with a bidirectional rotating bezel graduated over 24 hours. Local time is adjusted independently, granting the watch “true GMT” status. The time zone mechanism is powered by an in-house automatic calibre that is equipped with a silicon balance spring, COSC chronometer certification, and 72 hours of power reserve — outstanding performance qualities that are reflected in the five stars stamped on the dial.

Outfitted in a 42mm stainless steel case, the Spirit Zulu Time is handsomely styled with matte black, sandblasted anthracite or sunray blue dials and matching coloured ceramic bezel inserts. It achieves a contemporary look without losing any of its retro flyboy charm, which is certainly more engaging than the countless conventional tickers sporting generic vintage cues. If the stainless steel bracelet becomes too utilitarian, simply switch to the interchangeable brown, beige or blue leather strap to enliven the mood.