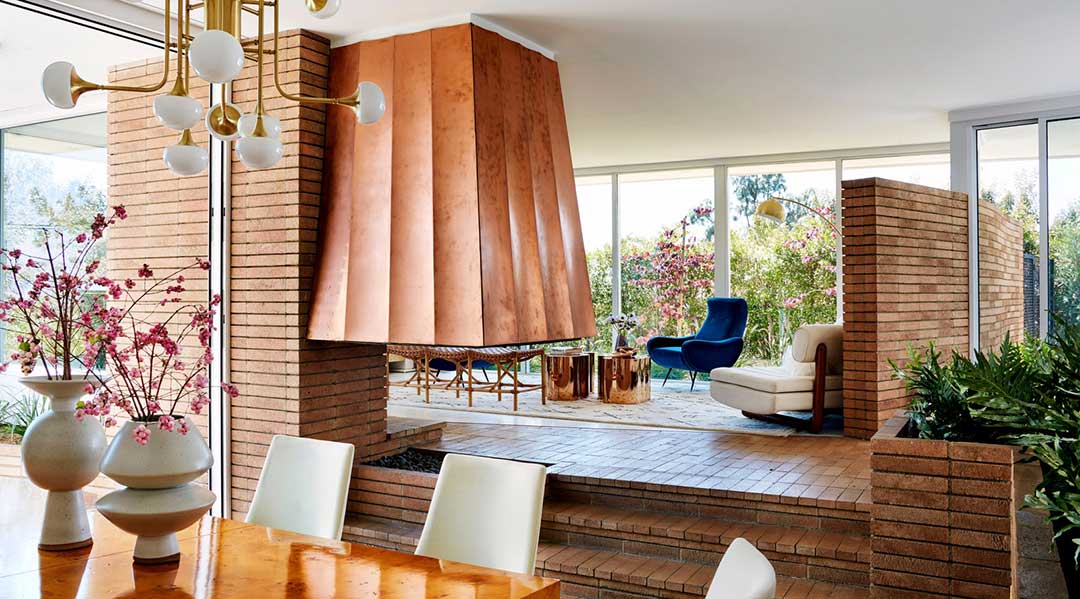 Nothing gets our nosey selves going more than a peek at celebrity homes.

In recent years, Architectural Digest house tours have been the best way to gauge the home tastes of famous people. The iconic magazine’s Youtube-based output is a fun way to look at how celebrities feel and think of their spaces.

Below are some of our favorites.

Actress Dakota Johnson, best known for her star-making turn on the Fifty Shades of Grey trilogy (and for also precipitating the downfall of Ellen DeGeneres) lives in a lovely mid-century modern home in Los Angeles.

Built and lived in by architect Carl Maston, and then owned by Glee creator Ryan Murphy, Johnson describes the house as clean and cozy. Upon initially seeing the house, she told Architectural Digest that her first thought was, “I’ll never want to sell this place.”

Highlights: The kitchen cabinets are painted in Benjamin Moore’s Alligator Alley, an unexpected shade for a cooking space. It ends up having more personality than other basic beige-and-marble affairs. Furniture pieces by Paul Laszlo for Brown Saltzman, Pierce & Ward, and Nickey Kehoe are a mid-century modern lover’s dream. Artwork by David Hockney and photographs by Frank Bruynbroek and Alice Mann speaks of Johnson’s discerning taste.

Multi-hyphenate Mandy Moore, who first burst out into the scene in 1999 with her single Candy, and is currently on TV for the last season of the hit series This is Us, lives in a 1950s-era house in Pasadena. Moore told AD that the first house she bought never truly felt like hers, even if she lived there for 15 years.

This house is the next chapter of her life: “As an adult, a woman, and a performer, I was able to pour all of who I am into making this place.”

The house was designed by Harold B. Zook, and over the years had been added on. When Moore and now-husband Taylor Goldsmith bought the house they decided to subtract, rather than full-on renovate: the intent was to recapture the house’s original spirit. The original drawings provided a guide for architect Emily Farnham to rebuild the cornice rooflines, walls, floor, and fireplace.

Highlights: Terrazzo flooring, velvet armchairs by Mercer 41, rose gold cocktail tables by Statements by J, coffee table by Sarah Sherman Samuel. The floor and walls that surround the fireplace (and the fireplace itself) are made of blond brick, and the copper hood on the fireplace is the original piece, now restored.

According to architect Grant Kirkpatrick of KAA design, Sharapova was involved in every single aspect when it came to building the house and was very firm with how she wanted the house to feel and function from the very beginning of the project, maintaining curiosity in the process that made her a very committed client.

Sharapova says that she was inspired by Japanese architecture and minimalist aesthetics. “For me, uncluttered means healthy,” she told AD. If you don’t use something, you don’t need it.”

Highlights: Artwork by Vuk Vidor, Wang Ningde, and CJ Hendry, a Boffi tub with matching sink fittings, and a Pierre Jeanneret easy chair. Sharapova also has a bowling alley inside her house, with a Chris Gwaltney painting on display.

In a career that has spanned 34 years, actress Kirsten Dunst has seen and done practically everything. It’s no surprise that her ranch house, located in the San Fernando Valley, is dotted with furnishings collected over her life as an actress.

There’s a Frits Henningsen wingback chair purchased during her Mary Jane Watson days in Sam Raimi’s Spider-Man, along with an Elizabeth Peyton portrait of Marie Antoinette, a role Dunst took on in 2006. The latest is a small wooden bird sculpture from Jane Campion, who directed Dunst to an Oscar-nominated role in The Power of the Dog.

Dunst’s longtime interior decorator is Jane Hallworth, who says the actress has an eye for beauty. “For her, it’s not about style or pedigree per se, but that sweet, lovely call of home,” Hallworth told AD. Their first project was Dunst’s first house, a take on the Scandinavian lake house in the Hollywood Hills area. “For that first house, I didn’t lead her to trivial pieces. We didn’t buy much, but what we did buy was the best.”

Highlights: Along with the Henningsen and the Peyton portrait from that first house, there’s a set of steel Gio Ponti chairs and a Baguès crystal chandelier. The living room has a pair of Erik Karlström club chairs and a Philip Arctander clam chair. In the living room is a Swedish secretary desk from Hovdala castle, constructed in the 16th century. In the kitchen, there are aubergine tiles and a Pierre Jeanneret stool. Dunst’s husband, actor Jesse Plemons also owns an antique parlor organ said to have belonged to the Beach Boys’ Brian Wilson.

Instagram’s director of Fashion and Shopping Partnerships Eva Chen, her husband Tom Bannister (an advertising creative director and occasional granola king), and their three children Ren, Tao, and River live in New York City. But on the weekends and long vacations, the family decamps to their Connecticut country house for relaxation.

A contemporary Cape Cod house that measures 2,800 sq feet on 10 untamed acres of land, Chen says the house felt right at first viewing. “I could tell another family had been happy here,” she told AD. The couple hired Hendricks Churchill to update the house. The goal was to make it warm, elegant, and not too precious.

Highlights: The living room has a vintage Paul McCobb cocktail table, and Vitsœ shelving to hold Chen and Bannister’s extensive book collection. On the wall is a framed Joan Miró artwork and Ali Beletic painting from Tappan Collective. In the dining room, Antoinette Poisson wallpaper brightens the walls. A Camelonda sectional from B&B Italia completes the attic play area.