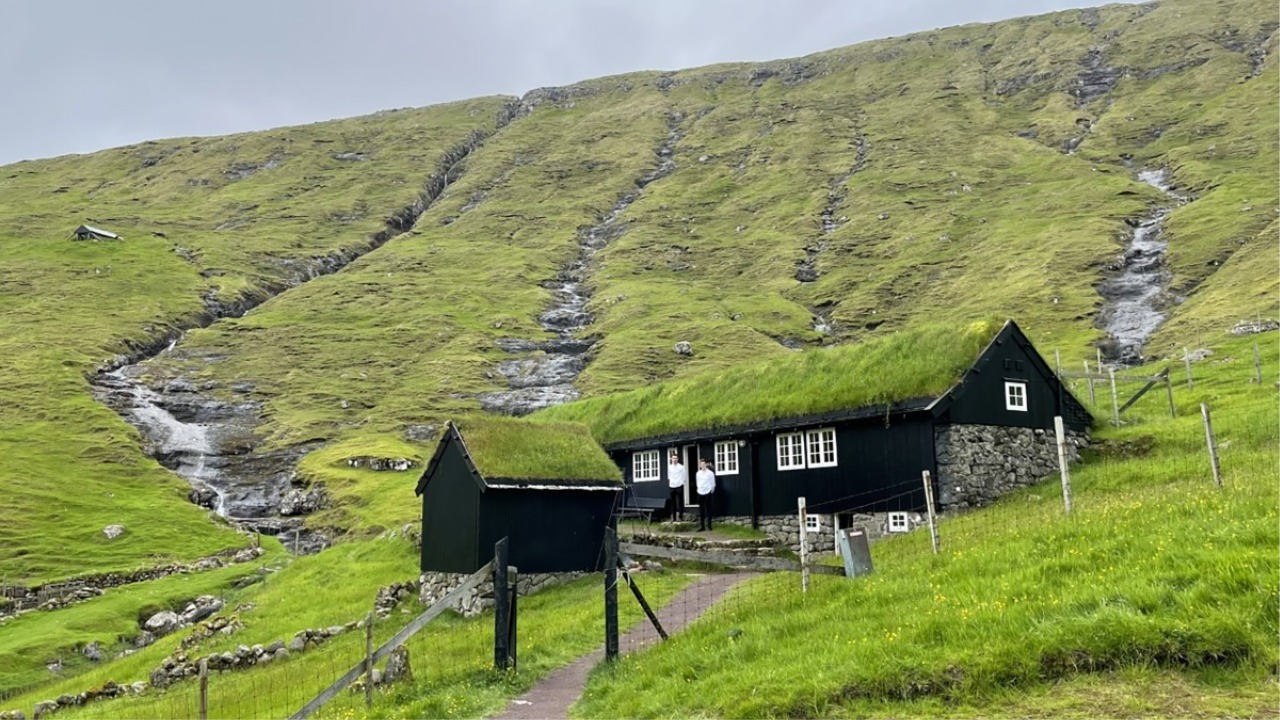 The wind was howling and the heavy grey clouds looked low enough to grab when I arrived at the lot where I’d been instructed to meet the team from KOKS. It was completely empty, other than my fun-sized rental car and a pair of shaggy black sheep who were inching their way toward the whitecapped waters of Leynavatn. I stared through the windshield, realising that it doesn’t take long to get almost desensitised to how beautiful the Faroe Islands are, even when the weather is at its moodiest. Especially then.

You definitely run out of synonyms for “green,” should you need to describe the vibrantly rugged scenery that surrounds you as you drive from island to island. The word “verdant” was lighting up the left hemisphere of my brain when a Land Rover materialised on the dirt path that traced its way around the edge of the lake.

When the driver opened the door, I climbed in and buckled up before we bounced from rut to rut on the way back to the restaurant. Yes, the restaurant — and the scuffed plastic Michelin Man sitting on the SUV’s centre console isn’t just for show.

Most remote Michelin-starred restaurant KOKS is moving to Greenland

KOKS is the first Michelin-starred restaurant in the Faroe Islands, an 18-island archipelago that sits in the north Atlantic between Iceland and Scotland. It was awarded its first star in 2017, and added a second star two years later. It has been called the world’s most remote Michelin star dining experience — and, yes, that tracks — but it’s about to move about 1,300 miles (2,092 km) further afield.

Earlier this month, KOKS announced that it would be relocating the restaurant to the west coast of Greenland for the summer seasons of 2022 and 2023, where head chef Poul Andrias Ziska will take over the restaurant at Ilimanaq Lodge in the 53-person village of Ilimanaq. Overnight guests at the lodge will have the option of experiencing the 17- to 20-course KOKS tasting menu during their stay; other visitors can try to score one of the remaining reservations for the restaurant, which will seat only 30 people each night.

Ziska told Bloomberg that his approach won’t change, even though the scenery out the windows will. He’ll continue to forage for wild berries, flowers, and herbs, and the menu will still largely focus on “the clean, pure flavours of the ocean.” The biggest difference will be the addition of wild game, including seal.

Of the 17 courses that I experienced, the only two that weren’t pulled from the sea were the Faroese goose tartare and the fermented lamb. The others ranged from a savoury disc of deep-sea crab topped with caramelised onion foam and pickled elderberries, to a century-old Mahogany clam served with kombucha, elderberry flowers, and fermented gooseberry seeds, and a fermented ocean perch, grated over potato puree and fermented lamb tallow. (Fermentation is an important — and, at times, essential — part of traditional Faroese cuisine).

One of the desserts was made from limpets, which Ziska was excited about serving. “We’ve had it before, but not in the same way,” he told me last summer. “Limpets can be chewy and hard to eat, so we made a stock out of it that we reduced down with caramelised carrots and caramelised seaweed. We made it into a cream that we put back into the limpets’ shells, and the guests have to lick it out of the shell. Eating it is a very fun experience.” This story first appeared on www.foodandwine.com.

The post KOKS, the world’s most remote Michelin-starred restaurant, is moving even farther out appeared first on Prestige Online – Singapore.