The deadly exchange of fire between Palestinian militants in the Gaza Strip and the Israeli military has escalated significantly, with the UN fearing a “full-scale war”.

More than 1,000 rockets have now been fired by Palestinian militants over 38 hours, Israel said, most at Tel Aviv.

Israel has carried out hundreds of air strikes, destroying two tower blocks in Gaza on Tuesday and Wednesday.

At least 43 Palestinians and six Israelis have been killed since Monday.

That includes 13 Palestinian children caught up in the conflict.

UN Secretary-General António Guterres said he was “gravely concerned” by the ongoing violence.

The latest fatality was an Israeli citizen, who was killed when an anti-tank guided missile, fired from the northern Gaza Strip, struck a jeep on the border. Three other people were injured.

The Israeli fatalities also reportedly include a 52-year-old father and his 16-year-old daughter who died in the city of Lod near Tel Aviv when a rocket hit their car.

In Gaza, the streets are full of rubble where buildings have collapsed and cars are crushed or burned from Israeli air strikes.

Israeli Arabs have also staged violent protests in a number of Israeli towns. Lod near Tel Aviv has been put under a state of emergency.

The fighting follows weeks of rising tension stoked by violent confrontations between Israeli police and Palestinian protesters at a site in Jerusalem that is holy to both Muslims and Jews.

Israel’s military says this is the biggest exchange since 2014.

Of the 1,050 rockets and mortar shells that have now been fired from Gaza, 850 had landed in Israel or were intercepted by its Iron Dome air defence system, and 200 failed to clear the border and landed back in Gaza, the Israeli army said.

Video footage from the city showed rockets streaking through the night sky, some exploding as they were hit by Israeli interceptor missiles.

Loud booms and air-raid sirens were heard across targeted cities, which included Tel Aviv, Ashkelon, Modiin, and the southern city of Beersheba, as Palestinian militants tried to overwhelm missile defences.

Anna Ahronheim, the defence and security correspondent of the Jerusalem Post, told the BBC: “To hear hundreds of interceptions and even to hear rockets fall near us was horrifying.”

The rocket fire escalated after the two residential tower blocks were brought down in Gaza. Israel said it was targeting rocket launch sites, high-rise buildings, homes and offices used by Hamas, the militant group that rules Gaza.

Hamas said it was incensed by “the enemy’s targeting of residential towers”.

Residents had been warned to evacuate the buildings before the fighter jets attacked, however health officials said there were still civilians deaths.

Fady Hanona, a journalist in Gaza City, tweeted a video he said showed explosion after explosion in Gaza on Wednesday morning.

“What is happening is unbelievable,” he said. “What we experienced this morning was more war than what we lived during the last three wars.”

The international community has urged both sides to end the escalation, amid concerns it could spiral out of control. The UN’s Middle East peace envoy, Tor Wennesland, said the sides were “escalating towards a full-scale war”.

Mr Guterres urged “a redoubling of efforts to restore calm”.

The chief prosecutor of the International Criminal Court (ICC), Fatou Bensouda, said she was watching the developments with “great concern” and that there might be crimes being committed under the ICC’s guidelines, which focus on crimes against humanity.

Spoke with @Gabi_Ashkenazi today about the ongoing situation in Israel including rocket fire emanating from the Gaza Strip. Israelis and Palestinians need to be able to live in safety and security, as well as enjoy equal measures of freedom, security, prosperity, and democracy.

“Terror organisations have been hit hard and will continue to be hit because of their decision to hit Israel,” he said. “We’ll return peace and quiet, for the long term.”

Hamas leader Ismail Haniyeh said in a televised address: “If [Israel] wants to escalate, we are ready for it, and if it wants to stop, we’re also ready.”

Protests by Israeli Arabs in Lod escalated to full-scale rioting, with protesters throwing rocks at police, who responded with stun grenades.

The violence caused Israeli Prime Minister Benjamin Netanyahu to declare a state of emergency in the city on Tuesday night. It was the first time the government had used emergency powers over an Arab community since 1966, The Times of Israel said.

Mr Netanyahu, who went to the city to call for calm, said he would impose a curfew if necessary.

Israeli media reported that synagogues and several businesses had been set on fire, while Reuters news agency said there were reports a car driven by an Arab resident had been stoned.

“All of Israel should know, this is a complete loss of control,” Lod Mayor Yair Revivo was quoted as saying by the Times of Israel. “Civil war has erupted in Lod.”

Ben Gurion Airport, Israel’s main international hub and one of the country’s busiest, briefly halted flights on Tuesday and an energy pipeline between the cities of Eilat and Ashkelon was hit.

There has also been unrest in other cities with a large Israeli Arab population, as well as in East Jerusalem and the West Bank.

It was another hard night for civilians inside Gaza and in Israeli towns on the other side of the border wire. Israel’s next decision will be whether to send troops into Gaza.

The best chance of a ceasefire is from outside mediation, most likely through Egypt.

But at the moment, both Israel and Hamas are ramping up their rhetoric as well as continuing missile and rocket strikes.

There has also been trouble in Israeli towns with mixed Jewish-Palestinian populations. Twenty per cent of Israeli citizens are Arabs. The anger about events in Jerusalem and Gaza has caused communal violence and attacks on property. 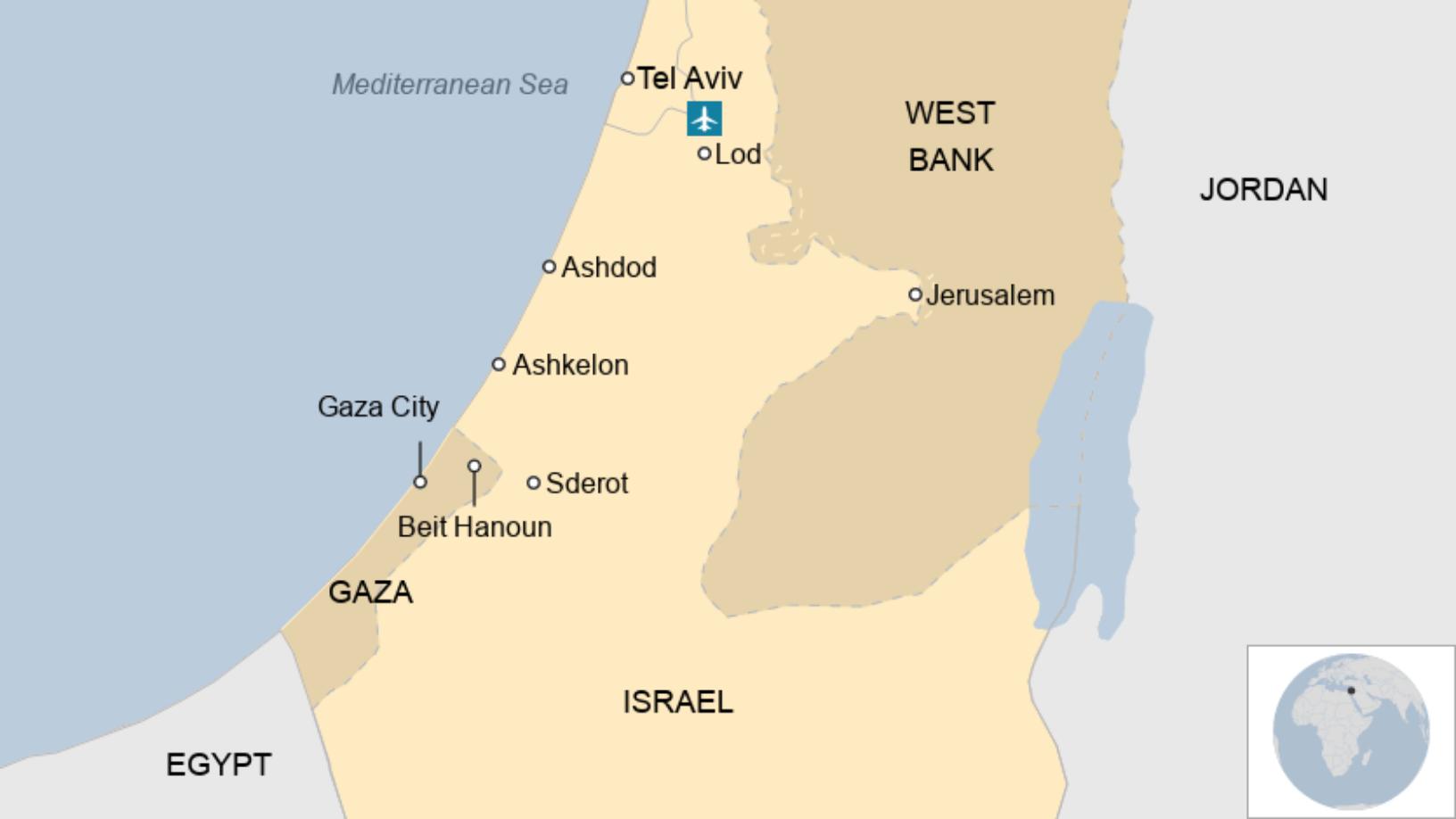 What has caused the violence?

The fighting between Israel and Hamas was triggered by days of escalating clashes between Palestinians and Israeli police at a holy hilltop compound in East Jerusalem.

The site is revered by both Muslims, who call it the Haram al-Sharif (Noble Sanctuary), and Jews, for whom it is known as the Temple Mount. Hamas demanded Israel remove police from there and the nearby predominantly Arab district of Sheikh Jarrah, where Palestinian families face eviction by Jewish settlers. Hamas launched rockets when its ultimatum went unheeded.

Palestinian anger had already been stoked by weeks of rising tension in East Jerusalem, inflamed by a series of confrontations with police since the start of the Islamic holy month of Ramadan in mid-April.

It was further fuelled by the threatened eviction of Palestinian families from their homes in East Jerusalem by Jewish settlers and Israel’s annual celebration of its capture of East Jerusalem in the 1967 Middle East war, known as Jerusalem Day.

The fate of the city, with its deep religious and national significance to both sides, lies at the heart of the decades-old Israel-Palestinian conflict. Israel in effect annexed East Jerusalem in 1980 and considers the entire city its capital, though this is not recognised by the vast majority of other countries.

Palestinians claim the eastern half of Jerusalem as the capital of a hoped-for state of their own.

Are you in Israel or Gaza and affected by these events? Please share your story by emailing haveyoursay@bbc.co.uk.

Please include a contact number if you are willing to speak to a BBC journalist. You can also get in touch in the following ways:

If you are reading this page and can’t see the form you will need to visit the mobile version of the BBC website to submit your question or comment or you can email us at HaveYourSay@bbc.co.uk. Please include your name, age and location with any submission.