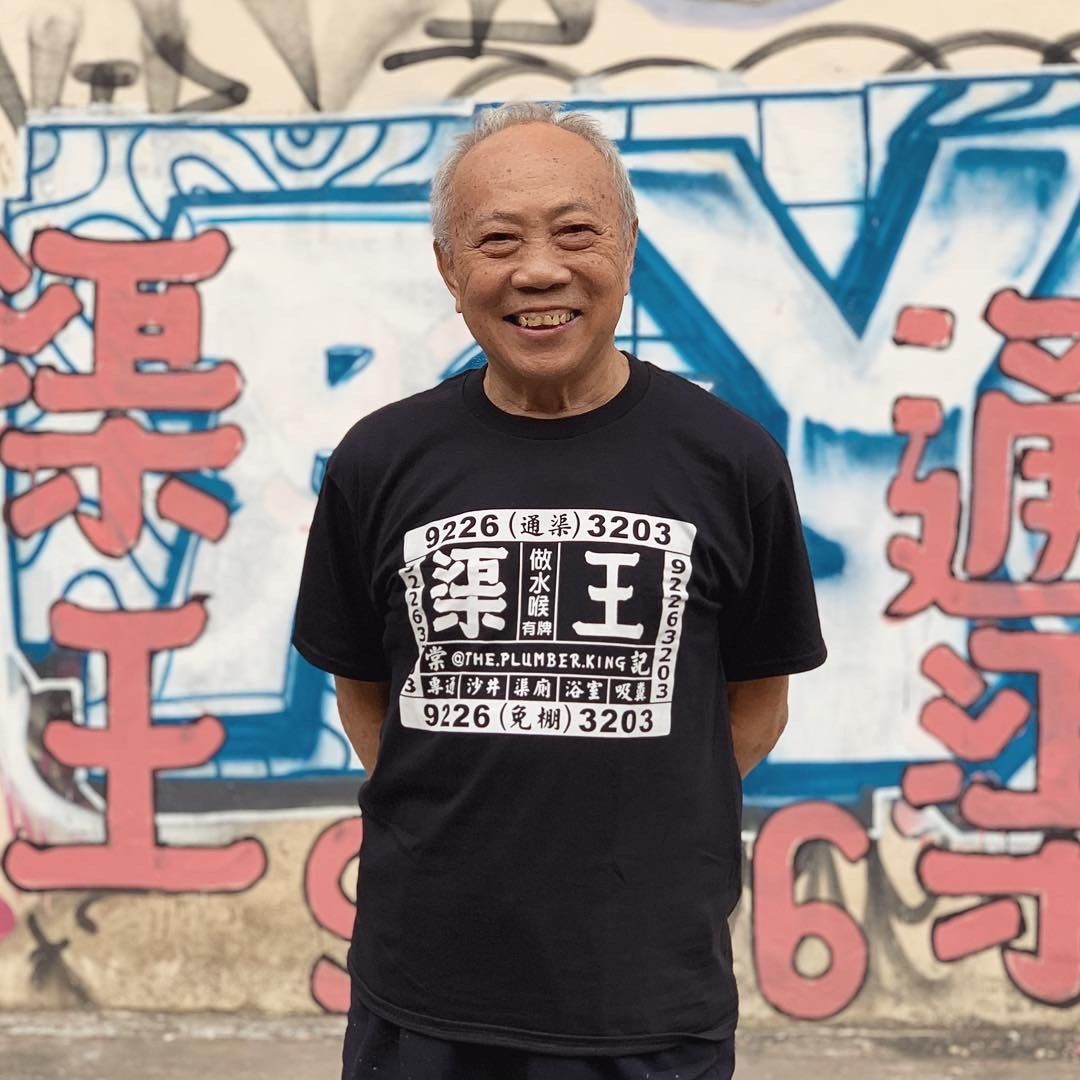 Move over, Banksy. With over half a century of experience painting his way through the city, Yim Chiu Tong, aka The Plumber King, is certified OG among Hong Kong street artists. With a new exhibition happening with Whatever. Coffee in Sham Shui Po, we talk to the man himself about the journey that made him a local graffiti legend.

Not all heroes wear capes; likewise, not all artists have their own studio or strive to exhibit their works at fancy art galleries. Case in point: Yim Chiu Tong, better known by his moniker The Plumber King, who was just a regular plumber in Hong Kong until one day, he wasn’t anymore — he’d become an artist.

Well, strictly speaking, The Plumber King still takes on plenty of plumbing jobs, and his primary income still comes from plumbing. But on the side, in a way completely unexpected to him, he’d gained a new title: street artist and graffiti icon.

Traversing the streets of Kowloon, you’ve probably come across more than a few “Plumber King Advertisements” saying 渠王 (“The Plumber King”) or 通渠 (“clear sewers”). Instantly recognisable by their unique rounded font, sometimes with black outlines and always hand-painted with care, The Plumber King has been tagging the city with his signature calligraphic script since the 1960s.

Sixty years later, he continues to cover every wall that crosses his path — a neverending quest to promote his services as a plumber. And as time has shown, his method works. People remember him and are mesmerised by his simple promotional images. His fame has grown to a point where he is regarded as an iconic Hong Kong street artist in the same vein as the “King of Kowloon”, Tsang Tsou Choi.

This all sounds great, but to really understand the man who is The Plumber King, we’ll have to rewind back to the beginning, before it all started.

Before he grew into his role as The Plumber King, before he’d even begun to tag the city with his name, Yim was simply a young kid who grew up in a small, rural village in Shenzhen. Life back then was, well, very different from life we know now in Hong Kong.

“I was going to school every day, but to make ends meet, I was farming in the afternoons as well,” says Yim. “China was suffering from a famine at the time so it was hard to get by. I barely had anything to eat and spent my time in a constant state of hunger.”

His neighbours would have friends or family send them various food items — flour, he recalls — from across the border from Hong Kong. But he didn’t know anyone in Hong Kong, so he never received any packages. Still, learning of the possibilities in the faraway city, he found himself dreaming of one day crossing the border.

“It was just a daydream. I never thought it would really happen.”

But one day, Yim did end up crossing the border — “accidentally-on-purpose,” he says. When he was around 14, he found himself trekking to Shenzhen with his friend in a bid to get ice cream. By the time they arrived in the Chinese city, night had fallen. Not even daring to think about what they were about to do, the two teenagers lingered for a bit, then headed upriver and approached the border fence.

“It was completely on a whim. We pulled aside the fence and snuck into Hong Kong. We walked all the way to Tuen Mun, then Tai Po, where my friend’s aunt took us in for a bit. Looking back, we were really lucky we didn’t get caught by the police.”

But just because he had made it into the city he had once only dared to dream about, didn’t mean life miraculously got better. The first few days — no, months, and even years, Yim comments — were hard. He managed to find a job at a Chinese restaurant and served dim sum in exchange for HK$6 a day. There, he worked from 3am to 8pm every day. It was tiring and honestly, not a big improvement from farming back in the rural village.

Eventually, Yim ran into some customers at the restaurant who were looking for plumbers. He learned that plumbing was a well-paying job and one that was evergreen — pipes needed to be renewed every three to seven years and there would always be clientele, since Hong Kong was so densely populated.

“So I began apprenticing as a construction site plumber, then eventually made it on my own as a freelance plumber,” he concluded.

Yim didn’t start off painting the streets right away. In the beginning, his advertisements came in the form of business cards, which he’d slot into the letterboxes of residential buildings. He was also handing them out to passersby in areas like Kwun Tong and Tsuen Wan whenever he had free time.

“But it wasn’t an effective method,” he says. “I would make tens of thousands of cards and most of them would go to waste with people throwing them away.”

He thought about printing labels or posters, but not every residential building allowed him to plaster the walls. Plus, the police could rip them up anytime.

Inspiration didn’t strike until one day, in San Po Kong, when Yim passed by a nullah with sloping walls. On them were large, painted advertisements by Chinese medicine practitioners. A lightbulb lit up in his head. “I decided, right there and then, I would paint my advertisements all over Hong Kong.”

Now crowned The Plumber King, Yim’s process is simple when it comes to creating his signature advertisements. He isn’t picky about the brand of paint he uses and just purchases the cheapest bucket he finds in the neighbourhood hardware store.

Then, yielding his new paint bucket and trusty paintbrush, he heads over to wherever there is an empty wall for him to work his magic on. Nowadays, they are mostly in half-hidden alleyways or exterior walls of old Chinese tenement buildings, but nothing too flashy, “as the authorities are getting stricter about graffiti”.

“I just paint wherever I see a space,” says Yim. “Usually I work at night time, because there are fewer people around, and end up having to skip dinner.”

There’s no special formula when it comes to The Plumber King’s advertisements. The colours of his signs are dependent on the colours of their backgrounds. If a wall is grey, he’ll paint with white, sometimes adding on a black border to further emphasise the characters; if a wall is white, he’ll paint with black. As a side note, though, Yim mentions that he has a special affinity for pink, as “women like pink and lots of my clients are women”.

One thing most people are surprised to find out is that Yim does all his signs freehand and rejects the idea of using a template. His characters 渠王 and 通渠, as well as his phone number, are uniquely and consistently his own. For example, he adds an uprise tick to the water element in the 渠 character, bearing no resemblance to any existing font.

As for how long an advertisement takes to paint, it all depends on the size of the sign in question. A small sign takes an hour or so; a bigger one spanning the width of a carpark space takes up to three hours. If he’s commissioning a piece for a collector, then the process takes an even longer time.

“I have to pay particular attention to the spacing and the kerning of my characters,” explains Yim. “Because if a collector likes my work enough to pay for a private piece, I make sure to give special attention to it.”

Needless to say, Yim has achieved what he set out to do with his advertisements. While he isn’t rolling in wealth, he has more than enough to live comfortably. And now, in addition to being a plumber, he’s also stepped into the identity of a street artist. In the past two years, he has worked with HKWalls, Carnaby Fair and other brands or organisations in Hong Kong. He doesn’t make a show about them or seek out these opportunities specifically, but he is always happy to try new things and work with the younger generation.

When asked about his newfound fame, as well as his collaborations, Yim smiles shyly. “I don’t think I’m an artist. I simply do what I have to do to make a living.”

The Plumber King currently has an exhibition, “Plumber King Anywhere Everywhere”, at Whatever. Coffee in Sham Shui Po. Open to the public until 30 June, head over to see his famous advertisements and perhaps even commission one of your own at 172B Tai Nan Street, Sham Shui Po, Hong Kong.

(All images courtesy of The Plumber King)