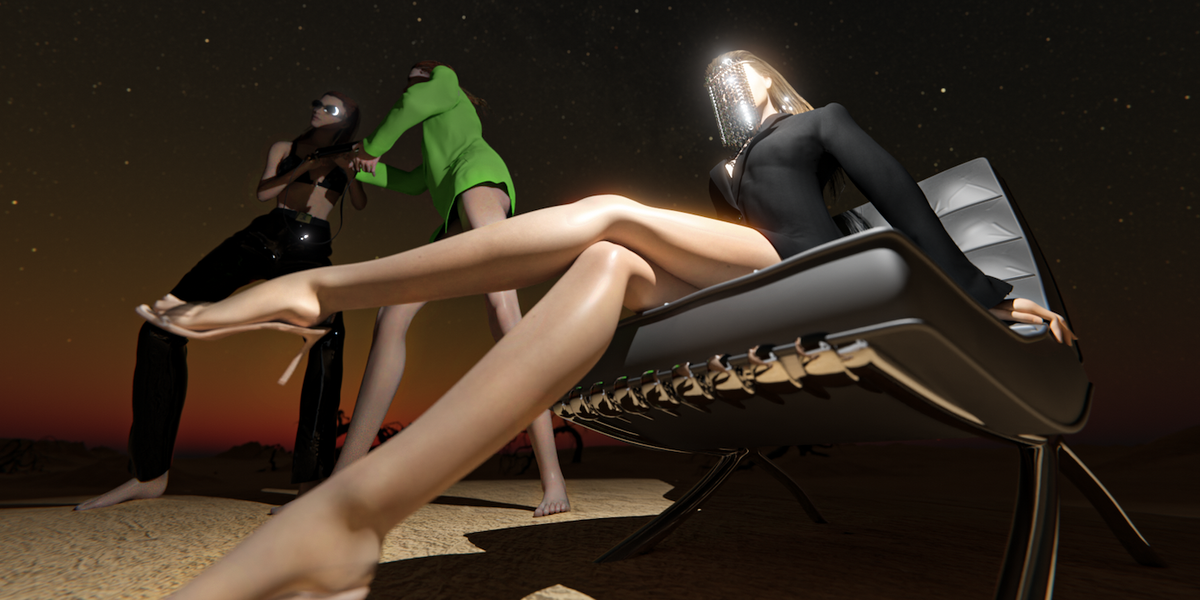 Invariably a symbol of power, ferocity and futuristic fantasy, the bodysuit has been imagined countless times over the decades. Designers David Koma and Sensen Lii tell us about their interpretation of the garment.

What’s the garment of the future? Perhaps we can imagine human life evolving into something resembling a collective consciousness or being transferred into machines, Matrix-style (looking at you, metaverse), eliminating human bodies completely, and the need for clothes — and fashion — with them.

In the near future, however, clothes will remain a convention commanding respect. Science-fiction writers, comic-book illustrators, and costume and fashion designers have predicted garments becoming more streamlined, using bodysuits, leotards and their variations to imagine uniforms for humans in coming generations.

Starting from the mid-20th century, the bodysuit has been synonymous with liberation — mostly sexual — and power. It gave rise to a new generation of femmes fatales who switched liquid gowns and padded jackets for anatomical spandex suits that hugged every curve of their bodies.

Many attribute that cultural shift in costume — and, with it, fashion — to Jane Fonda in Roger Vadim’s cult film Barbarella (though even in this case, the bodysuit was as much means of tool making women more appealing to men).

Much has changed since Fonda’s portrayal of a 41st-century astronaut, so to understand the limits of artistic and functional interpretations of the bodysuit, I spoke to fashion personalities who are changing the genre: David Koma and WINDOWSEN’s Sensen Lii.

How David Koma London and Windowsen are Re-Imagining the Bodysuit

Born in the former Soviet republic of Georgia, fashion designer David Koma started his professional journey at the Saint Petersburg Stieglitz State Academy of Art and Design, where he pursued fine art. It was there he discovered an interest in anatomy and, after visiting morgues and attending autopsies, he dedicated his first fashion collection in the Saint Petersburg fashion week to the subject.

Koma was just 15 years old at the time; his collection was variously described as “daring”, “avant-garde” and “fresh”. He later enrolled at Central Saint Martins to pursue bachelor’s and master’s degrees in fashion and, after graduating, started his namesake label. Four years later, in 2013, he took the helm at Mugler as creative director, a position he stepped down from in 2017.

Both at Mugler and with his own David Koma London label, the designer made waves with obsessively constructed silhouettes that showed the female body intelligently. “I always found the female body immensely inspirational,” he tells me. “Women are the most powerful creatures in the world. Their ability to grow and nurture a child is a true miracle. I love celebrating their bodies.”

As to the notion of Koma Girl as the latest iteration of the femme fatale, he says, “I imagine her as tough yet sensual, free yet controlled, youthful yet mature. She’s a 21st-century femme fatale — strong and confident, with a sophisticated sex appeal.”

The fantasy Koma creates around bodysuits treads the line between performance wear of the highest calibre and unapologetic glamour, not in the ubiquitous manner of athleisure, but rather as CGI-borderline character. It’s couture-meets-RPG avatars in the physical realm, made possible only with a painstakingly architectural approach to garment construction.

One of the looks from his spring/summer 2022 ready-to-wear collection, for example, takes the shape of a one-legged scuba suit with an elegant cutout at the chest — much as the heroine of a sexy spy film à la Æon Flux might wear. Another iteration of the same look — this time encrusted in glistening embellishments – was worn by Serena Williams for the premiere of King Richard late last year.

That collection saw Koma take aquatic inspirations and run with them. “I studied swimming and swimwear,” he says. “There are so many facets to it — athleticism, performance, sensuality. We staged the show at the London Aquatics Centre, designed by Zaha Hadid, so the architecture of the venue — which we chose early in the collection’s planning — became an important part of the overall inspiration.”

Women athletes have had an enormous influence on the evolution of performance-adjacent garments. Koma himself often turns to sports pioneers to inspire his collections — with spring/summer ’22, it was Allette Kellermann who popularised synchronised swimming, and in the case of pre-autumn 2022, its Adeline and Augusta Van Buren, the first women to cross the United States on motorcycles, in 1916.

“They were campaigning for women’s rights but ended up being arrested multiple times on the way for wearing leather riding trousers, which was scandalous at the time,” says Koma.

Although conventionally bodysuits entail highlighting the beauty of the human form, some artists reject notions of physicality almost entirely in their creation of dysmorphic bodycon silhouettes. WINDOWSEN, a young brand based in Shanghai and Antwerp, gives new life to the “alien couture” movement first debuted by Manfred Thierry Mugler in the 1980s.

Corsets and leotards are at the core of many WINDOWSEN collections. Creative director Sensen Lii uses those as starting points and, by introducing sports-inspired and insectile elements, creates mesmerising bestial forms. As a result, the models transform into high-fashion xenomorphs.

“I am a very extreme person,” says Lii. “I believe that our body, no matter in what shape, can be as powerful as a weapon.” The designer credits Australian drag artist Leigh Bowery as his muse, though references from films such as Matrix and various versions of Dracula are also apparent in his collections. “They typically deal with imaginative concepts, with the likes of extra-terrestrial life and parallel universes,” he says.

WINDOWSEN pushes the ideals of genderless fashion through elaborately staged shows and collaborations with celebrities, such as drag performer TAYCE or singer FKA TWIGS. “I think all types of garments are genderless, the bodysuit especially. It’s mostly made of jersey, stretchy fabric that gives it a greater tolerance for any type of body, either men or women, big or small,” says Lii.

While Lii intends his silhouettes to be seen as aggressive, Koma’s approach is somewhat different. “I wouldn’t use the term aggressive,” he says, “I’d say we offer a strong sculptural silhouette with sharp, geometric shapes. I love leather and empowered tailoring. It can read aggressive to some, but it’s never my aim.”

Perhaps influenced by Hollywood, we often equate bodysuits — the closest thing many movies can get to actual nudity — with sex appeal. Indeed, for decades they were a way of dressing for the male gaze. Now, however, the game is changing.

“Your intention of being attractive and the result of appearing attractive are two different things,” says Lii. “It’s about your own will and you can decide for your body.” Now, as comfort is sharing its pedestal with sensuality, and fewer people are willing to sacrifice functionality in the interests of aesthetics, Anna Dello Russo’s “fashion is always uncomfortable” increasingly sounds like a faint echo of the past.

The post How David Koma London and Windowsen are disrupting the bodysuit appeared first on Prestige Online – Singapore.