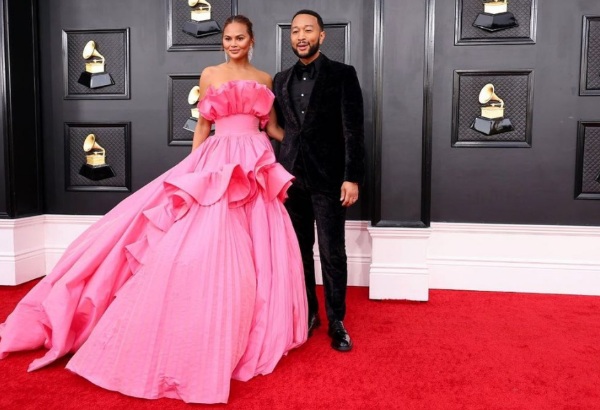 Whip your metallic and fluorescent pieces—these trends are coming in hot!

Compared to the black-tie events of the Oscars and Golden Globes, the Grammys allow attendees more freedom for bolder looks.

READ ALSO: Oscars 2022: The Best Jewelry From The Red Carpet

Held in Las Vegas for the first time instead of Los Angeles, the stars took the red carpet in looks that encapsulate who they are as people and musical artists.

Grammy winner Doja Cat arrived with a glass bag full of candy, while Lady Gaga served old Hollywood glamor. Dua Lipa made an ode to her album title Future Nostalgia with a vintage-inspired Versace dress, and Halsey went the dramatic route with a tilted brim hat by Pierre Cardin.

As for the trends we’ve spotted, we’re seeing Valentino’s Fall 2022 pink collection making its rounds on the carpet and metallics on men and women.

Scroll through for more on our 12 favorite looks from the Grammys in Sin City.

The British-Albanian singer wore an iteration of Versace’s bondage dress from its 1992 fall RTW collection. Previously, versions of the dress were popularized by Donatella Versace and Cindy Crawford. For her 18th birthday, the latter’s daughter, Kaia Gerber, also wore the leather corset dress to celebrate her entrance to adulthood.

The singer went for a dramatic look by Pressiat for her first Grammys since 2017. Halsey shared that she went through endometriosis surgery three days after her last awards show attendance on her Instagram page. This year, she arrived at the Grammys three days post-op.

Although House of Gucci’s Lady Gaga didn’t wear the Italian brand, she reminded us of old Hollywood glamor with a black and white Armani Privé gown. The Shallow singer also wore Armani in last month’s SAG Awards. Her jewelry is by Tiffany & Co.

The singer who performed the hit Peaches with Justin Bieber and Daniel Caesar at the awards show wore a shimmering Chanel ensemble on the carpet.

The model and wife of Grammy nominee Justin Bieber kept it minimal with a white gown from Saint Laurent’s Winter 2022 collection. Her dainty jewelry pieces are by Tiffany & Co.

The winner of this year’s best pop/duo group performance for her song Kiss Me More with SZA wore a gown and shoes by Versace. Doja Cat is accessorized with plenty of diamonds, from rings by Jacob & Co. to necklaces, bracelets, and earrings from D’Orazio & Associates.

But what’s that in her bag, you ask? The Say So singer came with a glass bag full of candy and a bedazzled JBL speaker hanging from it.

Before he took the stage to perform his hits Industry Baby and Montero, Lil Naz X walked the carpet in a detailed Balmain look, complete with butterfly details on the front and the sleeves.

The actress of West Side Story (2021) arrived in an off-shoulder custom Dior dress. Although the tulle fabric was a muted shade, its lightness allowed for movement, showing off the hems’ intricate bias-cut.