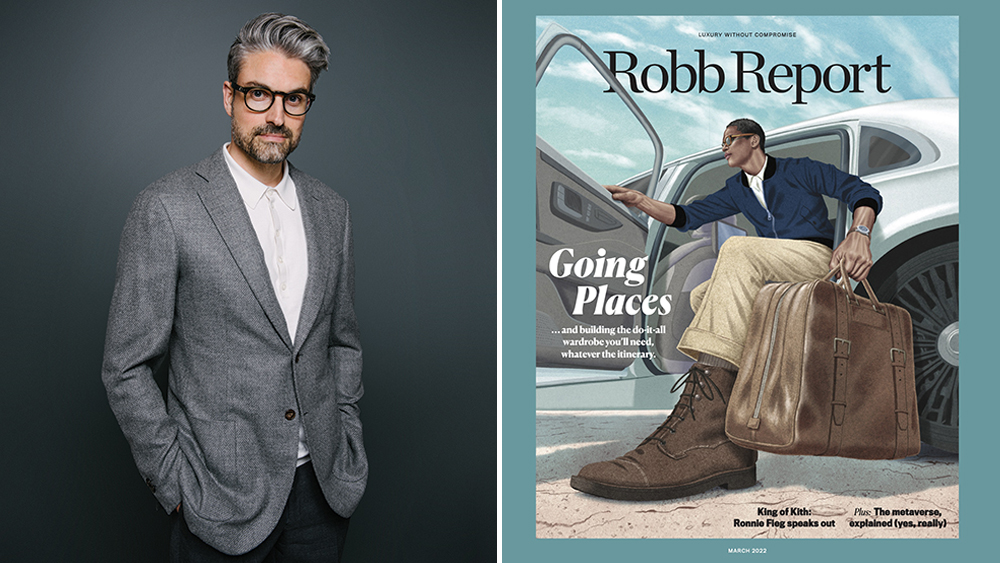 What I love about menswear in 2022 is that a well-dressed guy has total freedom and opportunity to wear what he wants—and look good doing so. If laid-back and languorous is your thing, there are sophisticated brands that will enable that. If you’re inclined more toward tailoring, that’s great too; there are many who will join you in such elegant expression.

Somewhere in the middle? Lucky you. Yours is the full panoply of fashion right now.

With that in mind, for this style issue we profile two men at very opposite ends of the sartorial spectrum. Ronnie Fieg is the brains behind one of the most captivating brands to become part of the luxury firmament in recent years. It would be easy to call Kith a streetwear label, and maybe it was, back when its stock in trade was sneakers and Timberlands. But in little over a decade, it has mushroomed into something more akin to a shoppable museum of cool. That may sound like hype (and we’ll get to that in a minute), but where else could you find, among the in-house clothing collections, collaborations with as seemingly random a mix of labels as Nike, The Simpsons, Calvin Klein, Wilson, Clarks, the New York Knicks, Petrossian caviar, Star Wars and Coca-Cola? The only thing that seems to link them is the sort of cultural cachet that is catnip to those of a certain age, who can celebrate the obsessions of their youth in a way that still feels relevant and, yes, cool.

Releasing small batches of product every week to a fervent faithful online and in lines outside its stores, Kith has mastered, intentionally or otherwise, the great marketing golden egg of our era: hype. But, as style editor Kareem Rashed discovers, Fieg takes umbrage at that claim. “Hype is not a conversation that we have within the company,” he says. Read our fascinating profile, here.

In contrast, Paolo Martorano is a young man in an old man’s game. A fifth-generation tailor (give or take a skipped ancestor), he set out on his own at the age of 25 after learning the trade at Paul Stuart and Dunhill and is now an established name in American bespoke, with a clientele of industry figures in finance, media and entertainment in New York and Palm Beach and, increasingly, on the West Coast. One such devotee is G. Bruce Boyer, a former fashion editor, an author and an authority on menswear, specifically the “needlecrafts,” as he calls them. Boyer found his own style early on “and pursued it from one tailor to another for decades.” There are few commentators on the subject of suits, sport coats and the like whom I trust more, so when he told me he was amazed by Martorano’s ability at such a young age (“In tailor’s years, he’s a mere child,” he says), I was intrigued (by the “hype”?). Boyer’s first piece for Robb Report can be read, here.

Another making his Robb Report debut is the actor Aldis Hodge, who writes poignantly about his 16-year journey into watchmaking and how, as a Black man in the very white horological world, he feels a duty to open doors for those who may follow in his footsteps. We asked him about the lack of inclusion and diversity in the watch industry, but as he points out, that’s the wrong question to put to him. To read his column, head this way.

Sticking with watches, we spotlight a new collaboration between menswear purveyor the Armoury and Swiss watchmaker H. Moser & Cie. The 56 pieces they produced together sold out within three hours in January, but I managed to secure the last one to make available to a Robb Report subscriber to purchase via lottery. It’s an unusual, gorgeous and rare watch—read to find out how it can be yours.

Elsewhere, don’t miss our essential guide to the bits of the metaverse that you should actually care about, learn why zero-carbon houses are struggling to take off, discover what’s buzz-worthy in Madrid, Vegas and Palm Beach, explore the latest trends in private-aviation interiors and peruse the new do-it-all wardrobe.