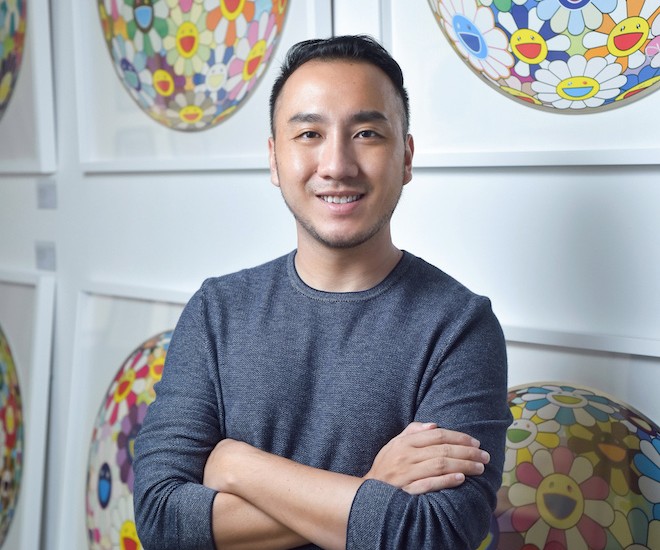 Set up during the height of the Covid-19 pandemic in 2020, All About Art (formerly Featurespace Art) is a Singapore-based gallery founded by Jonathan Toh. Initially, this venture started off as a weekend side hustle where Jon resold art pieces he collected from his previous stints abroad. Jon shared that the deals were conducted off his bay window for a period of time before he moved into a proper place of business.

The idea of starting an art business, to Jon, was a natural extension of his growing passion for collecting art pieces. He felt that there was a lack of transparency in terms of what was disclosed to buyers and the hidden costs that many didn’t know about. A sense of confusion was felt not only within the industry but Jon himself.

“I set myself a task of building a Murakami piece from scratch and I realised that there was a vast difference between what was a reasonable markup and then what the other galleries were trying to sell at.”

Having been through the process himself, Jon decided that the gallery would bridge the gap for both new and seasoned collectors alike. This approachable direction that Toh had decided upon enabled him to build a community for the gallery and that helped him to broaden his reach to new customers.

Being in architecture definitely boosted Jon’s confidence in giving advice to clients when they are looking for a new art piece. The perception of space, design and colours acted as a guideline for him and then he would offer suitable options for the customers to pick from. The objective was not to just close a deal, but in fact provide good options that matched the space, budget and aesthetics.

The transition from architecture to art dealing was a smooth one. Jon had always taken interest in art dealing and he also “grew less fond of plans and construction that will take two to three years”. The self taught-entrepreneur now finds gratification in the quicker turnover rate of the art industry, where new artworks are constantly created and placed in homes, giving the same kind of joy to people in their homes.

Apart from solely appreciating art for its beauty, Jon shared that valuing art for its investment aspect was a perspective that is on the rise amongst many collectors these days. This is similar to how cryptocurrency, watches and luxury cars are now perceived as alternative assets, contemporary art has now gain the same level of acceptance for the new age of collectors.

People who are into arts were often stereotyped by the masses to be of a certain age group, maybe those above the 50s. And to this group of art collectors, art is largely confined to the few key mediums. This notion, however, is not the case according to Jon, who observed that more people are more accepting of contemporary art styles and new mediums. Artists like Takashi Murakami, Roby Dwi Antono, Javier Calleja and others have all come up at the top of the list of many collectors.

Accompanying these artists is a younger demographic, Jon reckoned that collectors who frequent his gallery are between 30- to 42-years-old. This group represents a new wave of art collecting. “A very good mix of people buying for their first home, first office, to start a collection, trading out of their positions into other assets and taking art as another source of hobby where they can put serious money into.”

In Jon’s gallery, you will be able to find a bevvy of artworks from both established and emerging artists. Unlike other art galleries in Singapore, where there is this “invisible push” for local artists, Jon believes in pushing for what catches his attention, regardless of nationality and location. He is also open to recommendations of artists from collectors and partner galleries.

Only after establishing a genuine relationship with the artists will Jon consider working with them. Currently, the profile of artists that he represents comprises different nationalities such as British, Malaysian,Thai,Indonesian, Brazilian, Dutch, Russian and more. Aside from boasting a team of international artists, Jon also has a global fan base. The gallery had sent artworks to countries like Indonesia, China, South Korea and even Canada.

When mentioning art collecting and buying, NFT is an adjacent topic that often comes to mind and Jon is no stranger to this topic as a lot of customers have also asked about it. For Jon, “NFT is another vertical of art”. Instead of looking at NFT from a zero-sum approach, it should be a win-win because art in the physical world can still stand to gain from the emergence of this digital asset. The convergence of both NFTs and the arts is what Jon looks forward to the most. To him, it is the utility nature of these two assets that intrigues him the most.

Right now, Jon is still doing more research into how he can incorporate both elements into the gallery. A thought that sprang to mind for Jon was using NFTs as a digital authentication tool, where customers can authenticate their purchases. This is just one of several expansion areas Jon has for the gallery.

The recent rebranding of his venture also signalled larger goals he is trying to achieve. Featurespace Art has changed its name to All About Art, a progression from a “featured art space” to a business that will include other verticals of art like shows, art residency and logistics. Essentially, All About Art hopes to cover every aspect of the art collecting journey.

In the nearer term, the gallery will be holding an exhibition starting on 4 March and it will last for a month. Titled, “JOGJA: The Next Chapter”, it will showcase six emerging artists that Jon has brought on and is happy to share with the community.

The post From Architecture to Art Dealing, Jonathan Toh of All About Art Is Ready for the Future appeared first on LUXUO.