US President Joe Biden has called for a ceasefire in Ethiopia’s conflict in the northern region of Tigray.

Mr Biden demanded an end to “large-scale human rights abuses”. The fighting, now in its seventh month, has killed thousands and forced two million from their homes.

The US president also highlighted the possibility of famine.

The conflict pits the Ethiopian army and its Eritrean allies against a regional Tigrayan force.

How did the conflict begin?

Mr Abiy declared an end to the conflict after just a month, with the capture of Tigray’s capital, Mekelle. 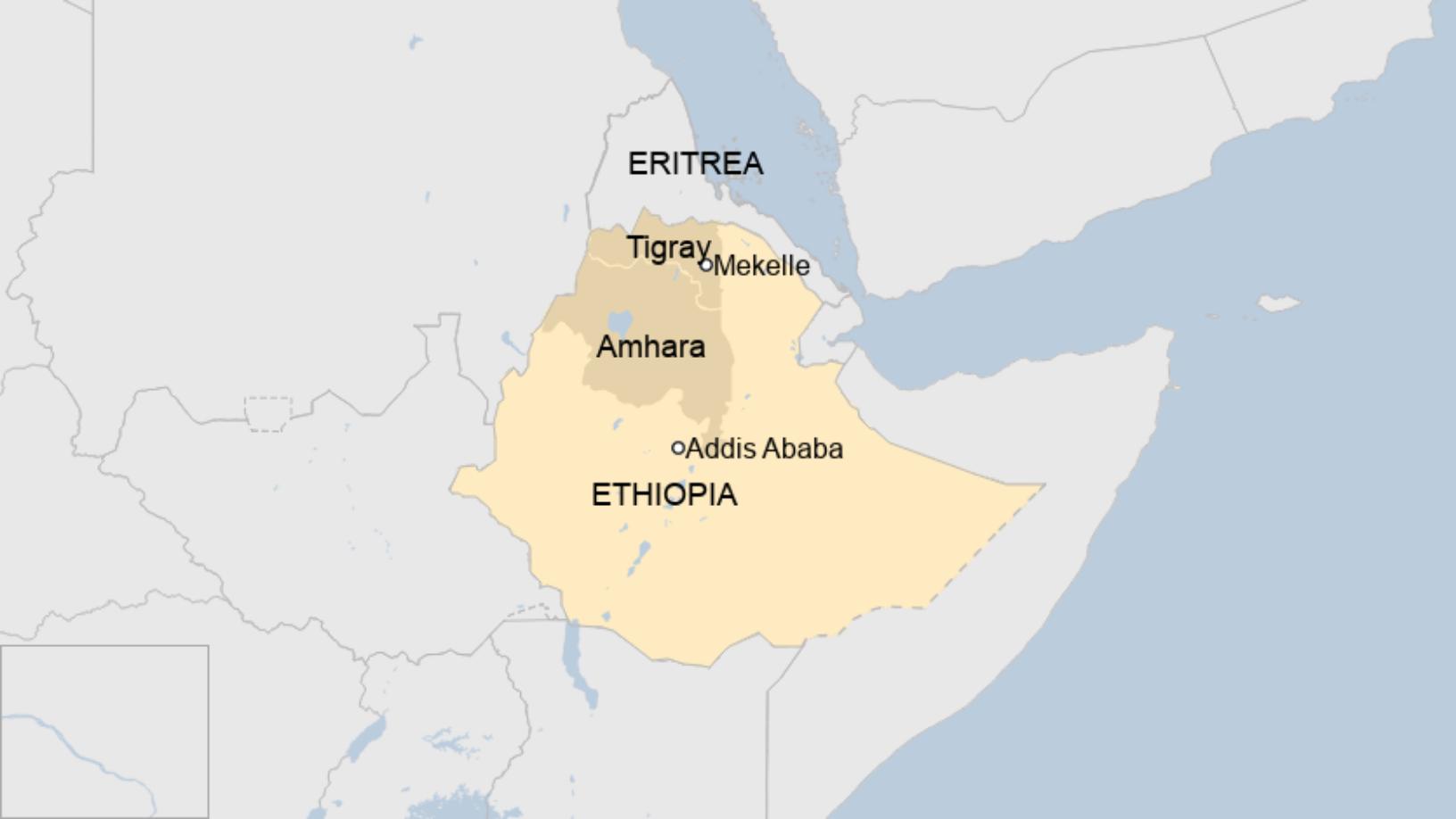 But more than half a year later, the picture looks very different as fighting continues.

There is no accurate death toll, but it is thought that thousands of people have been killed. More than five million need food assistance, according to the UN.

Ethiopian, Eritrean and TPLF soldiers have all been accused of human rights abuses.

What are the abuses being referred to?

In his statement on Wednesday evening, Mr Biden specifically mentioned “widespread sexual violence”. In April, the head of the UN’s humanitarian office, Ocha, Mark Lowcock said that it was being used as “a weapon of war” with women and girls being targeted.

The abuses were “unacceptable and must end”, the US president said.

Earlier this week, hundreds of people displaced by the fighting were detained after being rounded up by soldiers, eyewitnesses said. Ethiopian military officials dismissed the allegations, calling them fabricated.

The Ethiopian government has accused the TPLF of killing aid workers and looting food.

The US president also said he was “deeply concerned by the escalating violence and the hardening of regional and ethnic divisions in multiple parts of Ethiopia”. There are numerous conflicts across the country as Ethiopia prepares for national elections on 21 June.

What has the Ethiopian government said?

The government has not yet responded to Mr Biden’s statement.

It did react on Monday to the US decision to impose visa restrictions on Ethiopian and Eritrean officials and others who were accused of atrocities.

The foreign ministry said the move was “regrettable” that could “seriously undermine” US-Ethiopia relations.

In a long Twitter thread on Tuesday, the government argued that while it was rebuilding Tigray, “remnants” of the TPLF continued to destroy the new infrastructure.

9 facts people tend to forget about the operation in #Tigray:
TPLF had rejected many calls for dialogue w/ the gov’t, mocked efforts of #Ethiopia‘s respected elders & PM @AbiyAhmedAli. But some still think talks w/ the defunct group would be a magic wand to pacify Tigray. (1/9)

A shift in US-Ethiopia relations

Mr Biden’s comments are the strongest yet from the US about the conflict in Tigray and come as relations between Washington and Addis Ababa continue to deteriorate.

They illustrate a shift in relations between the two countries who were close allies in the war on terror across the Horn of Africa.

Ethiopia may not yet have yet reacted to the latest remarks, but Addis Ababa is in general resistant to calls such as Mr Biden’s.

The government has in the past rejected the idea proposed by some of holding a dialogue with the TPLF, which was recently designated in Ethiopia as a terrorist group.

What are Eritrean troops doing in Ethiopia?

Mr Biden called on Eritrean forces to withdraw from Tigray, as well as fighters from the neighbouring Amhara region.

In March, Mr Abiy acknowledged for the first time that Eritrean soldiers were in Tigray following months of denial from both countries. The prime minister told MPs that Eritrea had been concerned about attacks from TPLF fighters.

There is a long-standing animosity between Eritrea and the TPLF which stretches back to the 1999-2000 border war between Ethiopia and Eritrea. At the time the TPLF was the leading party in Ethiopia’s governing coalition.

Rights groups allege Eritrean soldiers have committed atrocities in towns like Aksum, which include killing unarmed civilians, raping women and the widespread looting of public and private properties.

Two months ago Mr Abiy said the Eritreans would leave, but they have still not withdrawn.

Why is there talk of famine?

There is growing concern about the possibility of food shortages.

“There is a serious risk of famine if assistance is not scaled up in the next two months,” Mr Lowcock told the UN Security Council this week, the AFP news agency reports.

He said that estimated that “over 90% of the harvest was lost due to looting, burning, or other destruction, and that 80% of the livestock in the region were looted or slaughtered”.

Large Protests Against Health Passes Hit France for a 2d We