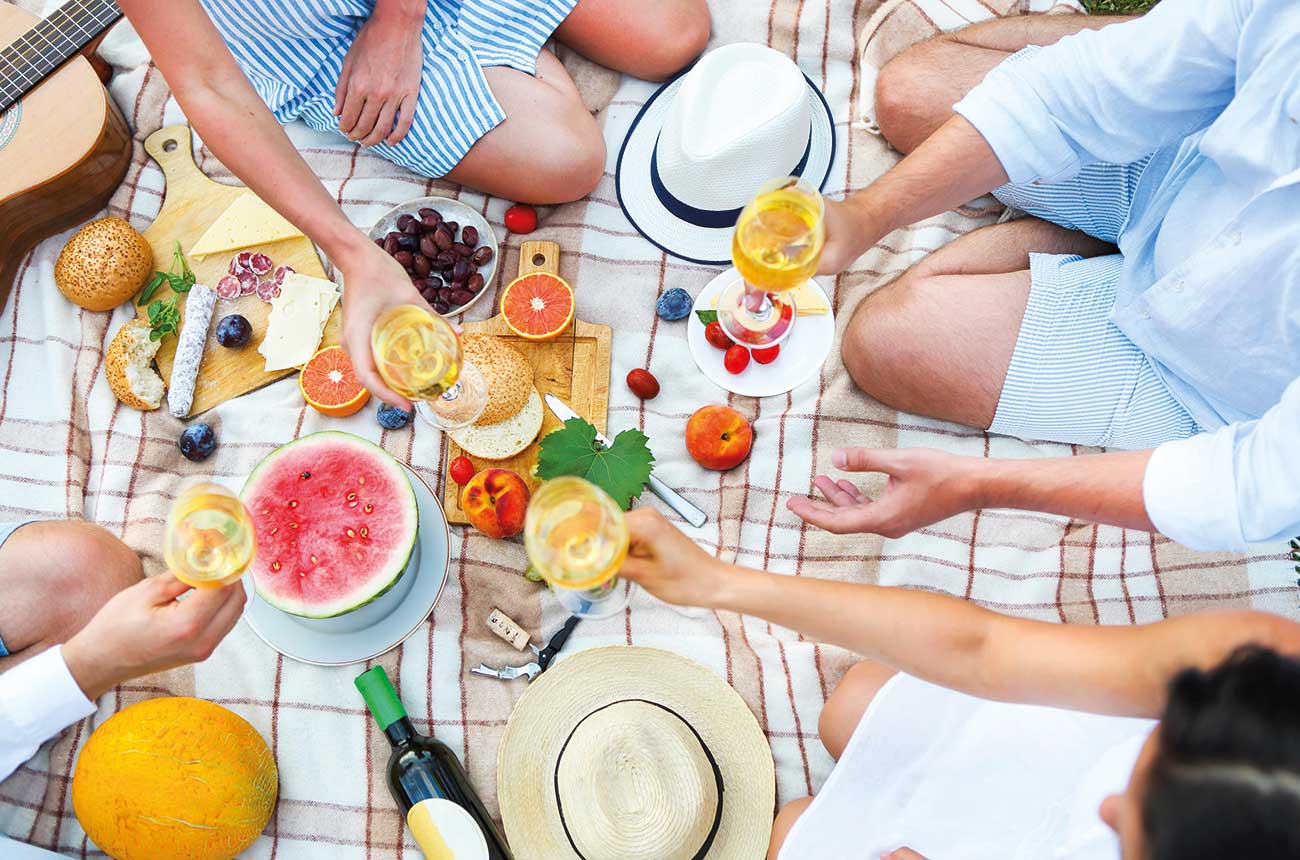 According to lifestyle and happiness guru Gretchen Rubin, you ‘bring your own weather to a picnic’. Ms Rubin, I’d suggest, has never shivered under a tree watching raindrops turn her fish-paste sandwich to mush because the weather forecast was wrong.

There are, it’s safe to say, picnics and Picnics. It’s a term that takes in everything from a rubber baguette in a French ‘Aire’ off the Autoroute du Soleil to a four-course spread while listening to opera at Glyndebourne.

What’s definitely true is that the Picnic As Event is enjoying something of a resurgence. With travel largely off the table for the last two years, and bars and restaurants intermittently shut, people have had to get their fun in other ways, often involving a large tartan rug, plastic glasses and screaming children being chased by wasps.

If you’ve actively decided to go and eat en plein air, then something decent to drink is very much part of the equation. Unless, of course, you’re Edouard Manet. His Le Déjeuner sur l’Herbe painting – the most controversially famous picnic of all time – appeared to feature nothing but some bread and apples and, apparently, not enough clothes to go round.

So assuming that we can’t, disappointingly, learn from impressionist artists in this matter, how do you get your drinks offering right? 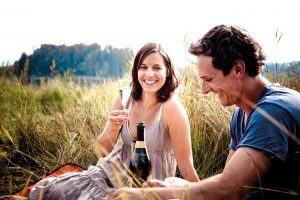 ‘Thousands of picnic experiences are wrecked every year by the whole “who’s got the corkscrew..?” exchange’

Before we go off selecting bottles, understand that picnics are largely about logistical preparation. So if you’re the kind of person who starts assembling an Ikea wardrobe without checking you’ve got all the components first, you need to have a word with yourself.

When serving drinks at home, everything is to hand: bottles, glasses, corkscrews. And of course, it’s easy to get everything to the right temperature. None of this is true for a picnic. The corkscrew issue is, in theory, easy to solve. But thousands of picnic experiences are wrecked every year by the whole ‘who’s got the corkscrew?’, ‘I thought you had it’ exchange.

Fear of forgetting one is probably an actual phobia, so if you’re prone to utensil amnesia it could make sense to consider bottles with screwcaps or stoppers. And always keep a spare corkscrew in your wine carry bag.

Which brings us to the question of how you transport your drink – something that will probably depend on the scale and nature of your picnic. If you’re going for the ‘full wicker hamper’ approach, chances are you will be driving to a spot fairly close to where you’re actually eating. In which case you’ll probably be going down the thoroughly civilised ‘ice box and proper glasses’ route. Ice boxes are heavy and cumbersome, but they are a) much lighter to carry back once all the bottles have been emptied and the meltwater disposed of, and b) can form a very useful impromptu seat for those who don’t like sitting on the grass for several hours.

If your picnic requires a longer walk, or is just less formal, I’d strongly recommend a bottle carrying case. These can be slung over one shoulder or carried with a handle.

There are fancy padded ones that can safely transport a bottle and two (glass) glasses, and less robust versions that will easily let you carry two, three, four or even six (!) bottles.

Levels of insulation, durability and carrying styles vary, but there are lots of good options around £20-£30 so it’s worth doing a bit of research and picking a model that fits your requirements, such as the Croft Collection Wine Bottle Cooler Bag (£20 John Lewis), Kato Tirrinia 6 Bottle Wine Cooler Bag (£24.99 Amazon) or Greenfield Collection Contour Wine Cooler Bag (£22.99 greenfieldcollection.co.uk).

Some of these wine carry cases come complete with their own strapped-in plastic serving glasses. These might be hard-wearing, but they’re also often rather dowdy. Champagne houses, in particular, tend to have conniptions at the thought of their precious elixir being served in anything other than bespoke Champagne flutes.

Fortunately, there is a halfway house. GoVino glasses have been specially developed for outdoor drinking. They’re plastic (meaning they’re durable) but thin and don’t have a stem, so they’re harder to knock over. They look like the bowl of a decent-sized wine glass and should do justice to even really good wine (from £10.50 for a two-pack of white wine glasses, govino.co.uk). 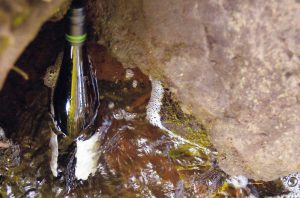 ‘Use lakes/ponds/streams as a free cool box, and wedge your bottles in there before opening’

Arguably the biggest challenge for picnics is getting your drink to the right temperature. Ice buckets or (more likely) ice boxes are the ideal solution, although both are somewhat cumbersome. Chiller sleeves can be a good alternative. Popping a bottle in the freezer for 20 minutes, then putting a chilled sleeve over it will help keep your wines cool for a while. Good ones to look out for are the Rapid Ice Wine Bottle Cooler (£11.99 Lakeland) or the Le Creuset Wine Cooler Sleeve (£24 John Lewis).

If you’re taking an ice box with you, it’s worth remembering two things. Firstly, wine cools faster in iced water than just ice (and even faster if you add salt); and secondly, a big hunk of ice melts far slower than smaller cubes. So, mixing fast- melting cubes with a slower-melting block will give you ice that chills fast, stays cold, and also allows you to hack chunks off the block for cocktails. Try the Lakeland Giant Ice Cube Tray (£12.99 Lakeland), or for a huge block of ice try a silicone sandwich loaf mould, such as the Lakeland Silicone 2lb Loaf Pan (£11.99 Lakeland).

It’s worth chilling your reds down a bit too. Most red wines are served too warm even in the home, so if a bottle is sitting outside, the most watery British sunshine could still quickly turn your juicy Fleurie to alcoholic soup.

If you’re going somewhere with water, it can be a really good idea to use lakes/ponds/streams as a free cool box, and wedge bottles in there before opening. Just make sure you’ve tied a string round the neck and secured it to something immovable such as a tree or slumbering family member.

A damp tea towel wrapped over a bottle doesn’t just help keep a bottle cool once it’s opened – it also helps protect against light-strike. It’s a wine fault that isn’t well known, but light-strike is a very real issue for wines when they’re drunk outdoors. According to David Way, senior wine qualifications developer at the Wine & Spirit Education Trust, it’s caused by ‘UV radiation and certain wavelengths of visible light reacting with some compounds in the wine to form volatile sulphur compounds’. Basically, your wine smells of overcooked cabbage.

Dark bottles (green or brown) offer good protection, but clear glass is far more likely to be affected. This is bad news for that lovely summery bottle of rosé that you’ve packed, so if you can, treat it like a pale-skinned toddler and keep it wrapped up against the UV rays. 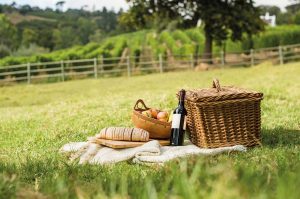 Having covered the logistics, let’s turn to the drinks themselves. Happily, picnics are not a place for hard and fast rules. Picnic food can vary massively, from smoked salmon and roast chicken to dips and pitta bread from the local supermarket – sometimes within the same occasion.

As such, matching – in as far as it exists – is probably as much about pairing the people and the occasion as it is with getting too caught up in finding the perfect partners for food.

Personally, I think fizz is essential, since it adds a sense of louche decadence to any occasion. Champagne is the obvious and most prestigious choice, but English sparkling sometimes has the light, breezy waft of the hedgerow to it, making it feel as though you’re drinking your surroundings.

And for more relaxed affairs, don’t discount the idea of a pét-nat (pétillant naturel) – particularly if you’re out with a younger crowd. Zesty and informal, they’re outdoor quaffing wines par excellence (look out for our guide to pét-nat in Decanter Magazine: August 2022 Issue).

For aperitifs, it’s well worth putting a few pre-mixed cocktails into your chiller as well. G&Ts in cans are obvious, but lots of people prefer the likes of a Mojito or Negroni over glasses of wine. Pre-mixed Taylor’s Chip Dry [white Port] & Tonic covers both bases. Cans have the advantage of being easy to transport, quick to chill and drinkable without a glass.

In fact, canned wines can be a good option too. They’re great for the impromptu ‘grab and go’ picnic, where they can be chilled with a sleeve and stuffed in a carrier bag. And they’re small enough to be chilled in a tupperware box filled with ice.

But they’re also a good way of providing some variety. Having six different wine styles, each available in a 250ml (large glass) size, should mean everyone gets more or less what they want. This is handy, because while hot weather should logically mean refreshing, zesty whites, some of your party may still prefer to drink richer reds. This is particularly true if your ‘picnic’ is actually an outdoor barbecue (don’t write in), but if you’re out ’til late, people will want fuller wines as the temperature drops.

As a rule of thumb, it’s probably wisest to veer towards wine styles that drink well both with and without food and are not too high in either alcohol or tannin, since both elements are exaggerated in the heat. Muscadet, Picpoul, Chablis, Sauvignon Blanc, Rueda and Soave are all good starting points for whites; Riesling, Albariño and Assyrtiko will get you additional cred points if you’re pouring for a wine-literate audience.

For reds, crunchy midweight styles are safest. Pinot Noir, Beaujolais and Loire Cabernet Franc are all tried and tested. Mencía, Lagrein, unoaked Grenache/Garnacha and – a personal favourite
– Cerasuolo from Sicily do the same job but with more imagination. If you want something richer, a Mendoza Malbec will give red-lovers a bramble- fruited hug.

In general, mixing something decadent (sparkling/cocktails) with something refreshing and something quirkier should tick most boxes, provided you get the temperature and glasses right.

Nobody is there for the drink – but they’ll notice it if it’s good. ‘It’s an opportunity for a bit of preening,’ says Corney & Barrow associate director and buyer Rebecca Palmer. ‘For showing what you are capable of.’

And let’s face it, you could hardly do a worse job than Manet.

Picnic suggestions from a pro

Formal ‘hamper’ picnic
With more formal ‘caterer’ food you need wines that match the occasion, so ‘classics’ such as Burgundy, Sancerre, Pouilly-Fumé for whites, Burgundy and a (not too heavy) claret. For rosé, top Provence – and at least a half-bottle of Champagne!

Informal ad hoc ‘grab and go’
This depends on who else is going to be there – and how many of them there are! Kiwi Sauvignon or juicy Pinot Noir are both good with snacks, and opting for screwcap bottles makes sense. But for memorable decadence, how about a really good bottle of Champagne?

• More than 50 UK wineries have picnic areas. For further details, see Explore Our Vineyards on the Wines of Great Britain website.

The 10 rules of food and wine pairing by Karen MacNeil

The post Decanter guide to picnicking for wine lovers appeared first on Decanter.